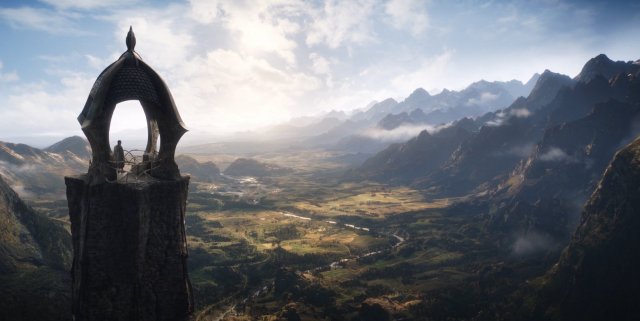 Warning: Spoilers ahead for Lord of the Rings: The Rings of Power, episode eight.

Season one for Amazon’s greatly anticipated and debated Lord of the Rings prequel Lord of the Rings: The Rings of Power is finally finished. Before it got underway the series’ showrunners promised that their adaption of Tolkien’s work would be a new version of the beloved Middle Earth, obviously in a vain attempt to stop comparisons from being drawn between Peter Jackson’s renowned Oscar-winning movie trilogy, and allow people to come into the series with an open mind. Despite this, we couldn’t help but notice some nostalgic similarities where the show seems to tip its cap at the films.

Now The Rings of Power has done a great job of bringing its own angle to Tolkien’s writing. The races in general feel like they have been explored a lot more in the series with fans thrilled to get to see a more nuanced look at the dwarves, a slightly different take on the elves, and more of the orcs in general.

That isn’t to say the show is without its similarities, and how could there not be with both the movies and the series originating from the same mind and are set in the same world? Here are some moments from the series where either the storyline, a visual shot, or the relationship between characters took us back to the iconic movie trilogy.

1. The friendship between a dwarf and an elf

This is an obvious comparison to make, and one that many have pointed out, the friendship between Elrond and Durin IV definitely gives us Legolas and Gimli vibes, and fans are absolutely here for it. Though Legolas and Gimli’s friendship was written by Tolkien and adapted directly for the film, the same can’t be said for Elrond and Durin’s relationship, which was written specifically for the series.

The two share an almost brother-like bond, with both of them showing a huge amount of trust and respect for one another. Their back-and-forth banter is heartwarming, and though a little different from that of Legolas and Gimli’s competitive one-upmanship, it is equally as charming and fun to watch.

2. The man who does not want to be king

Early on in the show, many compared Halbrand to Aragorn, both are rugged enigmatic men, disguising their royal identities and running away from their true calling, to be a king to their people as they believe themselves unworthy. Halbrand masqueraded as the rightful King of the Southlands who seemed unwilling to take up his mantle, and Aragorn, the rightful King of Gondor, feels similarly.

However, when the time comes that their people truly need them though they rush into the battle and take their place as King. Now, this has been well and truly debunked thanks to that season finale reveal, but it doesn’t stop the similarities that were created before we found out he was the Dark Lord all along.

This is not so much just a similarity as it is a trope of storytelling, however, the somewhat taboo love between a human and an elf is a big part of both the trilogy and the series. In Lord of the Rings we have the love between Aragorn and Arwen, one that is initially frowned upon by her father, but love conquers all, and the two end up together at the end of the story. In Rings of Power, we have the elf warrior Arondir and the human Southlander Bronwyn.

This relationship is difficult for numerous reasons; the elves have been watching over the Southlanders for some time, thanks to their ancestor’s role in the past, leading to a build-up of resentment between them, and Bronwyn also has her son Theo to consider. Whilst many of the dynamics are different, the central theme of an elf and a human loving one another against the odds is exactly the same in both adaptions.

In The Fellowship of the Ring, the cloaked Black Riders are seeking out the One Ring with their search leading them directly to Frodo Baggins of the Shire. Frodo is forced to leave his home accompanied by his gardener Sam, with the addition of Merry and Pippin. The Hobbits are chased by these mysterious cloaked figures, which they later find out are the Nazgûls in disguise. In Rings of Power our Harfoot friends are also being followed by mysterious cloaked figures, this time dressed in white, as they seek a who, rather than a what, The Stranger who accompanies the Harfoots on their nomadic voyage.

Where fire brandished by Aragorn was highly effective against the Nazgûls, the Harfoots have less luck with the white-cloaked beings taking the fire and using it to set their caravans ablaze. At least they get off a little easier than Frodo who was stabbed by a Morgul-blade.

5. Renewed shall be the blade that was broken

One of the great relics in Lord of the Rings is the blade of Gondor, the broken longsword Narsil. In its broken, fragmented state it symbolizes the fractured strength of men and upon its reforging signifies the return of the King of Gondor and the beginning of the Age of Men. Rings of Power has a similarly broken blade, but its origins are in something far darker. This is Sauron’s blade, hidden in the Southlands all this time.

Rather than being reforged by smiths, it uses magic and blood to become whole once again, and upon returning to its original state spells the return of Sauron and the destruction of men. It is as if these two swords are both parallels and yet opposites of one another, a perfect example of yin and yang.

In episode seven, fans quickly noticed parallels between the events happening to Isildur and those that happened to his many-times great-grandson, Aragorn, in The Two Towers. In season seven, all believe Isildur to be dead after a burning building landed on top of him, and he was mourned by his friends and father, just as Aragorn was when he took a little tumble off the cliff. Isildur’s horse, Berek, appearing restless and now riderless, was set free despite Elendil’s entreaties and galloped off.

Now fans believe that just as the horse Aragorn released, Brego, came back to save him, so too will Berek save Isildur, for we know he can’t be dead just yet. Though it hasn’t actually happened yet, fans are sure this is how Isildur’s story will also pan out, we just have to wait until next season to have it confirmed.

7. Hiding from the enemy

In a specific scene from episode seven, Galadriel and Theo hide under a fallen tree from orcs following the destruction wrought by the erupting Mt Doom. The two hold completely still in silence as an orc above sniffs the air only to smell ash. The tension in this scene, not to mention the staging, was highly reminiscent of a scene from early on in The Fellowship of the Ring where the four hobbits hide under a large tree’s roots from the Black Rider that hunts them. The cloaked figure also sniffed the air above them as the hobbits held still in fear, the tension so thick you could cut it with a knife.

8. Sauron is coming… believe me

At the beginning of The Fellowship of the Ring, Middle Earth has known peace for a long time, the last whispers of Sauron have been lost to legend and many believe him to be truly gone, all except Gandalf, who is convinced that something is afoot and goes out of his way to investigate further despite Saruman cautioning him against it (we know why).

We also see this exact parallel playing out at the beginning of Rings of Power, this time it is Galadriel who is hell-bent on convincing others that Sauron has not truly gone and tries in vain to convince her King, Gil-galad, that they must muster together to face him, only to be ignored.

9. The staff is mightier than the sword

We finally got to see a true magic battle in the season finale between The Stranger (looking very much like he is actually Gandalf) and the white-robed people (who appeared to be from the unseen world). Believing The Stranger to be Sauron, but lacking awareness, they battle against him as he tries to protect the Harfoots that have come to save him. The Dweller appears to be the strongest of the three and, using the staff, tosses The Stranger around, much like how we saw the wizard battle play out between Saruman and Gandalf in The Fellowship of the Ring.

Upon discovering that they were mistaken about The Stranger’s identity (that’s a lot of wasted energy on their behalf) The Stranger uses white light magic and the staff to cast them back similar again to the way Gandalf repels the Nazgûl in Return of the King.

Many have compared this show’s offering of Galadriel (Morfydd Clark) to that of The Lord of the Rings’ Galadriel (Cate Blanchett). Some have said she seems a little less wise and serene and a bit more gung-ho, with many seeing it as a flaw, whereas others have pointed out that Blanchett’s version did show us a glimpse at what she was hiding beneath that serenity, a beautiful and deadly warrior.

The season finale took that similarity one step further when Sauron offered for Galadriel to join him as his queen, even quoting the same words Galadriel would repeat thousands of years later to Frodo, especially this line, “stronger than the foundations of the earth.” In rejecting him she showed her true strength as she screamed into his face, finally, here is the powerful elf we know her to be.

None of these similarities feel like lazy writing though, in any case, it is exceedingly hard to write something completely original, let alone when adapting from the same source material. The Rings of Power has done enough to create a Middle Earth that feels familiar but is still fresh and exciting, showing us sides to known characters that we hadn’t seen before, or exploring new friendships or conflicts.

It wouldn’t be surprising if fans continued to see these kinds of similarities continue to pop up throughout the entire series, but as the show starts to really pick up the pace we will hopefully get to dig deeper into the various stories which will allow their own nuanced differences to shine all the brighter.