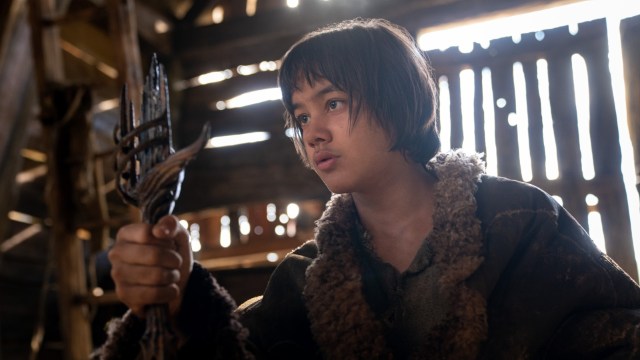 One of the greatest mysteries in Lord of the Rings: The Rings of Power involves the mysterious dagger with dark power. Although its true purpose has remained elusive since the beginning, more details have been revealed and it’s shaping up to be one of the most important aspects of the story overall.

There are many powerful swords in The Lord of the Rings, and it’s no different here. The young Southlander Theo (Tyroe Muhafidin) finds the black sword hilt in a local barn. When a drop of his blood falls onto the hilt, the symbol Galadriel (Morfydd Clark) has been searching for glows forebodingly and it regenerates into a full sword.

The symbol on the sword was also carved into Galadriel’s fallen brother Finrod, and was seen in Sauron’s northern fortress in Forodwaith when she took her band of Elves through the snow-covered terrain. During the War of Wrath, the people in the Southlands sided with Morgoth (Sauron’s master) and the area will become Mordor in the future, so all signs point to this being a pretty bad omen.

Theo decides to keep this sword a secret, even from Arondir (Ismael Cordova) who could offer some insights as to its origin. There’s great tension between the Southlanders and Elves, so the boy isn’t all that trusting of him. In episode four, “The Great Wave,” we finally start to get some answers. An old man named Waldreg tells Theo, “It is no sword. It is a power, fashioned for our ancestors by his master’s own hand.”

Theo goes back to the abandoned town for a food run when he’s set upon by an orc. He uses the dagger, and flames burst from it and it regrows. An orc tells the others that Theo has the hilt, and it further signifies that this blade is bad news because of how badly Adar (Joseph Mawle) and the orcs want it. Arondir had been captured along with other elves by Adar’s dark forces. The leader known as the “Lord-father” speaks with Arondir, and although he doesn’t reveal much about himself, he releases Arondir to take refuge in the watchtower of Ostirith. It’s all starting to add up.

After Arondir saves Theo, the boy finally feels comfortable enough to show him the hilt. Arondir recalls having seen a similar weapon inside the Elven tower Ostirith where they would watch over the Southlands. In the mountain wall was a another sword of an equivalent make, which means it’s likely from the war against Morgoth. Arondir reveals the sword is old and made from some forgotten craft and the hilt is in the shape of the watchtower. It was used to enslave the Southlanders and it was a key pointing to something below the tower. The sword in Ostirith has been rendered inactive, while Theo’s sword is still seeking to fulfill some dark purpose. It’s been whispering to Theo and leading him towards something treacherous.

There’s still a lot of questions surrounding Adar and his ultimate goal, but it’s clear that he too wants that sword. The orcs refer to him as the “Lord-father” and he could want to rule Middle-earth himself, or he could be working for the Dark Lord. He’s been commanding his armies to destroy settlements across he Southlands, striking fear and enslaving people to accomplish his dark deeds.

When Adar in Tirharad, a group of villagers led by Waldreg who have left the new society set up in the Elven watchtower approach Adar and pledge their fealty to him (thinking he’s Sauron). Waldreg is commanded to kill Rowan to prove his loyalty and he obeys. Waldreg, who told Theo of the sword’s importance, and Adar, who sent Arondir back to the Elven tower, are now united.

All signs point to this sword having been forged by Morgoth to be the key that will bring about Mount Doom for evil to spread throughout the Southlands. After Morgoth’s defeat, Galadriel continued her hunt for evil, following the symbols pointing to his reemergence. What she comes to find out is that the location of where this new battle is taking place is of equal importance. When Galadriel is researching at Númenor‘s Hall of Lore, she realizes that the symbol is no sigil, it’s a map of the Southlands. Galadriel and the seaguard are traveling back to Middle-earth to stop this spread of darkness and the sword rests in the center of this conflict.

The sword is like the One Ring, a powerful item also made by dark forces. It beckons its owners to do its bidding and drives them down dangerous paths. Sauron once wielded this blade and it’s an essential part of the plan to take over Middle-earth. The war is just getting started.

The Rings of Power is available to watch on Amazon Prime.