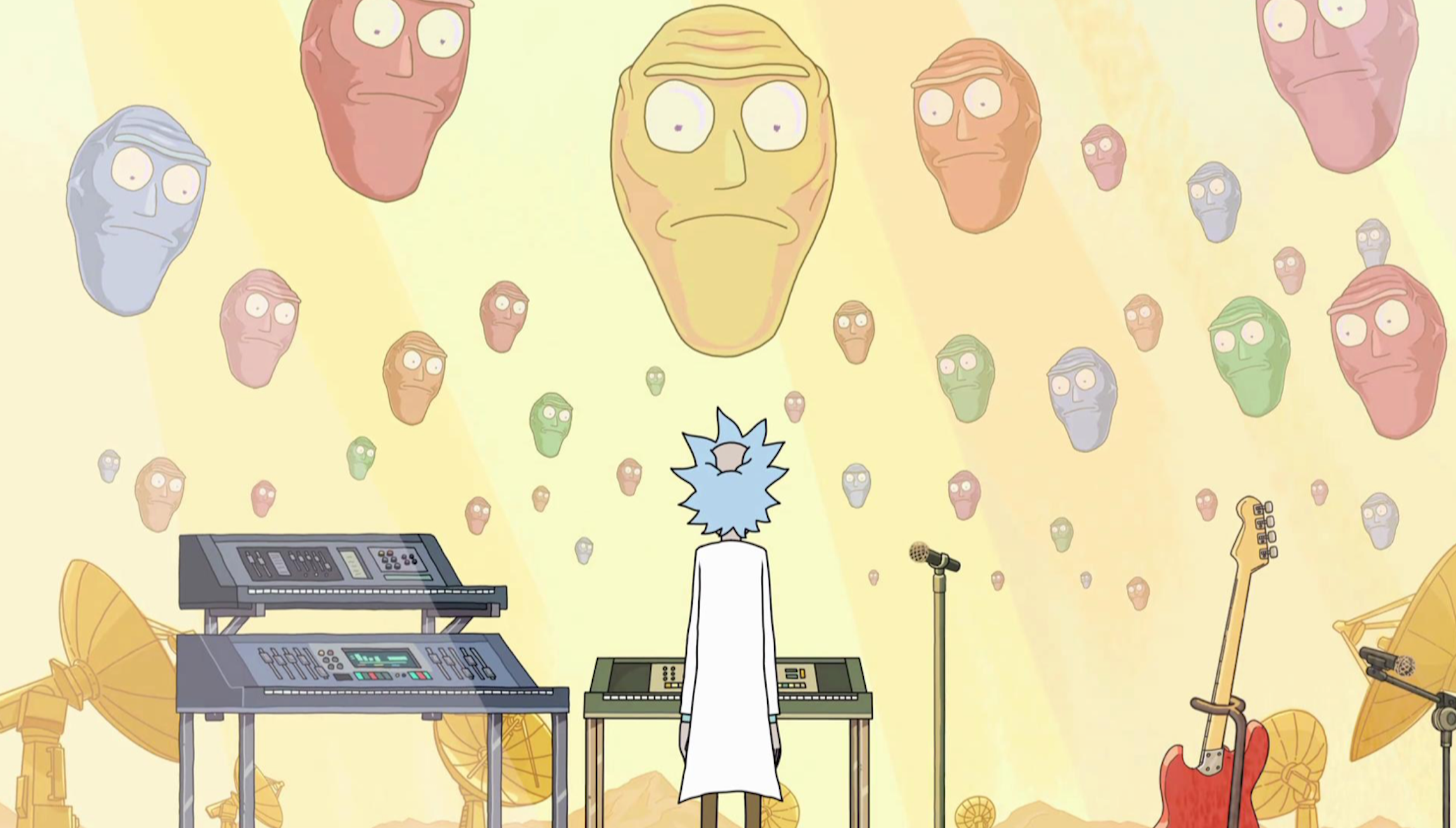 Rick and Morty is an adult animated television series. The sitcom was created for Cartoon Network’s nighttime programming and is going on its sixth season. It follows the misadventures of Rick Sanchez, a mad scientist and anarchist, and his amiable grandson, Morty, as they travel the universe at Rick’s whim. They get into all sorts of trouble, many times at Morty’s expense.

It’s a rude, offensive, and utterly hilarious show worth the watch, especially if you’re the existential type who enjoys late-night binging of a show that will have you thinking about existence and the metaphysics of the universe. So, without further ado, here are the top 10 episodes from Rick and Morty.

Rick and Morty and flying their ship through space when Rick decides to stop on an alien planet for windshield washer fluid. They soon discover that this planet is a purging planet, meaning once a year, they have “The Festival,” during which crime is condoned. The citizens engage in open warfare, murder, and anarchy.

Unfortunately, Rick’s morbid curiosity gets the better of him, and he proposes that he and Morty stay to watch. Although Morty refuses, Rick ignores his pleas and stays. These negligent actions result in their downfall as they’re stranded on the planet and must survive until they get home or the festival ends.

It’s Christmas at the Smith house, and the regular shenanigans continue. Jerry must deal with the realization that his parents have brought a third person, James, into their relationship.

As Jerry attempts to comprehend his parents’ new, unorthodox love life, Rick shows up with a homeless man in a Santa outfit, who he briefly introduces as Ruben, then takes him to the garage. Rick then shrinks Morty and sends him on a ship into Ruben’s body. Morty finds a Jurassic Park-style amusement park where the attractions are Ruben’s various body parts.

However, after Ruben dies, Morty and a crew of those building the park must escape before his death causes their death.

Jerry complains that the family dog, Snuffles, is stupid, so Rick creates a device that will increase Snuffle’s intelligence. However, Jerry didn’t get what he bargained for as the dog’s sentience causes it to rise up against the family and overthrow humans.

Simultaneously, in an Inception-like fashion, Rick and Morty enter the dreams of Morty’s math teacher, Mr. Goldenfold, to convince him to give Morty an A in math. They dream hop and meet bizarre characters such as Mrs. Pancakes, a strong black woman who is a TV character, and Scary Terry, a parody of Freddy Krueger. But when they get stuck in Mr. Goldenfold’s deviant dreams, they must go through great lengths to make it out alive with their lives, and Morty’s ‘A’, intact.

After a particularly perilous adventure, Morty tries to swear off all future excursions with Rick until Rick agrees to go on a fun, light-hearted adventure. However, before Rick and Morty can depart on their whimsical escapade in a fantastical land, the Smith family starts bugging Rick to help with mundane tasks that he views as beneath him. To get out of his responsibilities, Rick gives the family a Meeseeks Box, which can produce as Meeseeks whose primary goal is to solve the user’s problem. This goes awry when Jerry requests the Meeseeks help him get two strokes off his golf game. When the Meeseeks can’t help Jerry with his subpar golfing skills, mayhem and chaos ensue as more Meeseeks are conjured up who get progressively more disillusioned with their situation.

Meanwhile, Rick and Morty embark on their “fun-filled” adventure where Morty’s fantasies of a pleasant experience that didn’t end in pandemonium. As usual, things don’t go according to plan, and Rick and Morty end up in far hotter water than they expected.

Jerry eats a pint of Cherry Garcia in Rick’s freezer drawer, finds that it contained dangerous bacteria, and is rushed to an alien hospital for treatment. While waiting for Jerry to be treated, Rick smashes the waiting room cable box and hooks up the interdimensional cable. What follows are ridiculous scenarios such as Man vs. Car, a TV show in which a man battles a car, and a “Lil’ Bits” commercial advertising a restaurant that specializes in serving little food dishes to people with little mouths.

Meanwhile, Jerry makes the mistake of agreeing to help a man by the name of Shrimply Pibbles by donating his penis, which is the perfect fit for Shrimply Pibble’s failing heart. Once he realizes his blunder, he tries to weasel his way out of the situation by pleading with his wife Beth for her interference and using a piece of Shrimply Pibble’s medical information to try and turn the crowd against him.

The nonsensical nature and the fact that this episode was improvised make it worthy of being one of the top 10 episodes.

Rick tracks in a nasty infestation of aliens that can implant memories into people’s minds. As a result, the Smith house is locked down until they can eliminate them. What follows is violence and the Smith family is left wondering if any of them are real. But the ones who aren’t real are humorous characters such as Sleepy Gary (Beth’s fake husband who is engaged in an affair with her real husband, Jerry), an interesting rendition of Frankenstein’s Monster, and Mr. Beauregard, the family’s “Butler.”

The concept was based on the addition of Dawn’s character in Buffy the Vampire Slayer. One of the writers found the idea of implanting memories disturbing, and so this episode was created.

During breakfast one morning, Morty reveals that one of the school lunch ladies was found dead, her body having been drained of blood and her neck possessing bite marks, indicating a vampire attack. After Summer requests that Rick transport his mind into a teenager to come to school and apprehend the vampire, Rick shoots down the plea with derision. However, after further consideration, Rick complies with Summer’s entreaties and transports his mind into a younger version of himself who he’s given the moniker “Little Rick.” Rick, Morty, and Summer then go on the hunt for the vampire, throw parties, and attend a school dance as Rick struggles with the consequences of being an angsty teenager.

Simultaneously, Beth and Jerry go “off-planet” for marriage counseling where they don a helmet that renders their perception of each other real. The results are hilarious with Jerry’s perception of Beth resembling the Xenomorph queen from the Alien franchise, and Beth’s perception of Jerry being a spineless worm who cowers at the slightest provocation.

Rick, Morty, and Summer are on an alien planet for a movie showing when Rick discovers an issue with his car battery. As a result, he and Morty go into the battery and visit its inhabitants who create the energy by stomping on Gooble Boxes. Meanwhile, Summer stays in the car after Rick orders the vehicle to “keep Summer safe.” This proves to be more complicated than expected, as the car takes its assignment very seriously and kills and maims people in the process.

Back in the microverse, Morty is hesitant to condone the practices Rick employs to keep the occupants powering his car battery. Morty describes the practice as “slavery with extra steps”, which Rick denies even after they find the individual who created a technology similar to the Gooble Boxes which renders them obsolete.

It’s an existential episode and begs one to consider the question, “what if we’re in a simulation”. Indeed, the whole show wrestles with many hypothetical questions having to do with human existence. That alone makes this episode one of the best.

After giant heads named the Cromulons appear in the sky demanding Earth “show me what you got,” Rick and Morty travel to the Pentagon to assist. They have to team up with Ice-T to produce a hit single that will win the Cromulon game show that Earth has been unwittingly selected to participate in. The pressure is palpable since an earthquake hit the Grammy Awards, killing all of Earth’s most prominent musicians. Rick, Morty, and Ice-T are Earth’s only possible contenders for the song competition. And the stakes are high, with the world’s fate resting on their shoulders.

They’re not exactly a dream team, but they must make it work to save the world despite Rick’s flippant attitude towards the situation, Ice-T’s apathy, and Morty’s lack of faith in Rick.

In this episode, Morty’s desk-wetting and Summer’s pottery enamel huffing has prompted the Smith family to be saddled with school-advised family therapy. To Morty’s bewilderment, he finds Rick has turned himself into a pickle to get out of the therapy session. The family leaves to teach Rick a lesson before he is propelled into the sewers after an unexpected storm. During his journey, he must create an exo-suit out of the body parts of various vermin he comes across, battle rabid rodents, and engage in a fight and helicopter escape scene which suspiciously resembles Die Hard. Simultaneously, Morty, Summer, and Beth are cross-examined by the perceptive Dr. Wong, who suggests that the family’s problems originate with Rick. Who would’ve guessed?

The episode perfectly sums up the family dynamic: Summer and Morty engaging behaviors typical of troubled juveniles, Rick’s blatant disregard of the responsibility he has to his family, Beth’s denial of her father’s indifference, and even Jerry’s nonattendance that is stereotypical of an absentee parent.