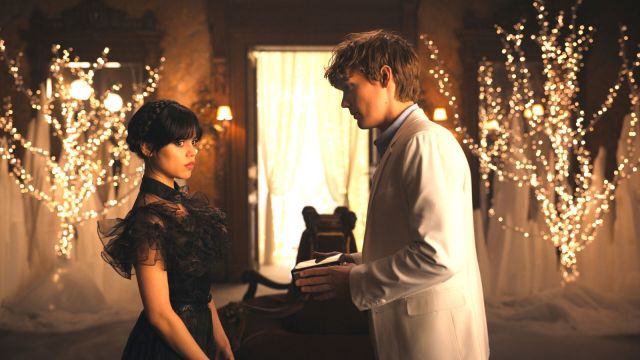 Wednesday‘s release has seen the Addams Family return to the mainstream, with it rebranding itself as a Riverdale-esque murder mystery. Breakout star Hunter Doohan has revealed how he managed to keep the grueling secret to himself.

The Netflix series, executive produced by Tim Burton, definitely nailed its overall tone and mystery, with it seeing Jenna Ortega give perhaps a definitive portrayal of Wednesday Addams. But she isn’t the only one to shine, with co-star Doohan giving an excellent “nice guy” performance in the series as Tyler.

What makes it stick so exceptionally well is, of course, Wednesday’s massive twist in episode seven. He isn’t just a slightly dorky cute guy, he’s actually a Dr. Jekyll/Mr. Hyde-style killer. Literally named Hyde in his monstrous alter ego, just to make sure you get the point. Doohan spoke to Entertainment Weekly about keeping secrets and how soon he knew of his character’s true intentions.

“I found out toward the end of the audition process, right before my final chemistry read and network test with Tim [Burton] and everyone. They told me Tyler had a dark secret, and I asked them if it was the secret. They wouldn’t reveal that but I had enough of a clue to at least try to show some colors of that in the final audition.

“And then after I was cast, [creators] Al [Gough] and Miles [Millar] had like an hour and a half phone call with me where they ran through everything and told me the whole story.”

Doohan was also adamant about making sure the twist wasn’t foreshadowed too obviously, or given too much of an early sinister light. He recalls wanting the bathtub scene removed because he felt it was too suspicious for him to not end up being the monster.

“Yeah, I remember it’s such a cool moment but I remember asking them to even take out the bathtub scene because I thought that was too suspicious. I was like, ‘I don’t want anyone to know!’ Because I personally hate spoilers, but it’s fun to talk about it now. I’ve done so many interviews where I just lied my ass off and all I could say was, ‘I’m a barista.'”

Tyler is last seen being rescued by paramedics in the season finale, with him almost certain to return for a second season should it be renewed.