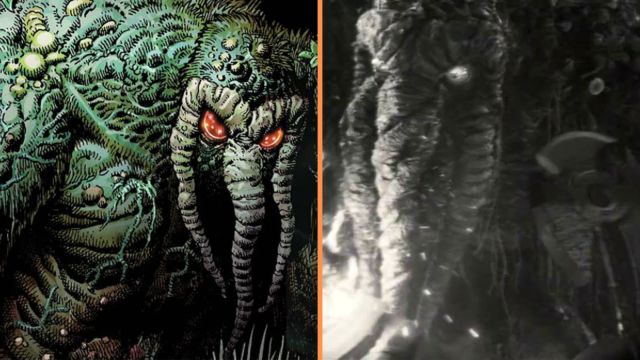 One of the most highly anticipated character introductions in Marvel’s Werewolf by Night was not all CGI, but instead a series of practical effects.

Werewolf by Night howled into an Austin, Texas theater for an early preview and Q&A session with director Michael Giacchino, and he’s revealed some fascinating tidbits about its production. Perhaps most interesting of them all was how they managed to bring the cult classic character Man-Thing into life.

Despite an expectation of nearly everything being done with CGI nowadays, especially large hulking monsters, Giacchino reveals as much of it was done using practical methods as possible. We Got This Covered’s Tricia Gilbride was in attendance. Giacchino was pushing for practicality throughout production and made it a core part of the special.

“We tried to do as much practical as we could on this film. Every set was built, there were some, very few extensions (with CGI) which had to be done here and there. I was always pushing for as much practical as possible. When we couldn’t do it, the visual effects designer was there with us.”

As for Man-Thing, he wasn’t just a stick with a few tennis balls, but instead a mixture of animatronics, man in a suit a la old school Godzilla, and touched up with digital effects.

“We had a physical representation of Man-Thing on set. It was a beautifully sculpted animatronic which could move its eyebrows, its head, its neck, all those things. That was there mainly for reference. Importantly, it was there for the actors to look at. I didn’t want somebody with a stick and a tennis ball going ‘hey look at this’. We also had a giant suit that was worn by Carey Jones (special makeup effects supervisor).”

Despite all of this, Giacchino says nearly all the shots were still digitally augmented with a handful left of just the animatronic or the suit was worn by Jones. The amount of practical work comes as a particular surprise given how often stills from behind the scenes of Marvel projects are just green screen.

Man-Thing’s introduction to the Marvel Cinematic Universe will be available soon, as Werewolf by Night begins streaming Oct. 7 on Disney Plus.