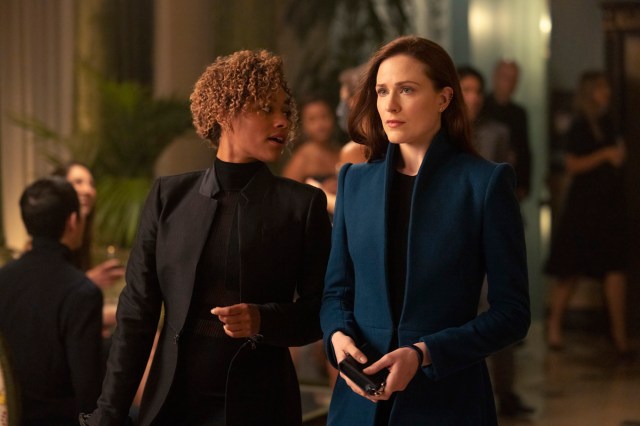 The brain-numbing allegorical references in Westworld have never been subtle or far and few between, but last night’s season four opener certainly had a mind to push the limits of that creative tendency to the very precipice of its breaking point.

I mean, what better way is there to follow up that explosive and confusing ending to season three than by seemingly retconning everything and introducing a new reality to our main protagonist?

Because that’s precisely what has happened to Dolores. When viewers reunite with the character in “The Auguries” again, she goes by the name of Christina, not remembering a single thing from her past as a Westworldian robot hell-bent on world domination. Not only that, it seems that Dolores has taken up Lee Sizemore’s job of coming up with storylines for AI characters. Though unlike Westworld, these characters happen to be NPCs for a video game company.

Addressing the meta implications of this new narrative pathway in an interview with Entertainment Weekly, here’s what co-producer Lisa Joy had to say on the matter.

“It’s all become very meta now for me because this show has always dealt with a lot of issues through metaphor and a lot of feelings and emotions. Now, though, it’s getting really close to home because here we have this lady, this writer in the big city looking for love, trying to get by with a roommate. I just felt like I was, I was writing my 20s. Now that finally our timeline is so much more contemporary, it’s really great to explore everything about that culture, and in that way also create a character that’s very relatable to me and a way to reflect upon the act of being a writer itself.

“Being on TV, on staff, you get notes, you feel insecure, you have to deal with criticism and you wonder, “Oh my God, am I ever gonna make it? Am I an idiot?” This show has always been about storytellers too, from Dr. Ford early on to the notion of the park itself as a grand form of a story that the Man in Black was looking for an answer to. Dolores — dearly departed Dolores — used to want to be the author of her own story, and now we find this new character, Christina, who very much is an author of the stories.”

In a way, Dolores is coming full circle with the new nature of her reality, even if she once again finds it difficult to question that nature as she did in the first season. If Joy’s words are anything to go by, however, Dolores is truly no more, and we have only Christina to follow from here on out.