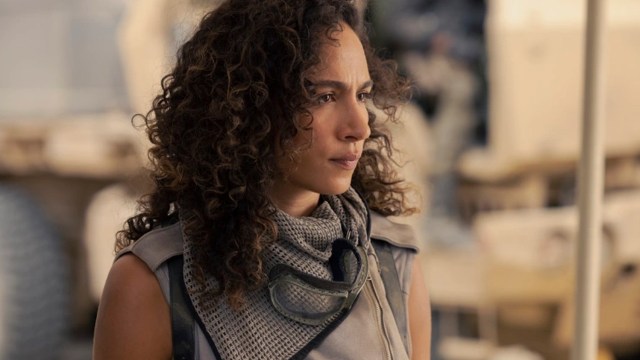 Westworld season four has only gone from strength to strength as each episode of its run has arrived and today’s latest addition might be the biggest yet.

Episode four had plenty of big implications for the characters in the series but one reveals that may have shocked fans the most came in relation to Aurora Perrineau’s character C. This is your last chance… huge spoilers are ahead.

In this episode, we find out that C is in fact the daughter of Caleb who in this current timeline has become a host at the mercy of Charlotte.

Speaking to the Hollywood Reporter, Perrineau shared just how much C knows about the fate of her father and what she knew about her character before filming this bombshell reveal.

“I didn’t know anything. I got the scripts prior to each episode — you get it right before the episode and then you shoot it. So it was always a surprise. My first episode, I was like, ‘Oh, I get to work with Jeffrey Wright and Luke Hemsworth. That’s so fucking cool.’ It turned into like, ‘OK, cool, I don’t know who this girl is, but that’s fun.’ Then I got the script for four while we were shooting already and that was a big surprise. I had no idea. I called one of the producers and I was like, ‘Wait a minute, am I Aaron’s daughter?’”

I don’t think she knows anything. It’s kind of what she said to [Bernard]: nobody believes that there’s a thing out here and I don’t even know if I believe that there’s a weapon out there. I just know that I think my father is there and that’s my main goal. She didn’t know. She had heard these rumors, and they’d all heard these rumors. It’s like an urban legend of this thing that happened in this place. So I think for her, she was just going there to see if her dad was there.”

Another big reveal that came from this episode was the fact that the woman the resistance has been searching for — that Bernard has taken them to is simply the robot corpse of Maeve. Speaking about this reveal, the actress explained that C is still confused as to how the weapon is a woman and what that means.

As for the timeline in Westworld season four, Perrineau played coy with the details sharing that she is kept in the dark on these specifics so that nothing is spoiled.

Fans will need to wait until next week for more insight into what these revelations mean for the story. Westworld still has four episodes left landing on HBO weekly each Sunday night.