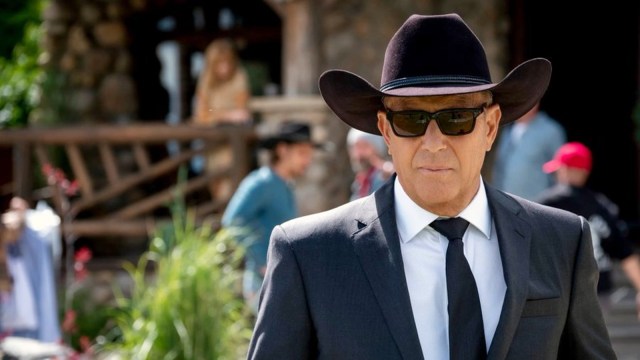 Kevin Costner‘s John Dutton has been named governor of Montana in Yellowstone season five, and although he did it for personal reasons, he just put an even bigger target on his back.

Season four ended with John’s gubernatorial status in question, but the record-breaking season five premiere was quick to confirm that he actually holds the position. In his speech, he states that he’s the opposite of progress, he’s the wall it bashes against and he won’t be the one that breaks. This belief of his will be put to the test because his new position comes with a whole new batch of challenges.

His reason for becoming governor was entirely to save his ranch. The powerful private fund Market Equities, and its CEO Caroline Warner (Jackie Weaver), had plans to buy out Yellowstone landowners, and with John Dutton owning the sprawling Dutton Ranch, she turned her attention to his land. Beth (Kelly Reilly) takes a job offer at Market Equities with a controlling interest, and she uses it to damage the company. The feud between both sides has become more personal and John had to take the position of governor to have the power to protect his land.

Season five begins with John’s deadpanned look in the mirror after being named governor. Beth comes in, and the proud daughter looks at her father and begins crying, in response to which John says he feels the same way. Beth’s tears were of happiness, though, and he replies that’s not what he’s feeling. When John gets sworn in, he announces his first order of business is to cancel the funding for the Paradise Valley Airport project and the surrounding commercial and housing developments to maintain the land and the rivers. Next, he says he will propose to double property taxes for non-residences, a 6% sales tax to all goods sold to non-residents, and vehicle registration fees to all non-residents. The crowd that attended John’s speech applauded him, but other parties don’t share the same sentiments.

Jamie (Wes Bentley), John’s adoptive son who’s always sabotaging his family’s efforts, isn’t happy with this news. He claims that John just sent them back 30 years and he’s not even sure if this is legal. Beth responds to him that if it isn’t legal, his job is to make it legal. He’s meant to push all of this through and she will put pressure on him to make sure he holds to it.

Jamie tells his father later in the car that he should rethink canceling the airport funding. It would give them five million a year to the ranch and the ranch is losing three million each year, but Beth pushes back and says they have other revenue streams. John Dutton says the ranch comes first and he isn’t budging.

Bentley spoke about Jamie’s feelings after his father’s victory in the Behind the Story for “One Hundred Years is Nothing,” and said, “It’s confusing and dispiriting and demoralizing for Jamie to sit here and watch John live the dream he’s had.” He just might be the weak link Market Equities will use to exploit the Dutton Ranch.

Market Equities watched the news reporting John Dutton was elected as governor and noticed that Jamie didn’t seem all that enthused on stage. It should be the happiest day in his life, but it’s not. Caroline calls in Sarah Atwood (Dawn Olivieri), a corporate power player to go after the family and the Dutton Ranch. She’s a fiery businesswoman who knows what she’s doing and we’re expecting a head-to-head against Beth in the future.

Sarah arrives in Yellowstone season five, episode two, “The Sting of Wisdom,” and watches John’s press conference detailing how detrimental building a city in the middle of the pristine wilderness would be, and will strip the area of its many resources. He signs an executive order to cease all state funding for the development projects, revoking all state permits. Caroline plans to present a cease and desist before the judge and to file suit against the state for breach of contract. Sarah also notices Jamie’s lack of enthusiasm, and chooses to “start with him.” She’s expecting a big payday from this and she’s excited to get her hands dirty.

Chief Thomas Rainwater (Gil Birmingham) knew that John would kill the hotel and the airport, which is good for the land, but he doesn’t see how it’s good for the Native community. “Not yet anyway,” he says, implying that he could somehow use John’s position in their favor. As of now, Rainwater isn’t sure of what to do. Birmingham said that there’s always been a split in Native communities between traditionalists and people who believe they should be more aggressive, and that internal conflict is what’s driving his character.

Representing the latter side of the debate is Angela Blue Thunder (Q’orianka Kilcher), who whispers in Rainwater’s ear during the governor’s swearing-in ceremony that he had a chance to be rid of John Dutton, but he chose not to. He could’ve just made an enemy of Blue Thunder, who could potentially take him down herself, or push him to act more aggressively.

The Dutton Ranch throws a party for Governor John Dutton. There’s music and dancing, and the Bunkhouse Boys are having a blast, but Rip (Cole Hauser) has secluded himself away from the festivities. He’s laying in the grass by himself overlooking it all when Beth comes up to him and asks him to join her. He refuses and states that this party isn’t for him. Rip goes on to say that he never thinks about the future because he’s worried about the present, but when he looks down at the ranch, he feels worried.

Rip references an emperor who played the fiddle when Rome was burnt, and Beth answers that he’s thinking of Nero. Nero was blamed for ignoring Rome’s people and because of his irresponsibility, everyone suffered. Rip then says that John’s going to lose this place and Beth doesn’t like this at all.

What John Dutton must do

All is not yet lost, however, depending on how John chooses to lead. If he remains self-serving, then it’s likely this fate will befall him. As Senator Lynelle Perry (Wendy Moniz) tells him, he has to play the game if he wants to win because he has enemies on all sides and if his heart isn’t in this, he’ll be all the easier to take down. He’s in a position of even greater power now. Jamie is the attorney general, Kayce (Luke Grimes) is livestock commissioner, and Beth is his new Chief of Staff. If he wants to win this war, he’s going to have to fight for the people.