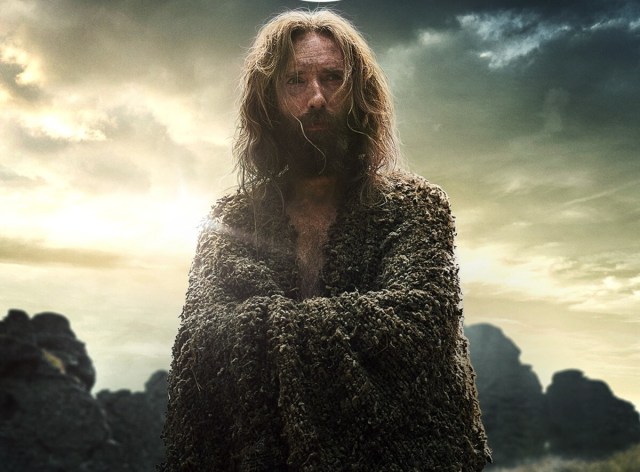 Elanor “Nori” Brandyfoot (Markella Kavenagh) discovered the mysterious stranger, who fell from the sky and crashed near the harfoot encampment in the first episode. The pint-sized harfoot quickly befriended the strange man, despite his enormous size and her village’s fear of strangers.

Although The Stranger had no memories of who he is or from where he came, he possessed magical abilities that were perceived by the harfoots as destructive. Nori believed him to be good, however, and invited him along as the wandering hobbit-like creatures set off for their next encampment.

The three mysterious witch-like beings in white cloaks discovered the sight where The Stranger crashed to Earth and followed the travelers on their journey. Meanwhile, after trying to revive a tree that was burnt during Mount Doom’s explosion, a branch nearly fell on one of the harfoot children. Banished from the camp, The Stranger set off on his own. Unbeknownst to him, the white-cloaked individuals arrived looking for him and attacked the harfoot encampment.

The finale kicks off with the mysterious, white-cloaked figures catching up with The Stranger. Scared and baffled, he stares in confusion at them as they suddenly bow.

“We come to serve you, Lord Sauron,” the Ascetic (Kali Kopae) says.

Meanwhile, after they attack the harfoot’s base camp and set off in search of The Stranger, Nori and a few of the harfoots decide to try to help him. The little gang of harfoots attack the Mystics, while Nori tries to save her friend, who she believes in her heart of hearts is a good person, handing him the staff that Ascetic carries and begging him to help them.

As the Dweller (Bridie Sisson) prepares to kill the harfoots with fireballs, and it seems all hope is lost, he stands, extinguishing the flames, and banishes the Mystics back where they came from. Realizing their mistake, the Mystics are stunned.

“He is not Sauron,” the Nomad (Edith Poor) says.

“He is the other…the Istar,” the Ascetic continues. “He is…”

“I am good,” The Stranger proclaims as he banishes the Mystics back to the shadows.

As he blasts them with the staff, their bodies turn into thousands of moths before flying away. When the dust settles, Nori asks him what the Mystics meant when they called him the Istar. “In your tongue that means ‘wise one’ or ‘wizard,’” he replies. Yes, it is now confirmed that The Stranger is one of the five wizards sent down to protect innocent people. The five are Saruman the White, Gandalf the Grey, Radagast the Brown, and two unnamed blue wizards.

Which one is he?

It would be great to finally meet the blue wizards, but based on all the clues the show has provided up to this point, it’s probably safe to assume he is the one and the only Gandalf the Grey. He’s approximately the correct height, he’s friends with nature, he’s friends with the forebearers of hobbits, and he chooses his words ever so wisely.

“Be times our paths are laid before us by powers greater than our own. In those moments, it’s our task to make our feet go where our hearts wish not to tread. No matter the perils awaiting us on the way,” he tells Nori, who decides to leave her home and go on an adventure with her friend.

Nori tells him she has no idea which way to go. Smelling the air, he points out across the plains and says it’s that way. The little harfoot is confused.

Let us know the comments if you think The Stranger is Gandalf the Grey or some other wizard.