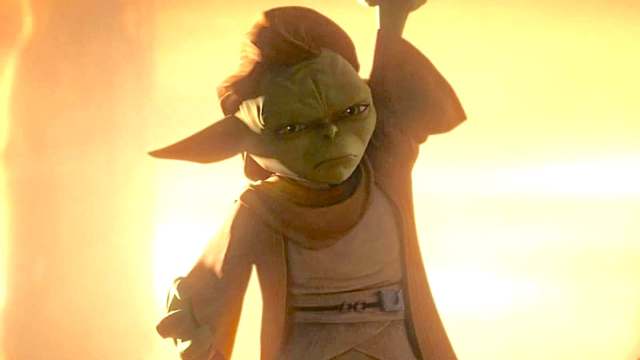 Star Wars: Tales of the Jedi follows some of the greatest characters in all of Star Wars, featuring Count Dooku, Ahsoka Tano, Qui-Gon Jinn, Obi-Wan Kenobi, Mace Windu, Sheev Palpatine, Bail Organa, and Anakin Skywalker. Yet it is one Jedi’s appearance that was the talk of social media when the series of six animated shorts dropped on Disney Plus, and that was Jedi Master Yaddle.

Jedi Master Yaddle is one of the only other characters in the Star Wars franchise that is of the same race as Master Yoda, with the other being the child Grogu from The Mandalorian. Up until now, Yaddle’s backstory had been shrouded in mystery, appearing in Star Wars: Episode I – The Phantom Menace, a handful of comic books, and not much else. Let’s take a look at her appearance in Tales of the Jedi, and examine why she is not in more of Star Wars.

What happens to Yaddle in Star Wars: Tales of the Jedi?

Yaddle appears in the fourth episode of Tales of the Jedi titled “The Sith Lord” and she is voiced by Bryce Dallas Howard. This episode was the last Dooku episode in the series, with all of his episodes showing his discontent and disillusionment with the Jedi Order. Yaddle was with Count Dooku when he questioned his former Padawan now Master Jedi Qui-Gon Jinn after he reported to the Jedi High Council that he had encountered a Sith Lord, Darth Maul, on Tatooine. Dooku himself had been warning the High Council that he could sense a dark presence for some time, only for them to look the other way, rejecting his claims.

After Qui-Gon Jinn was killed by Darth Maul on Naboo, Yaddle saw Dooku at the Jedi Temple and attempted to comfort him after the death of his former Padawan. However once Dooku told her that he was not going to Jinn’s funeral, she grew concerned and followed him to his meeting with Sheev Palpatine. Once she discovered that he was conversing with a Sith Lord and had turned to work with the man responsible for Jinn’s death, Yaddle urged Dooku to fight with her and bring Palpatine to justice.

But it was too late for the former Jedi Master, as losing Qui-Gon Jinn was the last straw, and he defeated her in a lightsaber battle. In a true ‘do it’ moment, Palpatine watched Dooku murder Yaddle with his lightsaber, cementing Dooku’s role in the Clone Wars to come. So, that is why Yaddle was not in Star Wars: Episode II – Attack of the Clones, as by that time she was already dead.

Not a franchise to keep their dead out of the spotlight for long, it is likely that we will see Yaddle again. She might even play a major role in any upcoming projects regarding the High Republic era of Star Wars as she was a Jedi in that period. But we will have to wait and see what the galaxy far, far away has in store for the Jedi Master. Star Wars: Tales of the Jedi is available to stream on Disney Plus.