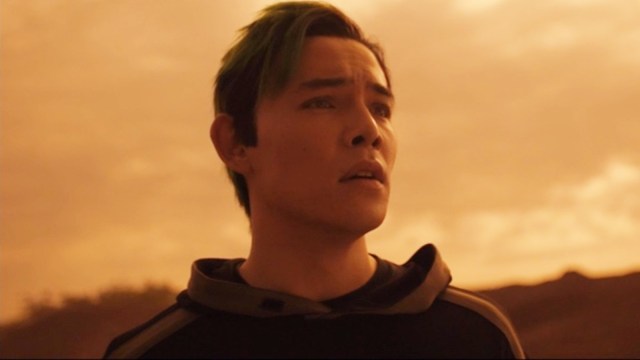 Image via HBO Max
Review of:

There’s a dark prophecy looming in Titans season four, and somehow the team is connected to it.

In season four, the Titans are working in Superman’s city of Metropolis and investigating a dark mystery. There have been supernatural deaths happening and some people — including Raven (Teagan Croft) — have been experiencing disturbing visions involving blood. A witch by the name of Mother Mayhem (Franka Potente) has been killing people, manipulating events, and leading the Cult of Blood for some darker purpose, and the Titans might hold the key to stopping the apocalyptic danger that’s on the way.

Hints of the prophecy

It all starts in Titans season four, episode one, “Lex Luthor,” when the Titans visit S.T.A.R. Labs for some training. Kori Anders/Starfire uses an energy blast on a piece of promethium, the strongest material on earth, and she breaks it. This was apparently only eight percent of her power, foreshadowing a power upgrade in the future.

Gar Logan/Beast Boy’s tests don’t go quite as smoothly. He tries on new tech that should allow his clothing to adjust to his animal transformation, but when he uses it, his mind goes into a world with a red sky and an ominous tree with skulls on it. When he returns to reality, the lab room is destroyed. He turned into multiple animals and went completely berserk, which isn’t at all a good sign.

In episode three, “Jinx,” we get some more background on what’s happening with these two. Dick Grayson/Nightwing (Brenton Thwaites) and Starfire, who’ve been acting like the Titans’ parents this season, go on a mission to release the sorceress Jinx out of prison after Mother Mayhem’s attack put Raven out of commission. When Starfire grabs a box and opens it, she sees a magical heart that turns her to stone. Similar to Beast Boy, she goes to another place in her mind.

Starfire arrives at Elko’s Diner under a red sky (remember that from Beast Boy’s mind adventure?) and inside she finds fellow Tamaranean Zadira, who tells the Titan that she’s not dead and that she alone can save them. Starfire doesn’t understand what’s going on and doesn’t want to hear it at first. She’s been pulled by prophecies before and she wants to chart her own path this time around.

Starfire eventually caves out of curiosity and puts Tamaranean birth year into the jukebox and a song from her homeworld of Tamaran. It’s one that was used to inspire her training and she says the lyrics, “When the red moon fills the sky, my true fight begins.” Zadira confirms that it was about her destiny and now her destiny has arrived. Starfire is to become the warrior she was destined to become.

Elko Diner was an important location in Titans season two. It was where the Titans came back together to defeat Deathstroke after dark secrets divided the team. Starfire, Raven, Donna Troy (Conor Leslie), and Dove (Minka Kelly) had all received signs during that time about the diner, so clearly it holds some powerful significance to their journeys.

Beast Boy is with Raven whose hair has turned blonde after she lost her powers in the battle with Mother Mayhem. They’re in the Titans RV and she’s feeling free without her Soul-Self within her. It’s the source of her mystical powers and not having it means she no longer feels everyone else’s emotions rushing through her. Then Beast Boy hears voices, goes into a trance, and leaves the RV to follow the sound.

Raven follows behind and he tells her that he wants to take control of his life, but ever since they got to Metropolis, he’s been having flashes of a world surrounded by red. He admits to hearing the voices and says that they’ve been calling him “skinwalker,” and they kept saying, “Join us.” He doesn’t know what they mean, but in Navajo culture, skinwalkers are shapeshifters that can turn into animals and it could be a connection to his animal side. He thinks they’re trying to tell him something about Mother Mayhem.

Beast Boy and Raven continue their journey and come to the place in his vision from earlier. They walk up to the twisted tree with dangling bones and Beast Boy says that they’re trophies, slaughtered by some dark force. He closes his eyes listens closely and repeats, “When the blood moon is full, the world will follow you.”

What the blood moon prophecy means

All of this is pointing to Mother Mayhem and her ultimate plan. So far, she’s stolen Raven’s powers and she’s sabotaged Sebastian Sanger/Brother Blood’s (Joseph Morgan) life in an attempt to pull him over to her side. With red being the central color and Mother Mayhem using the Temple of Azarath (Azarath being Raven’s homeworld) it’s possible that this could be about bringing Raven’s interdimensional demon father Trigon to Earth to take it over.

After Mother Mayhem sets up Sebastian for murder, she visits him while he’s being detained at the Metropolis Police Station. She reveals that she’s known him since before he was born and knows what’s in his heart. She compliments the interactive video game he’s been trying to sell and says that he’s right about how he’s going to change the world. She needs Sebastian for the next part of the ritual to bring about her plan and she’s using his grand dreams to bring it about.

Mother Mayhem has him repeat the words, “Azarath, Metrion, Zinthos,” which is Raven’s famous incantation from the Teen Titans animated series, but Superboy crashes in and pulls him away before he finishes. It could be that Mother Mayhem is needing Brother Blood to lead the Church of Blood himself. His transformation could lead to the apocalyptic world Starfire and Beast Boy have been seeing.

The Titans have averted Mother Mayhem’s plans for now, but she’s still active and devoted to fulfilling this ominous prophecy. When the blood moon is full, the heroes will have to step up and fulfill prophecies of their own.