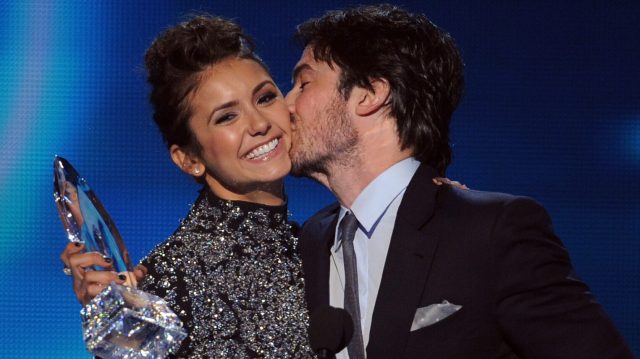 Most fans of pop culture have been introduced to love triangles of grand proportions — like McDreamy, Meredith, and Addison in Grey’s Anatomy, Brooke, Lucas, and Peyton in One Tree Hill, Blair, Nate, and Serena in Gossip Girl, and Jake, Olivia, and Fitz in Scandal. Viewers aren’t strangers to the idea, but few have had the multi-layered storytelling that took place between Elena, Stefan, and Damon.

Both Damon and Stefan knew Elena for several lifetimes, or so it seemed; in their initial love affair with Katherine Pierce, both brothers saw Elena and were sure their lost love had returned. Upon meeting her, it was clear that she was someone else entirely, but their attraction didn’t dissipate — it magnified.

As dedicated fans of The Vampire Diaries know, defining when Damon and Elena first got together isn’t an easy task. While fans drew a line between being on Team Stefan or Team Damon, Elena did have a draw to both brothers. Damon and Stefan each brought out a very different side of her, and she wanted to embrace both.

“It’s okay to love them both; I did,” Katherine told Elena during season 2 — and it’s an idea she carried with her throughout the series. Ultimately, Elena ended up with Damon, and while some of us have strong feelings about that, it was a beautiful love story to witness.

Elena’s draw to Damon began long before they officially chose one another, and their first kiss was another story entirely. So to correctly answer this question, we’ve got to look back at how their relationship evolved across every season of The Vampire Diaries.

Season 1 (and their first big trip)

Damon entered The Vampire Diaries as the ultimate bad guy; he was vengeful, hateful, and seemed to revel in causing pain. Damon hid behind a facade he built for himself, and was an easy guy to dislike. He used Elena’s friends to get close to her, went out of his way to make his brother’s life miserable, and almost gave away their big secret because he simply didn’t care.

Or so it seemed, Damon did care underneath it all, and as the series progressed, viewers began to understand him a little bit better. As fans started to uncover a new side of Damon, Elena did too.

The pair took a trip together to help Elena deal with everything unfolding in front of her, and they began forming a close bond. It was a critical step in their future; it laid the groundwork for the couple they would eventually become.

The pair also had an epic dance moment in season 1, when Stefan was so blood-thirsty that he couldn’t share the spotlight with his date. Damon saw his absence and moved in to save the day, and even if you are still on team Stefan (we get it), you can’t deny the beauty and the chemistry they shared at that moment. Where Elena ebbed, Damon flowed, and it is a stand-out moment — not just within The Vampire Diaries, but in the entirety of pop culture.

Damon, however, was still up to his antics — and Elena would soon continue her relationship with Stefan. Stefan was a safe place for Elena; he brought her a sense of comfort and compassion that was unmatched.

Season 2 (and the sort-of first kiss)

Damon and Elena had their first kiss in season 2, so it’s clearly a critical moment for their future — but it wasn’t the epic first kiss that some fans were anticipating. This kiss was during a pivotal moment for Damon; he thought he was dying (the forever kind of dying), and he confessed his love for Elena. Telling her that he knew it would always be Stefan for her, he still wanted Elena to know how much he loved her.

After telling him she knew, she planted a sweet peck on his lips.

While season 2 focused heavily on Stefan and Elena, that kiss would become a significant part of her story.

The porch is a special place for Damon and Elena, and there are a few moments in season 3 where they genuinely thrive. One is when the two share a special kiss after Damon says he’s tired of feeling guilty for wanting Elena. Instead of just wanting her, he decides to make a move — may as well give himself something to feel guilty about, right?

Their chemistry is off the charts, and even though we’re Team Stefan, we can’t deny the bond they’ve formed throughout the seasons. A lot of season 3 sees Damon and Elena trying to get back to Stefan, and even Damon helping the two get back together, but with Stefan acting very much unlike the guy she fell in love with, she draws even closer to Damon.

The two share more than one kiss through season 3, and their feelings grow stronger with each moment they share. Season 3 was a definite turning point for the pair, but they were still just friends at this point — even if they both wanted more. Elena still loved Stefan; was it really okay to love them both? She chose to be with Stefan, and a moment later, her life changed.

Elena became a vampire in season 4, and as with any vampire romance, it heightened everything, including her feelings for Damon. She left Stefan to be with Damon, and they were on fire; however, Damon began to doubt Elena’s feelings for him. Why the sudden change? Viewers discover that Elena is sired to Damon, and he wants her love for him to be pure, and of her own discretion.

It’s something that eats away at Damon for a long time, but Elena’s feelings don’t change. She loves Damon, she has always felt something for him, and it almost seemed that back in season 2, when Katherine told her it was okay to love them both, she let that guard down and did just that. She loved Damon too.

Later in season 4, Elena does confess her love to Damon, even after the sire bond is broken. The two share an intimate kiss in front of a fireplace, and it’s the epic moment Delena fans had always hoped for, the moment she made her final choice. Elena picked Damon; they were endgame.

Season 5 and beyond (it’s a forever kind of thing)

While the two have ups and downs, they remain a strong couple in season 5. They attempt to leave one another, citing silly reasons that never actually keep them apart, before running back home. They’re in love, they’re bonded, and they’re living their dream. Of course, things don’t stay happily ever after for long, and season 6 brings Damon’s “death” (he’s actually trapped in another realm) which breaks Elena. She wants to be rid of all memories of him, asking for her love for Damon to be erased, but as the series progresses, we see that she can’t escape him.

The two reunite in season 6, and she’s forgotten all of their beautiful times together, remembering only Damon’s shortcomings, but it doesn’t take long for the two to fall head over heels in love again. Their love is so powerful that it even survives Elena’s comatose state as she’s tethered to Bonnie.

Of course, that undying love didn’t mean it was easy for Damon to exist without Elena. In fact, he made some choices that left fans shaking their heads, and he was in a state of turmoil without her. Aside from Stefan, Elena was the one person who knew him in all of his forms — the one who gave him hope for tomorrow. Without the light in his life, he didn’t strive to stay away from the darkness.

While Elena is only present for one episode of the final season, it’s an impactful one. She appears in the series finale of The Vampire Diaries, and her reunion with Damon is next level. He was meant to forget their memories, but his heart kept her close. Damon loved Elena despite anything in the world that worked against them — natural or supernatural.

The final episode also sees the couple making an important decision — to become human again. They want to live out the rest of their natural lives together, enjoying the world as a family and having a family — eventually growing old together. Growing old doesn’t happen for vampires; they remain the age they were when they were turned. The cure helped them get another chance at life.

A flash-forward shows Damon and Elena, surrounded by loved ones, married in their human forms. The ring on Elena’s hand proves that the two took the steps they’d always dreamed of. It was a proper ending to a long-running series, and while Team Stefan always hoped it would be him at the end, Damon and Elena made sense. Their happily ever after came true.

The Vampire Diaries is available for streaming on Netflix if you wish to watch an epic love story from the beginning again.