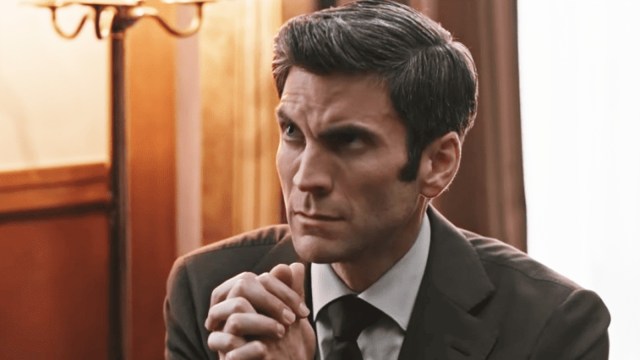 Image via Paramount Plus
Review of:

Wes Bentley has been in some great movies and TV shows over the span of his career. While many know him from Paramount’s popular western Yellowstone, that series really only scratches the surface.

Bentley was born on Sept. 4, 1978, in Jonesboro, Arkansas. He was raised in Little Rock, and he’s the third of four sons. He lived in a religious household; his father was a minister, and his mother was an ordained elder in the Arkansas Conference, both of whom were in the United Methodist denomination. Bentley reached success early in his career with the cerebral film, American Beauty. The movie took home the Oscar for Best Picture, but afterward, he struggled with substance abuse. He had to work to rebuild his career and returned to acting in the off-Broadway production of Venus in Fur and has continued to land a string of other projects.

Check out Wes Bentley’s greatest movies and TV shows below.

Gone stars Amanda Seyfried as Jill Parrish, a woman trying to put the pieces of her life back together after an attempted kidnapping. Things take a turn for the worst in the movie when her sister disappears, and she believes that the man who tried to get her has taken her sister. Bentley plays Peter Hood, the department’s new homicide detective. While other police officers doubt Jill’s story, Peter gives her hope when she needs it most. He could’ve been utilized more effectively, which is why this role isn’t higher on the list, but he’s still a comforting presence in the story.

There Be Dragons is a historical war drama movie set during the Spanish Civil War in the 1930s and stars Daredevil actor Charlie Cox. He plays Josemaria, and Bentley plays Manolo, two childhood friends who are separated due to forces beyond their control. Josemaria suffers greatly in his youth and becomes a priest, while Manolo, whose cruel parents kept him away from his friend, becomes a spy for the opposing right-wing forces. The script has its issues, but Cox and Bentley both did admirable jobs.

Blade Runner: Black Lotus took a different take to the Blade Runner franchise. It’s an anime series with a replicant heroine with amnesia and a score to settle against those who wronged her and others. Bentley is voice of Niander Wallace, Jr., and his delivery is perfect. The CEO of Wallace Corporation is highly sophisticated and intelligent, yet his cruelty knows no bounds. The series shows Niander’s climb to the top, and audiences are given more insight into his psyche. Similar to Jamie Dutton, Niander has father issues and plans to destroy him. Niander is a complicated character, but Bentley plays him with ease.

Paranormal events happen in the Hotel Cortez in California. American Horror Story: Hotel is filled with oddball characters coming in and out of the building, and Wesley’s homicide detective John Lowe is on the case to figure out what’s really happening. The Countess, played by Lady Gaga, owns the hotel, and she does all that she can to save her children from Romona Royale, played by Black Panther: Wakanda Forever‘s Angela Bassett. With a growing number of dead bodies pointing Lowe towards the Cortez Hotel, he’s not far behind either.

Ghost Rider might not make it to the top of the best superhero movies list, but it’s a fun ride. Staring motorcycle stuntman John Blaze, played by the one and only Nicolas Cage, he sells his soul to the devil and becomes a demon on wheels. He rides his fiery bike with his Hellfire Chain to dish out brutal vengeance. Blackheart was the son of Mephisto with a myriad of supernatural abilities. Bentley played the main villian who sought to destroy the Earth by spreading Hell all over it, but first he had to try to kill Johnny Blaze. When Blackheart takes on his demon from with dark blue skin, horns on his head, evil red eyes, and sharp teeth, he’s truly a fearsome sight to behold.

Ryan Murphy’s American Horror Story: Freak Show is one of its best seasons in the franchise, and Bentley is a major part of that. He plays Edward Mordrake, a strange man with two faces who’s out for revenge. In a very “Dorian Gray” way, Mordrake had a duality to him. His first face was that of a handsome nobleman, but his second face on the back of his head was vile and mischievous. The second face would whisper twisted ideas to Edward that only he could hear, and it drove him to madness. Bentley was magnificent as both faces and proved that he could bring the horror as well.

Interstellar is one of the best sci-fi movies ever made, and the cast is unbeatable. Earth is becoming uninhabitable because of global crop blight and a second Dust Bowl, and a former NASA pilot with a team of researchers must venture across the galaxy to find a hospitable planet. Bentley plays Doyle, a geographer and astronaut on the team. Doyle argues with Cooper and he freezes up during a crucial moment, but he cared about this mission, even if he wasn’t fully prepared for it.

The Hunger Games was a blockbuster sensation of post-apocalyptic proportions. Jennifer Lawrence played the District 12 archer who stepped up in her sister’s place to compete in the deadly tournament. Bentley played Seneca Crane, the Head Gamemaker of the 74th Hunger Games, with a mind for violent creations. There was more to him than just cruelty, however, he would not permit Katniss and Peeta Mellark (Josh Hutcherson) to take the berries that would end their lives, thus allowing them to control their own fates. It was a decision he would pay for with his life. For as bright as Crane was, he underestimated just how crafty Katniss was.

Jamie Dutton might be the black sheep of the family, but the show just wouldn’t be the same without him. As the son of Kevin Costner’s John Dutton, owner of the sprawling Dutton Ranch, Jamie has quite the burden on his shoulder. He’s an attorney with his sights set on holding office. He has devoted himself to his family, but because of his drastic actions, he’s fractured that relationship, especially in regards to his sister Beth, played by Kelly Reilly. He’s a flawed character who can’t seem to get out of his own way, yet we desperately hope he’ll finally get his act together and become the man he wants to be.

American Beauty put Wes Bentley on the map. The film was a snapshot of the American middle class that explored love in its many forms, sexuality, freedom, and materialism among others. Bentley’s Ricky Fitts was devoted to videotaping things he found beautiful and cared more about his art than being popular. When he saw Jane Burham (Thora Birch), he fixated on her. After an initially rocky start, they started seeing each other as the story explored their personal lives. Ricky was a complex artist, and you’ll spend the whole movie trying to figure out how that unusual mind of his works.