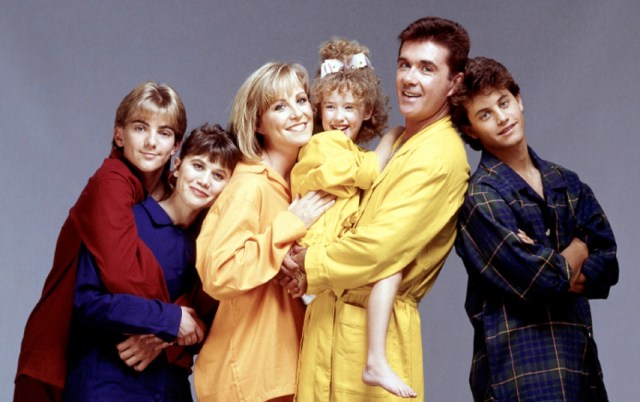 For much of the late eighties into the nineties, family sitcoms were quite popular in American households. The hit ABC program Growing Pains was certainly among the best of those types of shows on television.

The series revolved around an all-American family, the Seavers, living in Long Island, New York. It was typical in structure, where the family consisted of a mom, dad, and their few children growing together in true, yet entertaining sitcom style. Running for seven seasons, it was one of ABC’s most popular primetime programs and never even ran on the network’s TGIF Friday night lineup. It had always been widely popular to many viewers over the years, running in syndication on several networks and even bringing about two made-for-TV movies as well.

But since its last aired episode in 1992, what has the cast of the show been up to?

Canadian actor Alan Thicke, the father of R&B singer Robin Thicke, played the family patriarch, Jason. He’s a psychiatrist that runs his private practice out of the Seaver household because his wife Maggie has gone back into the workforce. Countless plotlines on the show focused on Jason’s parenting efforts which were always intriguing since he was the rare — at that time — stay-at-home father.

At the beginning of Thicke’s career, he gained experience as a game show host in his native Canada, starting in the mid-1970s. That branched off into talk show gigs in the U.S. that ultimately didn’t pan out, leading him to Growing Pains. After that show, Thicke would spend the next 25 years continuing to act in TV shows and movies, as well as hosting numerous variety TV events that aired internationally. He last made an appearance, posthumously, as a celebrity competitor on Food Network’s Chopped in 2017. On December 13, 2016, Alan Thicke passed away from a heart-related issue, suffered while playing ice hockey. He was 69 years old.

The role of mom in the Seaver household went to American actress Joanna Kerns. She plays the role of Maggie, a former stay-at-home mom who essentially switches parental roles with her husband Jason in the family unit. Instead of keeping things running at home, she jumped into the workforce as a local reporter, while Jason did his business from home.

Originally a dancer during her early years, Kerns made the transition into acting in the mid-1970s. For the next 10 years, she would build an impressive television resume with numerous guest appearances in TV shows like Charlie’s Angels, Three’s Company, and Magnum, P.I. before landing her most notable role on Growing Pains. Through her time on the show, as well as long afterward, Kerns appeared in countless made-for-TV movies. However, she found a sweet spot behind the camera, as a director, a position that she’s flourished in ever since directing one of the last episodes of Growing Pains. From there, she would direct television programs such as Ally McBeal, Dawson’s Creek, ER, Grey’s Anatomy, and Fuller House, just a few of so many on her resume. Her most recent work acting work was a 2017 comedy video called, Danny Brown: Ain’t It Funny, while her last directorial project was for three episodes of the family drama A Million Little Things, in 2022.

Former teen heartthrob Kirk Cameron played Mike, the eldest child in the Seaver family. He’s a handsome, charming, yet mischievous teenage boy whose antics often made hilarious trouble not just for himself but his other family members throughout the series. And despite not always setting the best example for his younger brother Ben, he was still at the very least a decent role model.

Kirk, like his sister Candace, started his acting career as a child, taking small TV and film roles and even appearing in commercials. But Kirk hit super-stardom when he co-starred in Growing Pains, winning several acting awards. After that show was over, Cameron eventually starred in another sitcom, a self-titled show called Kirk, playing the lead role for two seasons, starting in 1995. He would then step away from the mainstream to exclusively work on projects that had Christian-based themes, stemming from his ongoing devout involvement in the religion which began in the early 1990s. That, in addition to his conservative political views, has given him an avenue of entertainment that doesn’t often mesh well within contemporary American pop culture. His last TV appearance was a guest role in 2019, in an episode of his sister’s show, Fuller House, while his most recent film work was in a documentary titled The Homeschool Awakening in 2022.

Gold was cast as Carol, the first-born daughter in the Seaver family. Her character often clashes with her big brother Mike, in a typical teenage fashion that usually made for lots of laughs. Carol, along with her brothers, would eventually gain a little sister during the show’s later seasons.

Performing ever since she was four years old, Gold had over 30 appearances on her resume before getting the role of Carol. It was the biggest role of her career as she became a teen star during the show’s seven-year run. However, she would also endure a highly publicized battle with anorexia, which temporarily put not just her career but obviously her health in danger. After getting through the disorder, Gold has continued with acting, including a remarkable performance in the 1994 TV movie, For the Love of Nancy. Gold overwhelmingly stuck with television appearances over movies during the last 30 years of her career. She was last seen in 2022 as a contestant on Food Network’s competition show, Worst Cooks in America.

The character of Ben, the younger Seaver son on the show, was played by Jeremy Miller. Ben is slightly younger than Carol but even younger than his brother Mike, making Ben even more impressionable within the family household. The age gap between his brother and him made for even more humorous moments over the years.

Miller’s role as Ben would be the most popular part he’s played so far in his ongoing career. Before Growing Pains, he only worked on a handful of productions including one appearance on the hit eighties comedy, Punky Brewster. Miller would reprise his role as Ben in the two Growing Pains movies that followed in 2000 and 2004. Over the years, he also became known for providing the voice of Linus in a few Charlie Brown productions during the eighties. Miller has only stuck to small, less-demanding roles primarily on television with his last credited role coming in 2021, a direct-to-streaming indie film called True to the Game.

The last addition to the Seavers was a baby girl named Christine, or “Chrissy,” originally played by twin babies Kelsey and Kirsten Dohring during season five of the show. The character was advanced in age by the producers, opening the door for Ashley Johnson to be cast in the role for the last two seasons of the program. Chrissy brings the typical yet refreshing child-centric comedy to countless plotlines in the show.

Since then, Johnson would continue to find lots of work on TV, having roles in nearly 10 separate programs by the time she became a teenager. She also lent her voice talents to several popular animated shows like Disney’s Recess, Teen Titans, and several versions of the Ben 10 series of shows, to name a few. Her most popular voice work though involves the voice and motion capture performance as Ellie in The Last of Us series of video games, earning her both a BAFTA and a VGX Award for the role. Johnson has also taken off with considerable work in numerous board gaming-related web series. She’s also stuck to acting in recent years as a regular cast member of the NBC drama series Blindspot, for five seasons. Johnson just completed work, reprising her role as Ellie in the TV version of The Last of Us, currently in post-production.

Yes, the award-winning actor Leonardo DiCaprio was once a recurring cast member of Growing Pains, during its seventh and final season. He played Luke, a homeless teen who’s brought into the fold to live with the Seavers. Luke provides more fresh-faced and charming adolescent charisma to the family environment.

DiCaprio was nowhere near the megastar we all know by the time he joined the cast of Growing Pains. At that time, he made recurring and guest appearances in popular shows like The Mickey Mouse Club, Parenthood, and Roseanne before being cast as Luke in Growing Pains. When he left that show, he jumped into movies, co-starring in notable films like What’s Eating Gilbert Grape, The Basketball Diaries, Romeo + Juliet, oh, and that movie about that really big boat called Titanic, which shot him into A-list territory, never looking back. After Titanic, the big screen has been where it’s at for Leo, as he’s played numerous award-worthy roles in more films like The Aviator, Blood Diamond, The Departed, The Wolf of Wall Street, Once Upon a Time in Hollywood, and The Revenant, for which he won the 2016 Best Actor Oscar.

Leo’s definitely still acting, but he’s also doing a considerable amount of producing behind the camera, along with plenty of humanitarian work, political activism, and environmental activism. Just recently, he wrapped up shooting scenes for Killers of the Flower Moon and has two more films, Jim Jones and Roosevelt expected as soon as 2023.