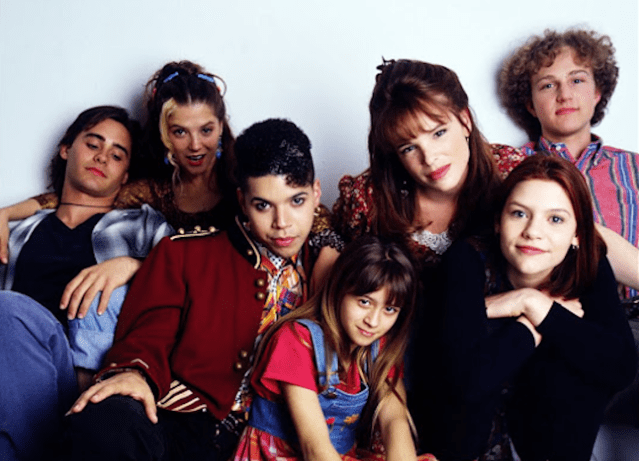 My So-Called Life was an instant sensation when it premiered in 1994. The series was addressing some of the biggest issues that adolescents were encountering — in some cases, for the first time ever on TV — in an authentic way. Angela was someone we could all relate to.

Despite its universal appeal, the show was canceled after only one season. It was the type of show you put on just because you can’t find anything else to watch, but then a week later, you’re looking for it, and the next thing you know you’re hooked.

My So-Called Life didn’t rely on tropes, instead it created new ones. Instead of being the precocious teenager like Blossom before her, Angela’s character was so uniquely herself, confused but not ready to grow up too fast. This is a show about the ’90s, and maybe it ended when it was supposed to.

Today we catch up with the cast.

Sharon became old news when Angela started hanging out with Rickie and Rayanne. Before that, she and Angela had been inseparable. The turn of events left Sharon bitter and hurt, until she and Angela have a heart-to-heart following Sharon’s father’s heart attack.

Post-My So-Called Life, Odessa has had multiple TV roles, including Pacific Blue, Touched by an Angel, and That’s So Raven.

Odessa is married to Disney executive Jeff Baldinger and they have two children, a boy and a girl.

Straight-A student Brian is secretly in love with Angela, but hopelessly paralyzed from acting on his feelings, aside from desperate acts that account for nothing.

A writer and director, Gummersall has directed episodes of Nashville. He’s also had roles in Mad Men, Criminal Minds, and The Last Ship.

From an abusive home, Rickie has the most tragic story of any of the teenagers in the show, and has the distinction of being the first openly gay character on network TV.

Since My So-Called Life, Cruz has had multiple film roles, including Oliver Stone’s Nixon, Party Monster, and The People I’ve Slept With, as well as TV roles in Grey’s Anatomy, Ally McBeal, and Shameless, among countless others. Currently, he is a recurring guest on 25 Words or Less.

Cruz’s relationship status is unknown, but he poses a lot with his brother on Instagram, and they look hot!

Perhaps the most troubled student at Liberty High, Rayanne portrayed herself as fun-loving girl, ready to try anything once, but deep down, she’s hiding a severely insecure young woman, desperately seeking the approval of her friends.

A.J. Langer played the part fabulously, with a passionate nuance and sheer talent. After My So-Called Life was canceled, Langer had multiple bit roles on various TV shows before landing the role of Lauren Woods on the sitcom It’s Like, You Know.., and then Annie Bernstein-Flynn on Three Sisters. She also played Utopia in the film Escape from L.A.

Her life took an expected turn when she married lawyer Charles Courtenay, and eventually became the Countess of Devon, a role she still plays today. She and the Count and their two children currently reside in the Powderham Castle in London.

Held back two years, Jordan has a learning disability. Under the surface, he’s clearly carrying around a lot of pain. As Angela’s love interest, it’s clear that she is a light in his life, but also that they are painfully mismatched.

In the years since My So-Called Life, Leto has become a bona fide movie star. With a filmography a mile long and a successful music career as well, we can expect to see a lot more of him. Most recently, he co-starred with Anne Hathaway in WeCrashed, the chronicle of Adam and Rebekah Neumann, the New York power couple who founded WeWork. Upcoming projects include a role as Andy Warhol in a biopic written by Terence Winter and produced by Michael De Luca.

Desperate to redefine herself, Angela dyes her hair red and dumps her best friend. After starting to hang out with Rayanne and Rickie, she starts to feel alive.

Straight after My So-Called Life, Danes had her first feature film role in Little Women. She has had multiple film roles, including Romeo and Juliet, The Hours, and Shopgirl. From 2011 to 2020, she played Carrie Matheson on Homeland.

Danes is married to actor Hugh Dancy. They live in Manhattan with their two boys.

While the show didn’t last long, it was clear the cast had a lot of staying power and you can see them across your screens!