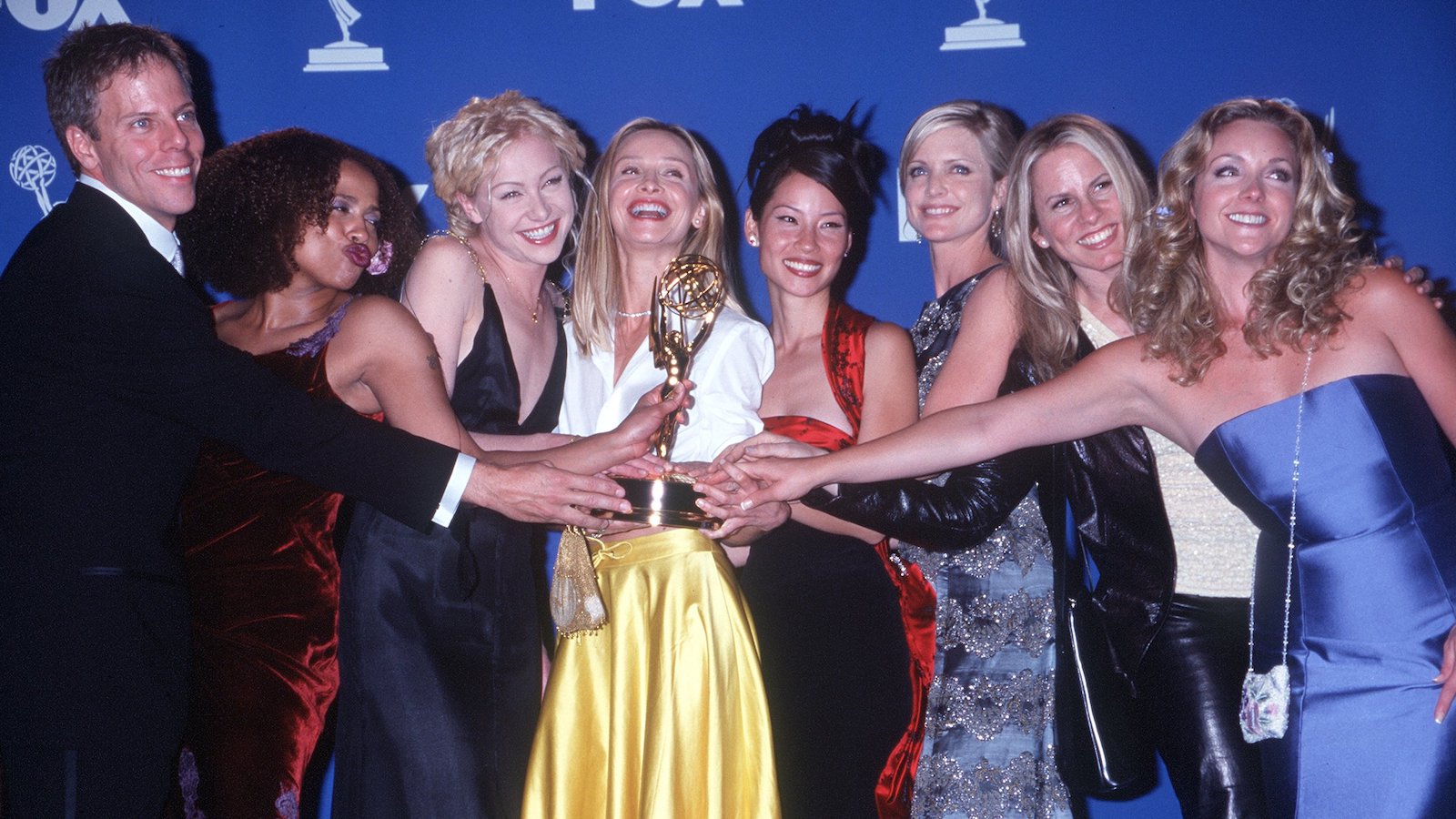 She didn’t even want to be a lawyer. She pulled a Legally Blonde. Or Elle Woods pulled an Ally McBeal. We can’t be sure, the time lines are parallel.

Ally McBeal may seem antiquated when compared to the fare available to us nowadays. But — no shade — this show was straight-up smart-girl action back in the day. How many young women were inspired to go after their dreams by watching the confident but insecure, not-getting-caught-up-in-all-of-it Ally McBeal?

Now that there’s talk of a series re-boot, it’s time to revisit the cast and catch up with them.

Greg Germann won a Screen Actors Guild Award for playing Ally McBeal’s money-grubbing boss Richard Fish on the late-nineties TV series. He has had multiple acting gigs since then, including Ned & Stacey, Law and Order, and countless films. On his Instagram, Germann promotes The People Concern, an organization devoted to ending homelessness.

Germann’s son Asa will star alongside London Thor, Derek Luh, and Shelley Conn on The Boys spinoff, which is currently untitled.

Lisa Nicole Carson played Ally’s outspoken roommate Renée. Carson has been open about her struggles with mental health, particularly bi-polar disorder. Since Ally McBeal, she played Mae Bell in the miniseries The New Edition Story in 2017. The BET series chronicles the formation and rise to stardom of the eighties boy band. The show received critical acclaim for its casting and performances.

Ally’s insufferable, tab-keeping assistant Elaine was played by Jane Krakowski. Since Ally McBeal’s cancelation in 2002, Krakowski’s roles have been vast and varied. She received four Primetime Emmy Award nominations for her portrayal of Jenna Moroney on 30 Rock, and played Jaqueline White on Unbreakable Kimmy Schmidt. She has also had multiple roles in film and stage plays and won the Laurence Olivier Award for Best Actress in a Musical for her role in Guys and Dolls.

In 2021, Krakowski told Today — in regard to all of the flawed characters she has played — that she “has radical compassion for them all.” That’s very generous, since many of those characters have been hilarious narcissists, tugging the plot along by being the main provider of conflict that must then be resolved by the rest of the cast.

Peter MacNicol plays perhaps Ally’s closest confidant at work, John Cage, for which he scored a Primetime Emmy Award for Outstanding Supporting Actor in a Comedy Series. Since then, he has had countless supporting TV roles, including Jeff Cane on Veep. Also notable are the many animation characters he has voiced, including Dr. Kirk Langstrom/Man-Bat in The Batman, David Clinton/Chronos in Justice League Unlimited, and Professor Ivo in Young Justice. Not much is known about MacNicol’s personal life, presumably by choice.

Billy Thomas, Ally’s past sweetheart, was portrayed by Gil Bellows. In the years since Ally McBeal, Bellows has had multiple TV roles, including The Agency, Second String, and The Twilight Zone. He even had a bit role as a maternity doctor on The Handmaid’s Tale in 2019. In 2020 he starred in the Freeform (formerly ABC Family) series Love in the Time of Corona, alongside his wife and daughter.

Courtney Thorne-Smith plays the long-suffering, incredibly patient wife of Billy Thomas. Post-Ally, Thorne-Smith had a role on According to Jim from 2001-2009, Two and a Half Men from 2010-2015, and did voice work on Robot Chicken. In 2007, she wrote a novel titled Outside In, about body image and accepting one’s self at any weight. Most recently, you may have seen Thorne-Smith playing a bit role on Mom. She is married with one child.

After the death of comic Norm Macdonald, she was a guest on Inside Conan: An Important Hollywood Podcast, where she talked about being interviewed by Conan in 1997 on his late night talk show while sitting next to Macdonald, who had no idea who she was. He then began to roast her for her decision to leave Melrose Place to do a movie with Carrot Top, Chairman of the Board.

She doesn’t have any bad feelings about it, according to The Hollywood Reporter, instead she was grateful to not have to promote the film, which, he was right, ended up being a box office dud.

After playing Nelle Porter on Ally McBeal, de Rossi is perhaps most well-known for her portrayal of Lindsay Bluth Fünke on Arrested Development, and for being the wife of Ellen DeGeneres. But she’s also had stints on Nip/Tuck, Better Off Ted, and Scandal. And she’s the founder and CEO of General Public, which markets textured art prints, called synographs, to patrons who would like to purchase original art but may not have the time to visit galleries.

After playing Ling Woo in Ally McBeal, Lucy Liu’s expansive career has included multiple film roles, among them Charlie’s Angels, Paycheck, and Shanghai Noon, as well as TV roles and voice work for Kung Fu Panda, Maya & Miguel, and Mulan II. Liu has a son, Rockwell, and lives in Manhattan.

The multi-talented Vonda Shepard was called upon each time Ally brought a date to the bar in the ground floor of the same building with Cage, Fish & McBeal. And that also goes for girls’ nights out or after-dinner drinks. She was the nightclub singer who had the opportunity to show off her chops quite often in the show’s run (lawyers drink a lot). Shepard has released a total of 15 albums. She is married with one child and lives in California.

Fellow lawyer and love interest, Larry Paul was portrayed by Robert Downey Jr. His departure from the show may have contributed to its downfall. In the years since Ally McBeal, Downey Jr. has enjoyed a successful career. Once an actor, now a movie star, he’s had more roles than we can list here and his share of controversies. His latest project is  Downey’s Dream Cars, a hot rod eco-centric series on Discovery Plus where he endeavors to restore old hot rods to eco-friendly vehicles. Fans can also look for him in The Parker, for Amazon Prime Video, as well as the sports comedy-drama, All-Star Weekend, and the biographical Oppenheimer. He and his wife Susan have two children and live in East Hampton, New York.

Hayden Panettiere played Maddie Harrington, Ally’s daughter she didn’t know about. Since Ally McBeal, Panettiere scored two Golden Globe nominations for her role as Juliette Barnes on Nashville from 2012-2018. She also starred in Scream 4, Scream (2022), and plans to reprise her role as Kirby Reed in the upcoming sequel in 2023. She’s also starred in a string of movies and done voice work for the video games Kingdom Hearts and Until Dawn.

Panettiere’s activism spans the areas of dolphin rescue — documented in the film The Cove in 2007 — defending Aboriginal whaling, and an eBay auction for Save the Whales Again.

She has an eight-year-old daughter and lives in the Palisades, New York.

Calista Flockhart won a Golden Globe Award for her role as Ally McBeal. Post-Ally McBeal, Flockhart had a stint as Kitty Walker on Brothers & Sisters, where she starred alongside an ensemble cast including — among others — Balthazar Getty and Rachel Griffiths, and as Cat Grant on Supergirl.

She is married to Harrison Ford and they live on an 800-acre ranch in Wyoming with their adopted son, Liam Flockhart Ford.