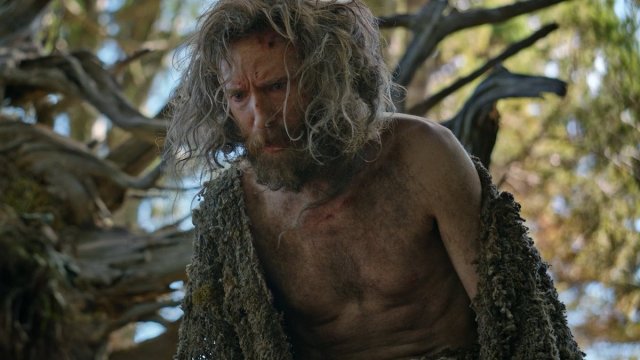 Warning: The following article contains spoilers for the first two episodes of The Lord of the Rings: The Rings of Power.

J.R.R. Tolkien always believed in telling his stories in a way that would leave audiences with questions and mysteries worth pondering over, and The Lord of the Rings: The Rings of Power has taken a page out of the legendary author’s book in its ambitious five-season narrative.

As early as the first season, Amazon’s show intrigues fans by introducing them to the enigmatic Stranger, who arrives on Middle-earth via a literal meteorite. That’s right, folks. In the final moments of the pilot episode, as Galadriel is making her way to the Undying Lands, the gazes of our ensemble are stolen away by a sizzling comet making its way to Arda at great speed.

It hits somewhere near where the Harfoots dwell, compelling one of them — a protagonist by the name of Elanor Brandyfoot — to seek it out. When she arrives at the crash site, a man is huddled in on himself amid fire and smoke. When she touches him, the mysterious traveler takes hold of her hand and bellows a roar, consuming all the flames surrounding him. He then lets out a breath and the ground takes fire again.

The show doesn’t reveal much about the so-called Stranger even in the second episode, so who could he possibly be?

Who is The Stranger in The Rings of Power?

The most obvious answer to this question is that there’s no answer. The showrunners have intended this to remain a mystery, and by Eru, it’s going to remain a mystery until they decide to unveil who the Stranger is. That being said, a riddle has never stopped a fandom from speculating, so if we were to theorize, there are a number of viable candidates fitting what we’ve learned about the Stranger thus far.

Most fans seem to think he’s Gandalf, and with good reason, too. In fact, we’re almost inclined to say that the writers actually want you to believe he’s the Grey Pilgrim with all the hints they’ve left lying around. For one thing, the character seems to possess the same power as Gandalf in terms of making his voice loud or making the environment dim, or summoning up a storm. And for another, he does appear to have a talent for speaking with small insects.

One of the most well-known mental images people associate with Gandalf is him whispering to a moth in Peter Jackson’s The Fellowship of the Ring when he was imprisoned atop Saruman’s tower. When The Stranger talks to a bunch of fireflies in The Rings of Power, the motion of his hand and the sway of his body seem to be directed in a way to purposefully bring Gandalf to mind.

And even if it isn’t Gandalf, this Stranger could be one of the Istari, the five wizards sent to Middle-earth to combat the resurgence of Sauron. Sure, the Istari came to Middle-earth in the Third Age and all were seen to arrive by Círdan the Shipwright, but that doesn’t mean one of them couldn’t make an earlier dramatic entrance.

There’s a passage in Unfinished Tales which says the Istari didn’t retain their memory of the Undying Lands, and they had to “learn much anew by slow experience.” That seems eerily familiar to the way we saw The Stranger behave, having no clue of where he’s landed or who he’s supposed to be.

There’s yet another possibility, one involving a creature perhaps as old as the land itself; a creature that no Tolkien fan has ever been able to discern the true nature of, and nor are they supposed to. We’re talking, of course, of Tom Bombadil, the enigmatic figure who helped Frodo and the rest of the Hobbits when they entered the Old Forest.

That might seem like a controversial choice, especially since Bombadil’s whole point is to remain enigmatic, but with Bombadil and Hobbits being as intertwined in the narrative as they were, it might be a good opportunity for Amazon to show the creature as helping their ancestors, the Harfoots, in their trials to found the Shire and settle down.

Then again, showrunners Patrick McKay and J.D. Payne have all but outright said that The Stranger is a being similar to Gandalf or Saruman. Or did they?

“Well, I would say those are not the only beings, those names, in that class. So maybe, but maybe not. And the mystery and the journey of it is all of the fun, I would say,” McKay said.

Has Gandalf made a return? Is this the wizard Saruman? Are we finally going to see one of the Blue Wizards on-screen? Or is this being someone else entirely? I guess we’ll know the answer to that and more as The Rings of Power continues to chronicle this new adventure in the weeks to come.