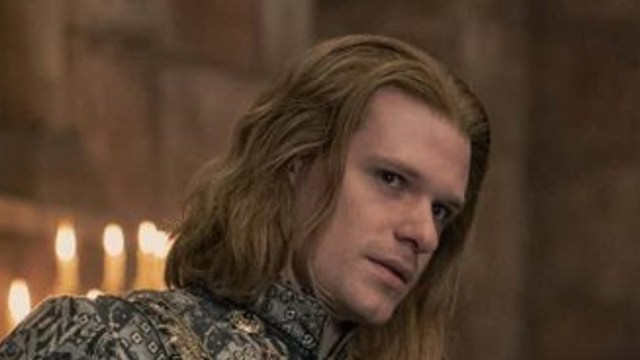 Warning: the following article contains spoilers for House of the Dragon season 1, episode 5, “We Light the Way.“

Joffrey Lonmouth made his official debut in episode five of House of the Dragon and it was a big one. The name holds weight in the Game of Thrones franchise, and in the prequel series, Joffrey Lonmouth is played by Solly McLeod, a knight who serves House Velaryon and fought against the Triarchy at the Stepstones.

In episode five, “We Light the Way,” Princess Rhaenyra (Milly Alcock) is betrothed to Laenor Velaryon (Theo Nate), but it doesn’t go off without a hitch. As the two are walking on a coast in Driftmark, Rhaenyra implies that she knows about Laenor’s preferences for men. She uses a metaphor about liking “duck” over “goose” and when Laenor asks what she’s proposing she responds, “That we perform our duty to our fathers and to the realm, and when it’s done, each of us dines as we see fit.” It’s an arrangement where both parties can get what they want.

Later, Laenor and Joffrey spend some private time together sitting in the grass and conversing. Joffrey says that he’s always feared the day Laenor would have to marry a woman and mentions the arrangement Rhaenyra spoke of. Laenor gets upset at Joffrey for making a joke of the situation, but his paramour is excited about it. Rhaenyra will be the queen of the seven kingdoms and Laenor will be her king consort. There will be great tournaments, feasts, and battles at sea. Joffrey says that he will need a sworn protector, and he willingly takes on that role, telling him that this is the best situation he could have hoped for.

In Fire & Blood by George R.R. Martin, Ser Joffrey Lonmouth was known as the Knight of Kisses and there were rumors about his romantic relationship with Laenor. House Lonmouth is from the stormlands and sworn to House Baratheon (Robert Baratheon in GOT would later “father” Prince Joffrey). The house’s arms consist of red lips and skulls, which seems like a portend for the young man’s fate. The series gives us a different version of it with more details that’s set in a different location.

The show has House Velaryon traveling to King’s Landing for the event and Joffrey, as Laenor’s sworn protector, comes along with. Joffrey pays attention to Rhaenyra and Criston’s body language and puts together that the two are romantically linked. Joffrey reveals to Criston that he knows their secret and that the two of them can make the most out of their positions. Criston takes offense to this and loses control, attacking him and then killing him at the gathering.

In the book, Joffrey’s death happens at the tourney where he rides as Laenor’s champion. Ser Criston Cole attacked him using the morningstar weapon and Joffrey dies six years later. Neither ending was all that positive for Joffrey Lonmouth. King Joffrey in GOT died at his own wedding, which was named the Purple Wedding, so it’s probably best for individuals with that name to avoid these celebrations in the future.