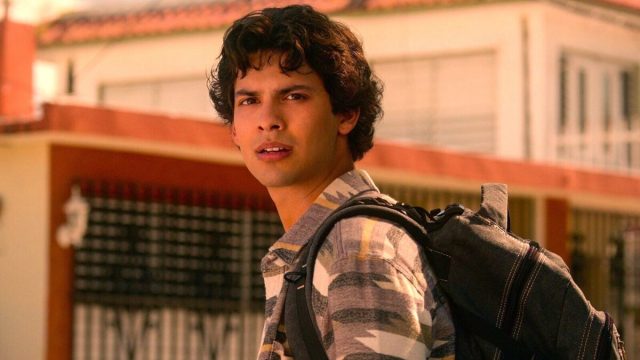 Cobra Kai has returned for its fifth season, and in doing so has answered a major question fans have had for years. At the end of the last run, Miguel Diaz (Xolo Maridueña) fled the valley and headed to Mexico to find his estranged father. Sure enough, the former karate champion encounters his long-lost dad for the first time in this new batch of episodes, revealing all we need to know about the mysterious character in the process.

In the opening episode, Miguel succeeds in tracking his father down — he’s Hector Salazar (Luis Roberto Guzmán), a man his mother claims is a dangerous mobster but who appears to be a loving husband and father to a young son. Miguel first makes contact with Hector when he saves the boy from running in front of a car. Thanks to his courageous act, Miguel is invited to stay at the Salazar home.

Miguel quickly discovers his dad has no idea he even has an eldest child, so he masquerades as just a random tourist. At first, Miguel is overwhelmed by how perfect Hector seems, but his rose-tinted view starts to fade when Hector takes him to his underground fight club, at which point it becomes clear that he maybe hasn’t put his criminal past totally behind him.

When Johnny (William Zabka) and Robby (Tanner Buchanan) turn up looking for Miguel, Hector fears they are with the FBI and even threatens Miguel, figuring he’s involved in this “sting.” After believing him innocent, Hector takes Miguel to his safehouse and the penny finally drops that he’s an uncaring and self-absorbed man. Realizing Carmen was right about him all along, Miguel returns to California with Johnny and Robby to be with his real family.

Hector only features in the first two episodes of the season, but the sad truth about him inspires Miguel’s arc for the remainder of the run, as the teen decides to make amends with old enemy Robby, be there for his mom, and generally just be nothing like his dad.

Cobra Kai season five is available to stream on Netflix.