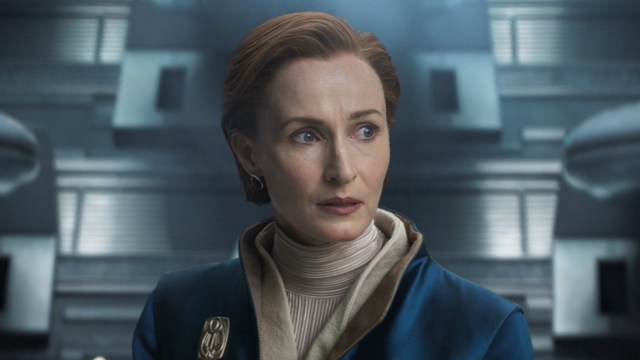 In the world of Star Wars there are countless characters ranging from Jedis to bounty hunters to Sith Lords, and it’s easy to overlook the more subtle bureaucratic characters who had a hand in fighting the war in a different way. Mon Mothma is one such woman who hasn’t been seen wielding a lightsaber, and yet without her, the Republic might have been destroyed.

In the new series Andor, Genevieve O’Reilly will be reprising the role of Mon Mothma, a leader of the Galactic Senate’s Loyalist faction during the Galactic Republic’s reign. O’Reilly originally played the character in Star Wars: Revenge of the Sith, although the character of Mon Mothma first appeared in 1983’s Return of the Jedi, played by Caroline Blakiston. Blakiston was one of the only women to have a speaking part in the original Star Wars trilogy, and O’Reilly was chosen because of the uncanny resemblance.

In Return of the Jedi, Mon Mothma was a leader of the Rebel Alliance who briefed its members about the Battle of Endor. What seemed like a straightforward scene that didn’t last all that long would grow over the years into one of greater importance. Mothma was from Chandrilla and her family engaged in politics, which inspired her early on to go down that same path. She became one of the youngest senators and remained outspoken about the war between the Republic and the Separatists throughout her political career.

O’Reilly didn’t have a speaking scene in Revenge of the Sith, but a deleted scene in the DVD release showed the conversation she had with Bail Organa (Jimmy Smits), Padmé Amidala (Natalie Portman), and other trusted Senate members. Organa shares his concern about the Chancellor having taken control of the Jedi Council, which allows him to see all star systems in the Republic. Amidala is concerned that he will dismantle the Senate, but Mothma points out that the Senate doesn’t really exist anymore. They want to fight back against Palpatine’s actions, but they don’t want to be seen as Separatists. Mothma says they are Loyalists who want to preserve democracy in the Republic.

Mothma is active during the Clone Wars and makes multiple appearances in the Star Wars: The Clone Wars animated series. She sees how Palpatine’s growing influence has negatively affected the Republic and knows she has to do something. Mothma pushed for the reduction of the clone troopers, befitting her anti-war stance, and in time the production of them stopped. Palpatine would eventually overtake the Jedi Council near the end of the Clone Wars. He manipulated Anakin (Hayden Christensen) to the Dark Side and Amidala dies in childbirth, leaving Mothma and Organa to continue the to fight without their trusted ally.

In Rogue One: A Star Wars Story, Mothma sanctioned the recruitment of Jyn Erso, daughter of Galen Erso, who was the scientist held against his will to create the Death Star plans. Jyn led the Rogue One squadron to steal those plans during the Battle of Scariff alongside Captain Cassian Andor (Diego Luna), and they completed the mission at the cost of their own lives.

Andor is a story about sacrifice, and Mothma will be seen in a whole new light. At this stage in her career, she’s a politician serving the galactic senate and she will have to grow into the Rebel leader she will become over the course of the series. O’Reilly has always been curious about the pain Mothma has endured in this life, and now, she will finally get to explore what’s brewing beneath that professionally stoic surface.