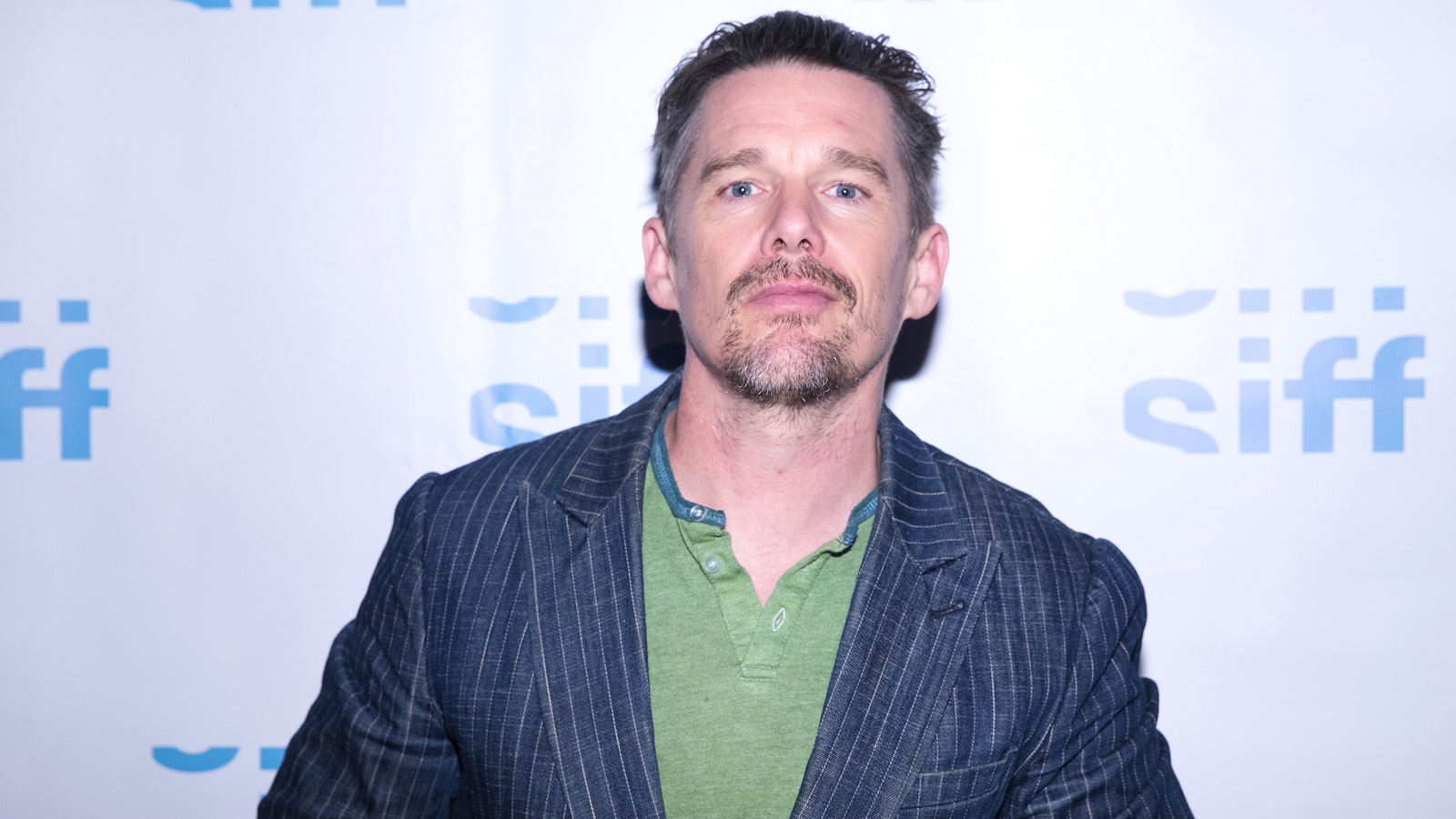 Ever since Marvel’s new Moon Knight series was first announced, one key mystery has been throwing fans for a loop. It has nothing to do with Oscar Isaac’s MCU debut and everything to do with the secret identity of Ethan Hawke’s villainous character. Even though Marvel Studios has yet to officially announce which Marvel character Hawke will be bringing to life on the show, the identity of Moon Knight’s main villain has been revealed.

Moon Knight, created by Jeremy Slater, will see Isaac playing Steven Grant, a “mild-mannered” gift shop employee who is tormented by blackouts, hallucinations, and memories of events he doesn’t remember happening. He soon discovers that he is suffering from a dissociative personality disorder and the name of one of his other selves is Marc Spector, a mercenary.

As evidenced in the official trailer for the new series, one of his multiple personalities also includes his transformation into the titular superhero. In the comics, Marc Spector is a former U.S. Marine who is attacked and left for dead near the ancient Egyptian god Khonshu’s statue. The deity resurrects his body in exchange for his services and makes Marc his champion.

Recently, Disney Plus shared new details about the live-action adaptation of the character. Disney Latino has revealed that in the series, Steven will be the original personality who starts suffering from dissociative identity disorder and starts manifesting the mercenary Marc Spector. Khonshu then brokers a deal with Marc “to become the bearer of his powers on Earth.”

But the bigger question isn’t how Moon Knight will be portrayed. The elephant in the room is…

Who is Ethan Hawke’s mystery villain in Moon Knight?

In the trailer, Hawke is seen sporting flowing grey-white hair while a crowd of loyal followers bows down in his presence. He is later seen meeting up with Grant. He first senses the “chaos” in Grant before advising him to “embrace” the same. While his monotonous brown outfit doesn’t offer any clues, the miracle of closed captioning reveals that Ethan Hawke will be playing a minor villain of Moon Knight’s from the comics: Dr. Arthur Harrow.

So Hawke’s been brought in to play a character who barely appeared in one issue of the expansive universe of Marvel comics, a name that even some of the die-hard Marvel zealots won’t recognize? Those dots don’t connect, do they? Before we straighten out this complicated question, let’s meet Mr. Harrow first.

Arthur Harrow: a villain with a potential for great evil

Arthur Harrow, also known as Agent Harrow, first appeared in the comic book Moon Knight: Fists of Konshu #2 in April 1985. He’s a gifted scientist up for a Nobel Prize in medicine because of his impressive research in “pain theory.” Another scientist, Dr. Victoria Grail, grows suspicious of his claims that he only performed his experiments on animals. Harrow’s villainous side is soon exposed when it’s revealed that he has secretly been using human test subjects against their will and using torturous methods to complete his research. What’s even more shocking is the fact that his monstrous experiments were being conducted on the orders of Nazi researchers and backed by the evil corporation known as O.M.N.I.U.M.

Things heat up when Marc Spector is also made aware of Harrow’s sinister activities via terrifying visions from the god Khonshu. He joins forces with Grail and finds Harrow’s lab, but the latter sets loose his army of senseless subjects who follow his orders and feel no pain. As the subjects refuse to back down even in the face of Moon Knight’s most powerful attack, he decides to flee the impossible situation along with Grail.

While Harrow is able to escape the chaos, surprisingly, this was his last appearance in the Marvel comics even though, towards the end, the O.M.N.I.U.M. chief assured him that his experiments would continue in Paraguay. So, for all we know, Harrow’s research went on throughout the years, without Moon Knight ever catching the smallest whisper of his whereabouts.

Even though Harrow’s one-time appearance was harrowing enough, he is still a rather minor character in the comics for Marvel Studios to choose him as the main villain in the upcoming series. Thus, either we will be getting a somewhat original take on the villain, with Moon Knight spinning a new tale of Harrow’s wicked activities (apart from the ones offered by the comic books), or perhaps the character will be merged with another rather familiar Marvel villain, something that is heavily hinted at in the trailer.

In the trailer, Harrow is seen surrounded by cult members who practically kiss the ground he walks on, appearing more like a fanatic leader, something the villain Sun King is known for in the comics. Also, Hawke has admitted that he based his villain on psychiatrist Carl Jung and the infamous cult leader David Koresh.

Who is Sun King?

In terms of history, there is not much information about Sun King’s mysterious past or what his real name was before he took on the moniker. All we know is that he was physically abused as a child and developed pyrokinetic powers early on, which he used to set his perpetrator on fire. His childhood was spent on the streets and later in juvenile detention centers. He is also known as “Patient 86” in the comics, as he was later admitted to the Ravencroft Institute for the criminally insane. It was there that he was introduced to Egyptian mythology and soon became a worshiper of the Egyptian sun god Amon Ra.

He soon became obsessed with Marc Spector’s superhero identity, Moon Knight, especially because he was the conduit of Khonshu, Ra’s son. He amassed an army of followers to end Spector and erase Khonshu from existence, and he almost succeeded in overpowering the vigilante, but Spector eventually got the upper hand and managed to defeat him. This event was enough to make Sun King change his ways, as even when he got the chance to exact revenge on Moon Knight, he instead chose to use his powers to “prevent the creation of ‘monsters’ like [him].”

So, will Hawke be more like Harrow or Sun King?

Hawke will probably end up taking select characteristics from both characters while donning an overall original personality. He’s described his character as a villain who harbors the misunderstanding that he is a good person and defends his horrifying actions by claiming that he’s working toward the greater good. Judging by how Hawke has described his character, chances are the MCU is on its way to introducing the updated version of Thanos ⏤ another menacing and even more terrifying self-defined messiah who will be on a mission to destroy lives while believing that he is curing the world of its vices.

While Harrow went missing and Sun King eventually joined forces with Moon Knight in the comics, here’s hoping that the MCU is not planning to assume a similar trajectory for its much-anticipated villain.

Moon Knight, billed as a limited series with six episodes, is set to premiere on Disney Plus on March 30, 2022.