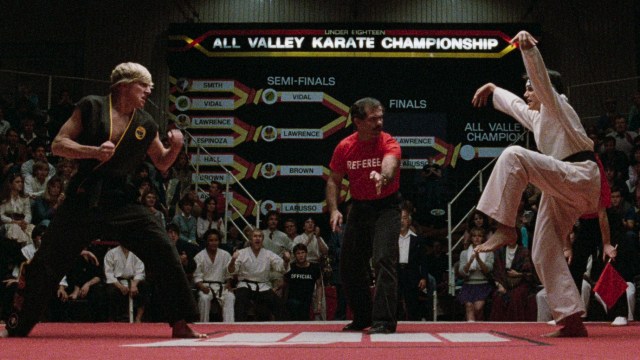 In the beginning, there was Cobra Kai.

Then there was Miyagi Do.

Once Cobra Kai was hijacked by its previous boss, the deflectors from Cobra Kai started Eagle Fang.

From that, the merger of Eagle Fang and Miyagi Do came to be. Right on cue, they split again before the big tournament to end season four.

As season four of Cobra Kai concluded, characters kept seeming to switch sides — or even abandon sides altogether. Then, in the final scene of the season four finale, we see both Eagle Fang and Miyagi Do together again. Still side-by-side, are they on the same side now?

Now, we have Miyagi-Fang to look forward to, for as long as that can last.

As season five is on the horizon, which dojo will rise to the top this time?

And, just who is on which side ahead of season five?

With John Kreese (Martin Kove) wresting control of Cobra Kai from Johnny Lawrence (William Zabka), the titular dojo has gone back to the dark side.

Raised in Cobra Kai, it leaves Lawrence heartbroken, but he decides he’d rather create his own thing, not defined by the past.

Just as he does that, though, his son, Robby Keene (Tanner Buchanan), deflects from Miyagi Do over to Cobra Kai to join forces with both Daniel LaRusso’s (Ralph Macchio) and Lawrence’s nemesis, Kreese.

Kreese and Kai have taken their darkness another step, enlisting fellow former member Terry Silver (Thomas Ian Griffith). Silver was prominent in Karate Kid III, and even after all this time he loathes LaRusso enough to come out of retirement and help Kreese.

Tory has also stayed in Cobra Kai, but by the end of her fight with Sam in the finale, we see that she’s starting to question and even shun their methods. Will she hop over to the other side?

The newly introduced Kenny Payne (Dallas Dupree Young) also looks to be a bigger part of Cobra Kai. Once bullied by Anthony LaRusso (Griffin Santopietro), Kenny turns the tables and thoroughly beats up Anthony, even though the former is trying to apologize. This is a full turn into the dark side of Cobra Kai.

Also on their side is long-time bully and tormentor Kyler Park (Joe Seo). His aggression pushes Miguel into karate in the first place, and the last time we see him, he’s fully entrenched in the Cobra Kai mentality.

Let’s not forget Sting Ray (Paul Walter Hauser), who gets to become a member of Cobra Kai again by letting Silver assault him to set up Kreese by blaming him.

Big Red (Christopher Ryan Lewis), Piper Elswith (Selah Austria), and Charlotte (Phoebe French), a newcomer that isn’t shown much but is also looking like she could become a more prominent member of Cobra Kai in season five, are all on the darker side.

Now that Silver has framed Kreese, there’s no telling where the storylines and divide of Cobra Kai could go in season five.

We’ll have to acknowledge that while some fighters might be on one side or the other of Eagle Fang and Miyagi Do, as season four concludes, they seem to finally be merging sides without all the animosity this time.

Will Miyagi-Fang survive through season five, or will some petty (or even real) differences between Johnny and Daniel split them apart yet again?

Perhaps they will see the value in entering the tournament as two separate sides as well, so they have more proverbial bites at the apple.

With that said, let’s explore who is in Eagle Fang at the end of season four.

Miguel Diaz (Xolo Maridueña) hangs with Eagle Fang after the split with Miyagi Do during the season. Ultimately, though, he suffers a reinjury in his previously broken back, and decides to withdrawal rather risk a debilitating injury, paving the way for an Eli-Robby showdown.

With that, he also sees that he needs to know more about who he is and to act on that immediately. He sets out to find his father in Mexico City, so he is in a gray zone of not on any team really.

As they have now become best friends, both Mitch and Bert stay with Eagle Fang when the inevitable split with Miyagi Do happens, and they too show big progress in the season.

Mitch (Aedin Mincks), after being booted out of Cobra Kai, joins Eagle Fang and is still there after season four.

Devon Lee (Oona O’Brien) is a newcomer to the circuit in season four and is recruited into Eagle Fang, where she impresses Johnny with her skills and knowledge. She is still there after losing to Tory in the tournament.

Miyagi Do scores big in season four by having some great fighters on their side through everything that goes down.

Samantha LaRusso (Mary Mouser) sticks with her original dojo after the season four split. Yet, she secretly continues training at Eagle Fang, too, opening the door to her embracing both during the finale and setting up the new Miyagi-Fang.

The man known as Hawk (Jacob Bertrand), and going by his real name Eli again, wins the All-Boys championship for Miyagi Do, so whatever direction Daniel San’s dojo goes in, we bet he’ll be there too. It seemed like he would be on the Eagle Fang side when the split happened, but as of now, he’s in Miyagi Do, even though he represents a bit of both.

His best friend, Demetri Alexopoulos (Gianni Decenzo), also remains in Miyagi Do, even helping convince Eli to get back to karate during tough times in season four. His character shows some true progress in the season all the way up to losing a fight against Robby in the tournament semifinals.

Abe (Jayden Rivers) is also in Miyagi Do after once being in Cobra Kai, and several other players in the scene are now on the Miyagi side, such as Frank (Cameron Markeles), Chris (Khalil Everage), Nathaniel (Nathaniel Oh), and Lil Red (Shane Donovan Lewis).

On their own / we’re not sure

We can say that Robby Keene is leaving Cobra Kai behind, and certainly looks to be on his own as season four ends. He has a reunion with his dad, Jonny, and is ready to embrace the future, but it doesn’t necessarily mean he’ll join his dojo.

We have a feeling he’ll be there with Miyagi-Fang, though, when season five kicks off.

We can’t wait to see and find out when season five of Cobra Kai hits Netflix on Sept. 9.