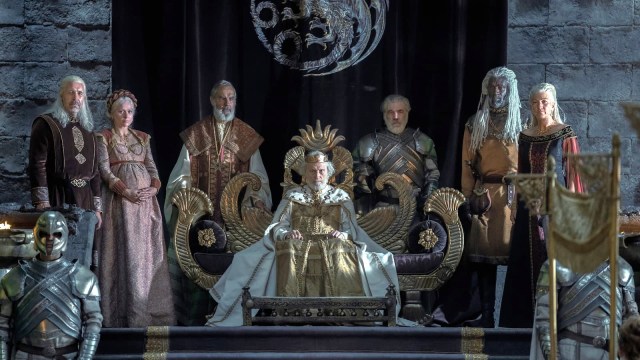 Merriam-Webster defines “kissing cousins” as “one that is closely related in kind to something else” and “a person and especially a relative whom one knows well enough to kiss more or less formally upon meeting”. However, the Targaryen family seemed to miss the message in terms of what this means.

By now, after so many seasons of Game of Thrones as well as even the first few episodes of House of the Dragon, it is clear the Targaryens do not mind incest. Why do the Targaryens seem to want and be fine with incest?

Why do the Targaryens take the “kissing cousins” concept literally?

It is clear to fans that the Targaryens are not opposed to incest at all. Throughout their history, they have proven this time and time again. This is because the Targeryens want to keep their bloodline within their own and not allow any outside blood into the family. The only reason they have rarely done this is with the hopes that it strengthens their position of power.

In House of the Dragon, just two episodes in, King Viserys is offered Lord Coryls and Princess Rhaenys’ daughter in marriage. Princess Rhaenys and King Viserys are first cousins. The King is appalled by this proposal, not because of the fact that they are related, but because of the young age of the daughter. Another example of the Targaryens is in Game of Thrones when Daenerys is being undressed by her brother.

Neither one of them seem to mind the fact that they are siblings, but Daenerys felt uncomfortable with the fact that she felt she was being used. Later on, Jon Snow and Daenerys start to fall for each other and develop feelings. However, it is revealed that Jon Snow’s father is really one of Daenerys’ brothers, Rhaegar Targaryen.

This would make Jon Daenerys’ nephew by blood. Even when Jon revealed this to her, she did not seem at all flustered or shocked and wanted to continue their relationship as normal. Jon knew that this was not right, and could not do it. But Daenerys knew all of her life and was told that being in relationships with family members is not just an okay thing to do, but it is very much encouraged.

Due to their inbreeding ways, that is why so many of the Targaryens seem to be crazy or mad. It is one of the problems that can be associated with inbreeding.