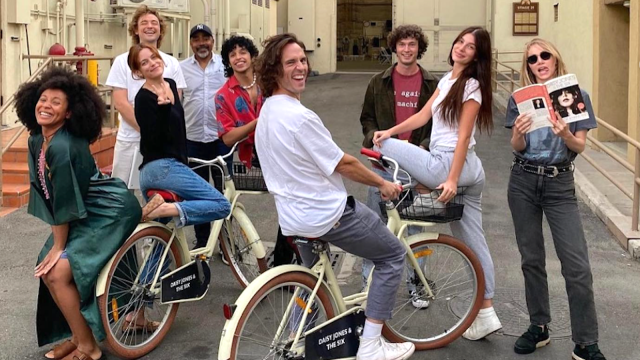 Not every novel can say it was picked up for a television adaptation before even being published. In 2018, eight months before it hit the bookshelves, Daisy Jones & The Six by Taylor Jenkins Reid was picked up by Amazon for a 13-episode limited series. Those familiar with the novel understand Amazon’s eagerness to do so: the novel’s format is practically made for TV.

Written and structured like a transcript of a music documentary, Daisy Jones & The Six follows the rise and fall of fictional 70s rock n’ roll band of the same name. The limited series will showcase a cast of impressive actors like Elvis Presley’s granddaughter, actress Riley Keough, and Hunger Games alum Sam Claflin, but the main question on everybody’s mind is whether the adaptation will include the original songs mentioned in the book or not.

Writing music in novels is not an easy thing to do, but Taylor Jenkins Reid managed to sneak not one, two, or even three song titles in her novel, but an entire discography. A couple of them even came with full lyrics. Now, thanks to Amazon Prime Video, fans don’t have to hum a made up melody in their heads any longer because the limited series of Daisy Jones & The Six will include several of the original songs, sung by the actors themselves.

It’s up in the air whether the lyrics Reid wrote in her novel will remain the ones sung by the actors on the show. It’s likely a few lines will get tweaked here and there, if only to strengthen the piece, but as long as the overall message remains the same fans should be happy.

Our minds immediately go to songs like “Aurora” and “Impossible Woman” as well as “Regret Me” and “Honeycomb”. Those and more are just a few songs named on Daisy Jones & The Six‘s album Aurora, which Reid created herself. The full track list of Aurora is the following:

Will the original songs be available to buy and stream?

Yes, not only will Daisy Jones & The Six showcase the original songs inside the pages of Reid’s novel, but the songs will also be available to buy, download, and stream exclusively on Amazon Music.

This is a smart move for Amazon Music, whose competitors, namely Spotify and Apple Music, dominate the streaming industry. If Daisy Jones & The Six proves a successful adaptation, fans of the novel won’t be the only ones flocking to Amazon Music to re-listen to the songs.

Suki Waterhouse, who plays the band’s keyboardist Karen Sirko on the show, sang high praise of her and her castmates’ musical prowess. “I’m so excited for what we’ve done musically. We’re actually a band. I think we’re going to be distraught [when production is over]. We keep talking about ways to extend our band together beyond the show…It feels like we’ve been in a band for 10 years.”