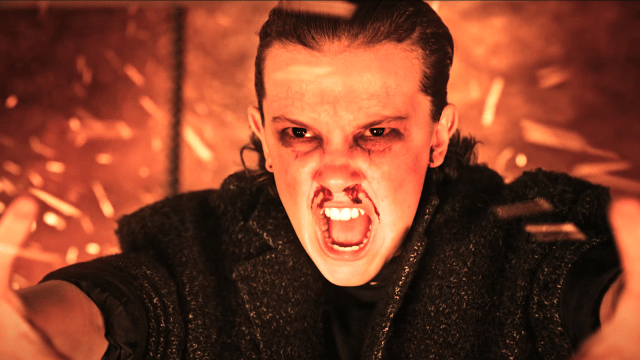 Netflix’s fantasy phenomenon Stranger Things is a melting pot of unforgettable characters that strengthen the credibility and uniqueness of the series. But, there is arguably no character more important to the show than fan-favorite Jane “Eleven” Hopper — a girl with telekinetic powers and an immense amount of courage. And now that Netflix has released the mind-numbing conclusion to the fourth season — which saw the tragic death of Eddie Munson and presumed death of Max Mayfield — fans are wondering if Eleven, too, will die during the show’s fifth and final season.

For some background, Mike, Dustin, and Lucas initially meet Eleven in the woods during the first season after she escapes Hawkins Lab, where she experienced years of psychological trauma at the hands of Dr. Martin Brenner. Eleven eventually warms to the rest of the Hawkins-based heroes and does whatever it takes to keep the Upside Down from destroying Hawkins and causing harm to her loved ones.

And now that Hawkins has been seized by Vecna and the Upside Down, many fans are speculating how the ever-popular series will end — which, unfortunately, could result in the death of Eleven.

So, will Eleven die?

Before Stranger Things was picked up by the streaming platform for multiple seasons, Matt and Ross Duffer initially pitched for the sci-fi mega-hit to solely be a miniseries, which would only last for one season. Instead, the insane jolt of popularity saw fans demanding for more content, and so, Netflix decided to keep the ball rolling with arguably their most profitable show of all time. Seeing as the Duffer Brothers’ initial pitch only saw the show lasting for one season, their original ending for the show would include Eleven sacrificing herself to the Upside Down to save the town of Hawkins.

While speaking with Esquire, Ross revealed that the plan from the beginning was to kill Eleven off — indicating that this was the “end game” that the brothers had orchestrated all along, saying:

“Eleven was going to sacrifice herself to save the day. That was always the end game. But once we realized that the show was potentially going to go on longer than one season, we needed to leave it more up in the air, because deep down we knew the show just wouldn’t really work without Eleven.”

While those comments from the Duffer Brothers were made years ago, you’d have to wonder that perhaps the idea to kill Eleven off is still very possible. Considering the show is preparing for its fifth and final season, a conclusion between Hawkins and the Upside Down needs to happen — and, unfortunately, Eleven is the major link between the two worlds.

And, if you don’t believe us, folks on Twitter are just as convinced that one of the show’s most beloved characters is staring death directly in the face.

Of course, these rumors were only fueled after star Millie Bobby Brown — who portrays Eleven — revealed in an interview that she wishes more characters would be killed off in Stranger Things. Naturally, fans began to panic, and some started to wonder if Brown was foreshadowing the possible death of her own character, saying:

“You need to start killing people off. The Duffer Brothers are sensitive Sallies who don’t want to kill anybody off. We need to have the mindset of Game of Thrones. Kill me off! They tried killing David off and they brought him back!”

Now, while the theories about Eleven dying in season five is purely speculation at this point, comments from both the Duffers and Brown have certainly convinced us further that the end could be near for the fan-favorite. For now, diehard fans and eagle-eyed Netflix subscribers can enjoy the entirety of Stranger Things 4, which is streaming now on Netflix.