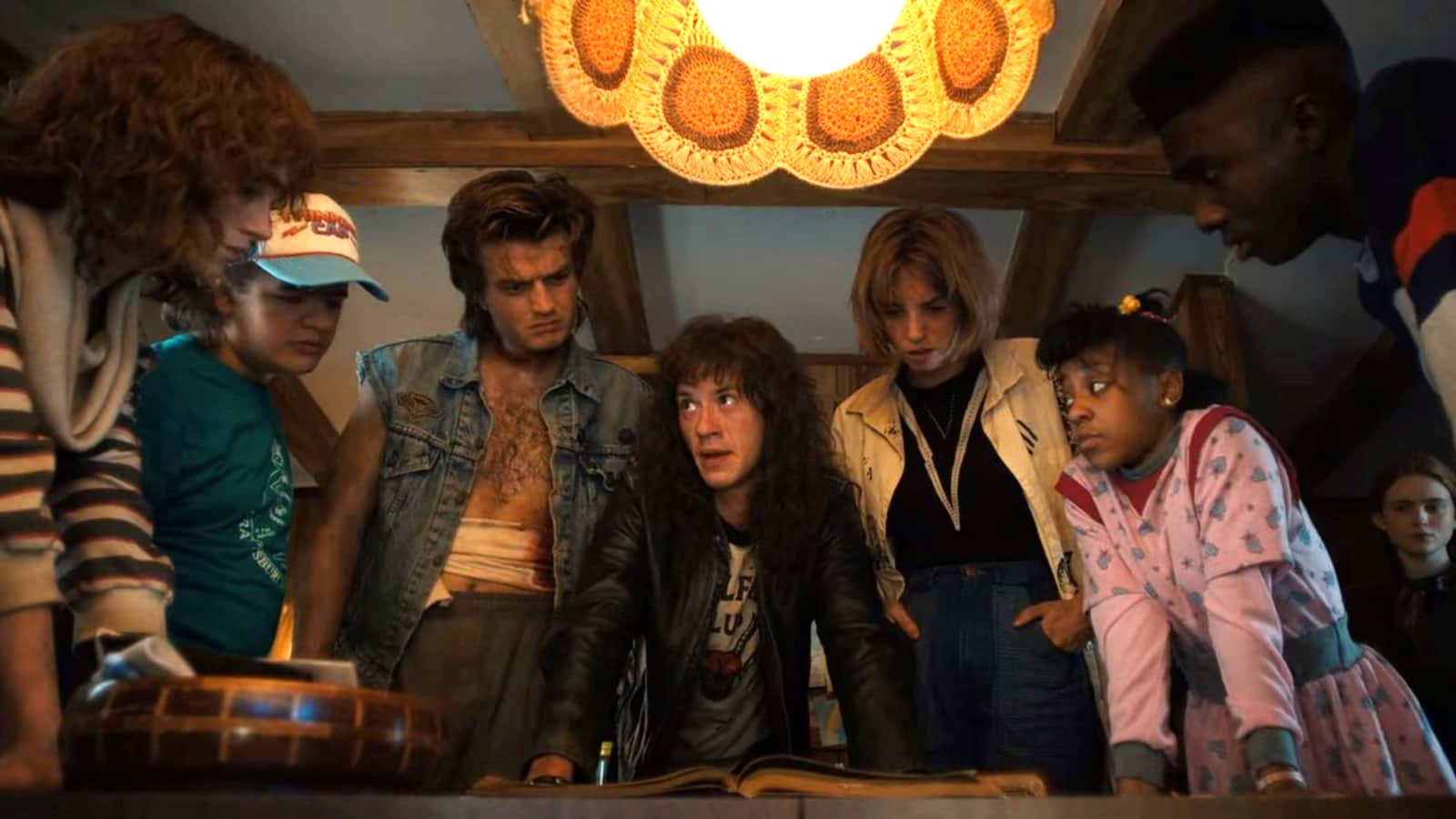 We all knew it was going to happen, after all the big teases, at least a few characters needed to die in Stranger Things season four, volume two. Netflix dropped the last two episodes of the fourth season on July 1, 2022, and they did not disappoint as we saw the Hawkins crew bring the fight to Vecna.

The last two episodes of Stranger Things featured the death of a fan favorite — albeit fairly new — character. Joseph Quinn played Eddie Munson, the head of Hawkins High’s Dungeons and Dragons group, The Hellfire Club. So how did the long-haired drug-dealing musician meet his end?

How did Eddie die in Stranger Things?

As the Hawkins team prepared to fight Vecna they formulated a multi-part plan. One of the steps in this plan to take down Vecna was to create a distraction so Steve Harrington (Joe Keery), Nancy Wheeler (Natalia Dyer), and Robin (Maya Hawke) could successfully — and quietly — infiltrate the Creel house in the Upside Down. The Creel house was surrounded by Vecna’s minions — who were also a part of Vecna’s hivemind — the Demobats.

To draw the Demobats from the Creel house, Dustin (Gaten Matarazzo) and Eddie rigged the top of Eddie’s trailer to be a makeshift stage, while fortifying the rest of it. Eddie grabbed his cool guitar — which was teased from the beginning of the season — and he began to perform an epic rendition of Metallica’s Master of Puppets. Their plan worked and sure enough, the Demobats were drawn in by the music. When the Demobats were close enough, they ditched the roof and jumped into the trailer.

In the trailer, they were momentarily safe, as they had fortified its exterior well enough that none of the Demobats could make their way through. Unfortunately, the trailer had two vents that Eddie had forgotten about and they eventually made their way inside. While the pair were at first able to repel the Demobats with their makeshift swords and shields, the Demobats proved too much for them, and they turned to flee back to Hawkins.

Choosing his moment to protect Dustin, once Dustin lept through the door back to Hawkins Eddie severed the connection between Hawkins and the Upside Down. Eddie left the trailer and hopped on a bike, causing commotion and forcing the Demobats to follow him. Eddie was able to fend off the Demobats for a while with his sword and shield, but he eventually was overcome by them.

Dustin managed to get back to the Upside Down and after Vecna had been taken care of, he rushed to Eddie’s side. Eddie got to have a few last words, as he expressed how happy he was that he didn’t cower in the face of adversity and that he did the right thing. Eddie then sadly succumbed to his wounds and died in the Upside Down. It would have been a shame if the series had left it there, and luckily they didn’t. After Hawkins and the Upside Down merged, and it was covered up as an earthquake, Dustin went to a local relief shelter. Eddie’s uncle made fliers saying that Eddie was missing and was putting them up on a corkboard when Dustin approached him to let him know that Eddie was dead.

The sad thing about Eddie’s arc in this season is that for most of the season he was a wanted man, suspected of orchestrating the Vecna murders. So when his uncle was putting up fliers, most of the town still assumed that Eddie had something to do with the murders. While Eddie made some new friends, like Steve, you can’t help but feel bad for the guy as he had so much potential.

Eddie was not the only one not to survive the season with both Dr. Brenner (Matthew Modine) and Jason Carver (Mason Dye) also biting the dust. Even though all three characters died it’s interesting to point out that Vecna did not actually kill anyone this time. Dr. Brenner was shot while Jason disintegrated when the Upside Down merged with Hawkins. While the Demobats got Eddie, and technically they are a part of Vecna’s hivemind, Vecna himself did not kill anyone. Although he did kill three people in the first volume of the season, and his family, so it’s not like he was benevolent.

Hopefully, because the fifth season of Stranger Things is set to be the last, we’ll see some actual main characters die. Although, please — Duffer Brothers if you are reading this — please let Steve Harrington survive.

The entirety of Stranger Things season four is now available to stream on Netflix.