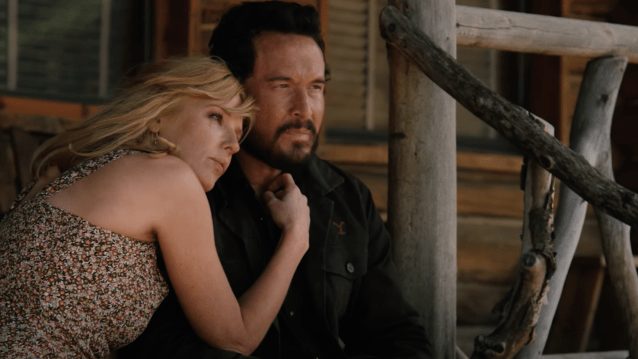 Yellowstone is billed as a western drama that follows the Dutton family through a constant and frustrating fight for control over the largest contiguous ranch in the United States. The Yellowstone Dutton Ranch is the shiny toy everyone wants to get their hands on, and with good reason. The land is beautiful and plentiful and serves as the backdrop for some of television’s best romances. Of course, you can’t talk about Yellowstone without mentioning the animals. From cutting horses to real wolves, they’re embracing the elements and using the series to highlight what life on a ranch is genuinely like.

Several of the characters in the series also have animalistic instincts, two of which are a fan-favorite couple, Rip Wheeler (Cole Hauser) and Beth Dutton (Kelly Reilly). From their heart-wrenching start to their continued beautiful journey, Rip and Beth bridge the gap between the tame and the untamed — the regulated and the wild. A love so raw and genuine can only exist between people who have experienced the most brutal lows and beautiful highs, and several of those moments were life experiences they shared. They met when they were still kids, did a lot of growing up together, and finally got a taste of a happily ever after.

The start of their star-crossed-lovers story

“I remember the first time I saw you, so wild, so angry, God you were beautiful,” Beth begins as she recalls meeting Rip. Wild and angry, words one could still use to describe him — beautiful, that one fits the bill, too.

What Beth brings out in Rip, what they could never have anticipated when they first met, is a sense of vulnerability. Rip was angry when Beth first met him; he’d witnessed something no one should ever have to experience, he’d done something no one should ever have to do, and he was thrust into this new life with this new family. Beth couldn’t have known Rip had just lost his mom and brother at the hands of his own father, much less that Rip had killed the man. Star-crossed lovers. If these two aren’t it, we argue that the term needs a new definition. The difference between the tragically beautiful romances that end early and those that somehow persevere is the grit and heart of those who dare to fall in love despite it all. Rip and Beth have the grit and the heart to push through the hard parts and revel in the good ones. And their good ones are so good.

Happily ever after wasn’t always so happy

With heavy hearts, they came together as kids who were as lost as they were angry, holding grudges against anyone with any semblance of a happy life. While they carried their own tragedies, they would slowly begin revealing them to one another. Beth also lost her mom at a young age, and she kept a secret about what happened that day for a long time. The two would slowly reveal their pain to one another, building a bond as they helped each other heal.

A profound tragedy still exists between them, and it’s one that Rip hasn’t been made aware of just yet. Speaking to TVLine last November, she told more about that secret and how Beth is terrified for it to come to light. Those who aren’t aware of the big secret, we’ll let you in on it. Beth was pregnant at a young age, and she was scared. It was Rip’s child, and instead of going to her dad for help, she turned to Jamie, who said he’d take care of the situation. He did just that, but he also altered the course of her life forever, a fault that does not rest on her shoulders.

Before bringing Beth into the fateful appointment that day, Jamie knew that an abortion also meant sterilization. Beth found that out later, and Rip is aware that she can’t have children, but… he’s not sure why.

“Rip also doesn’t know she was pregnant with his child. So she’s thinking a day might come when he might find out, or she will tell him. One would say she should tell him. I think the fear of potentially losing him from that is too great. She holds herself responsible, even though it was not her fault.”

Even in their wedded bliss, in the moments when Beth looks at Rip like he was placed on this very Earth for her (and let’s be honest, he totally was), she’s holding a heartbreaking secret. It’s interwoven into everything she does.

Despite their challenges and the things that dare to keep them apart, their connection is one of a kind, and it’s beautiful. Beth and Rip have always felt like coming home, like the end of a day when all you want is to see your person. They’ve felt safety with one another, like the one place in the world where they’re untouchable by hands that would bring them harm.

Be it on a blanket on the roof, tangled in bedsheets, or at a dinner table, their passion and dynamic is next level. It’s the kind of love you hope for, and it’s the kind of love you work for. Their road hasn’t been easy; Beth has pushed Rip away with all of her might. She’s hurt him on purpose to see if he’d go and stay away, but he’s always been right there. Rip has loved all versions of Beth Dutton, even those that hurt him, and he’s willing to drop everything and protect her.

One of the most romantic scenes in Yellowstone history, and across the pop culture realm, is the proposal between Rip and Beth. After a long day at work, Rip comes homes and chugs down a couple of beers before he talks to the woman he loves. She just so happens to be staring at him with stars in her eyes, slowly sipping a drink of her own. He doesn’t know it just yet, but his life is about to change, and the realization slowly sets in as she hands him a small black box.

As Wheeler opens the box, he realizes that he’s holding a ring in his hand, and the two giggle as they acknowledge that it’s not too flashy; Rip isn’t really a diamond and gold type. He quickly tells her he doesn’t need presents, and she stops him right there. This isn’t a present; it’s a promise.

“It means that you have me, that I’m yours. It means come live your life with me. Only thing I ask is that you outlive me so that I never have to live another day without you.”

It was a sweet gesture, a proposal done with no flare or dramatics, just Rip and Beth. The vulnerability she shows, and the humble way he feels like he doesn’t deserve her makes this one of the most romantic proposals in television history.

We’d like to talk with you later if you got through Rip and Beth’s wedding without shedding a tear. Yes, their love story is nothing if not unconventional. What made this wedding so special is that it was the raw, pure, almost primal need to be husband and wife, then and there.

Beth and Rip’s paths were destined to cross. Their lives led them to one another long before either of them made a decision to take the next step. While the urgency of their wedding is as multi-layered as their love story, it’s an honest and beautiful union between two people.

After the wedding, Beth reveals that she kidnapped the priest. Lloyd and Carter walk away, and the former explains what they’ve just witnessed, what Beth and Rip have. No one else has it, and no one can touch it.

What the future holds

What does the future hold for one of television’s best romances? Hopefully it’s all bliss, but, given that the wedding happened with an explosive season finale, we know it’s not all sunshine and rainbows. Beth is trying to uncover secrets, keep her family and their ranch together, and make some people play ball. Her methods aren’t always legal, and she’s done things that could get her into hot water. On the flip side, Rip is John Dutton’s right-hand man. If there’s trouble afoot, he’s going to be running (or riding) at it to protect their family. There’s also that secret looming over Beth’s head, one that would never make Rip stop loving her, but it might change the path of their lives where Jamie is concerned. That secret will, undoubtedly, still hurt Rip.

All that aside, we’re looking forward to the wild and untamed love they share in season five because happily ever after isn’t over with the wedding; it’s just beginning. After all the hurt and the trials along the way, they deserve some porch sitting and dancing on the ranch while everyone else sleeps, not knowing about the fire burning just outside their dreams.