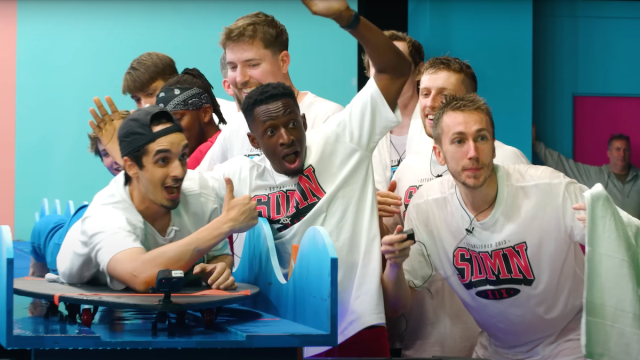 Recently the wildly popular YouTubers The Sidemen competed against the insanely famous YouTuber MrBeast and his crew in a $1,000,000 challenge. The two teams arranged to spar in a series of games — American Ninja-style — amid trash-talking, door-crashing, and good-natured ribbing. It was anybody’s game and in true Bro-style, the winners were just as sore as the losers. From trying to bust through doors. Because doors are solid wood. Never mind.

Who are the Sidemen?

In one corner, we’ve got the Sidemen – a team of misfits, smarties, and dummies. Their channel boasts over 138 million subscribers over the combined channels of their personalities, which consists of:

Who are Team Beast?

In the opposite corner are MrBeast’s team. MrBeast’s crew of tree-hugging, time-consuming childhood friends and one of the 10 highest-paid YouTubers of 2020 includes:

What were the individual challenges?

This video did not waste any time on introducing the players, thanking sponsors, or fanfare, they got right into it, and the first challenge was the Honeycomb Maze. The individual player is led to the honeycomb maze, inexplicably blinded, and has the blindfold ripped off as they enter. The object is to find the door that will open to the next cell and make it all the way through quickly without being stopped by the bees, who mostly just kind of grab at the players, find an arm or a hand and kind of hold on if they can. First through the maze is the Beast himself, Jimmy, and here are the stats:

In the Door Dash, two members from each team go against each other, racing through six sets of doors, four at a time. However, three of the doors are solid wood, and don’t open. One of the doors is seemingly styrofoam, so the player can just burst through. Chaos ensues when all of the other players see the breach, and must follow the player who has just smashed the fake door, and onto the next series. The star of the first round seemed to be Vik, prompting all players to start chanting, “follow Vik! follow Vik!” And here are the results:

Vik smashes the first door, the second door, Josh the third, and the fourth, Vik the fifth, and Chris won the round by smashing through the sixth and final door.

And round two was won by Nolan (Beast).

For the On Your Bike challenge, two members from each team must complete a course on tricycles. The first team to complete a whole lap wins. Chandler seemingly throws the first lap by staying behind to toss banana peels on the track. But his tactic worked and Nolan could not gain any ground from slipping on the peels. Being the pilot run, no one had anticipated how difficult — nay, impossible — it would be to approach the upper incline of the bridges, and eventually team members on the sidelines were forced to actually push the players up onto the bridge, with hilarious results, while Chandler continued to throw banana peels on the track. Some of the tricycles even broke, so by round two, we’ve got big wheel trikes, and the process is moving along much more smoothly. Beast takes round two.

Now, I’m not going to try to pretend to know what was happening in this challenge. It was utter chaos, I tell you. But it seems that you have a quarterback from Team A with no gear, attempting to score a touchdown against five players from Team B in football jersey-blinged samurai suits, and the team with the fastest total time wins. Here’s how it played out:

Josh’s final time was 22 seconds, but he got a 20 second penalty for not scoring a touchdown.

Out of the gate, Harry fumbles the pass, his final time was 35 seconds, but he receives a 20 second penalty and no touchdown.

Chandler’s time was 59 seconds, with a 20 second penalty.

The Sidemen take the challenge. At this point the overall score is 3-1, favoring Beast.

In the final round, all players must compete in the Slipway. The winning team takes the whole game. So, for all the marbles, the two teams line up for the Slipway. It’s not super-technical, but very stupid, and absolutely impossible. Each player must dive onto the board, and hopefully they’ve done so with enough gusto to send the board almost all the way to the end of the chute to have an arbitrary red line line up with a line on the board, but not far enough to land in the freezing-ass water. Making up the rules as we go along, if the player stops at some point in the chute, he just gets dunked, that’s it. Here’s what happened:

In a stunning play, the absolute finale to a riveting competition, Cameraman Tareq does the impossible, sticks the landing, and brings home the gold for Team Beast.