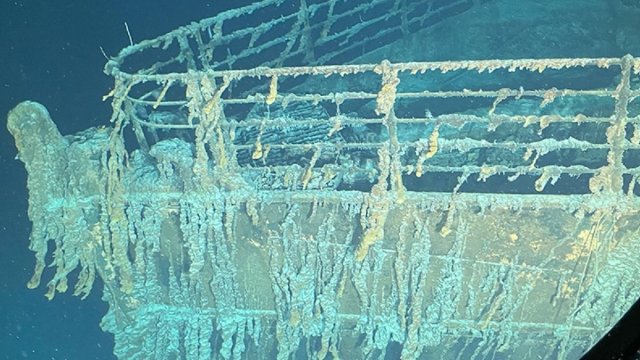 For the first time, the most famous shipwreck in modern history can be seen in all its eerie, haunting glory in stunning 8k resolution. Now historians are able to view details that had gone unseen for 110 years.

As reported by CNN, the clarity of the 8k resolution makes finer details finally visible, such as the name of the anchor maker, Noah Hingley & Sons Ltd, on the port side anchor. “I’ve been studying the wreck for decades and have completed multiple dives, and I can’t recall seeing any other image showing this level of detail,” said Rory Golden, OceanGate Expeditions Titanic expert and veteran Titanic diver, in a press release.

The footage was shared by the commercial expedition crew, OceanGate. The company pilots submersibles with a team of professionals consisting of historians, researchers, and dive experts. As a bonus, if you have an extra $250,000 lying around, you can join the expedition as a civilian “mission specialist.”

In essence, viewing the footage is taking a step through time itself. As has been documented numerous times, and brought to vivid detail in James Cameron’s Oscar-winning film, Titanic, the “unsinkable” ship was ripped open and plunged into the icy depths of the Atlantic in 1912. The luxury steamship sank in less than three hours, which gave the doomed passengers little time to prepare. Over a century later, some two miles below the water’s surface, what’s left at the bottom of the ocean is like a moment frozen in time.

Due to the depths and freezing temperatures, first-hand views of the wreckage are a rarity. What remains of the Titanic is slowly disappearing due to salt water corrosion and metal-eating bacteria, according to National Geographic. At some point, the ship will be completely lost to the ocean, which makes a chance to view it worth the exorbitant cost — for the ridiculously wealthy, that is.

One of the most famous maritime disasters of all time, the massive Titanic has become a ghost hidden beneath the waves of the Atlantic ocean. The legendary vessel struck an iceberg, causing catastrophic damage. As has been told many times before, the ship was woefully underprepared for such an emergency, having been deemed “unsinkable.” By the end, the death toll was estimated at 1,500, many of whom sank to the ocean depths with the ship. Whether or not human remains lie within the wreckage has been a matter of debate, though the 8k footage could lend clues to that answer.

The wreckage itself was hidden for 74 years before a team of scientists and researchers discovered the ship’s final resting place in 1985. In all, CNN noted, fewer people have made the journey to the Titanic than have been to space, which makes the $250k price tag to join the next round of expeditions in May a bit more understandable.