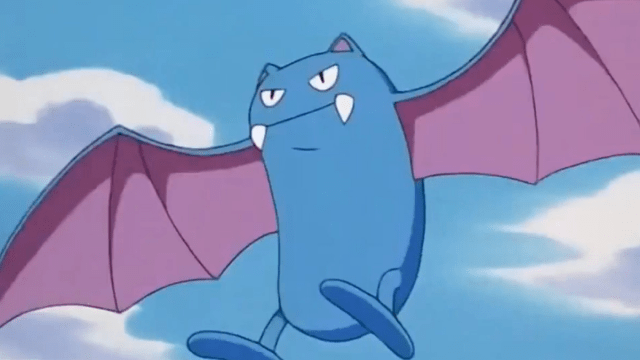 The Pokémon franchise is loved by millions worldwide and with over 900 Pokémon and counting, we’re bound to have favorites. Pokémon designs have taken inspiration from a multitude of sources; there’s Pokémon inspired by animals, nature, myths, food, and even common inanimate objects.

We’re going to look at our favorite bat-inspired Pokémon and rank them by in-game stats, design, and general vibes. There aren’t many bat Pokémon as of 2022 but with the upcoming release of Pokémon Scarlet and Pokémon Violet on November 18, we can only hope that some new bats will be added to the Pokédex.

There’s nothing inherently wrong with Zubat; in fact, it’s actually quite cute. But, when you’re trying to make your way through any cave or any route at night in the game, you’re inevitably going to be ambushed by Zubats. With attacks like Confuse Ray, your Pokémon will have a tough time fighting the little guys without inflicting damage to themselves first. None of its stats are amazing but its base Speed is 55, making early encounters with Zubat quite annoying if you picked a slower starter Pokémon.

Golbat is the second evolution of Zubat and almost nearly as prevalent in most games. You find Golbat in almost every higher-level cave in the Pokémon games and since it’s basically just a faster Zubat, it can be almost as annoying. Most of your enemies — think Team Rocket grunts — will also use Golbat so you better learn how to take it out quickly, because Confuse Ray and Bite can be frustrating to the most prepared trainer. Golbat ranks a little higher in this list because it can be a decent Poison/Flying type on any Pokémon team and it has some pretty creepy Pokédex entries about its love for blood.

Woobat is an adorable bat Pokémon first introduced in Pokémon Black and White. It can leave a heart mark on people with its nose and, according to its Pokédex entry, this mark is a sign of good fortune. Woobat has one of the cutest designs of all bat Pokémon and its design takes inspiration from the equally cute Honduran White Bat. While it’s definitely one of the cutest Pokémon on this list, its stats are very okay with speed being its best stat. It does have a solid moveset and its dual Psychic/Flying typing is an advantage so Woobat could still make a great addition to a Pokémon team.

If you combined a scorpion and a bat, the result would look something like Gligar. Its Pokédex entry calls it the FlyScorpion Pokémon which is an accurate description of the little critter. Gligar has high defense and a rare dual Ground/Flying typing which would make it a good choice as a battle partner. This flying scorpion doesn’t have many weaknesses, but watch out for Ice attacks as those will bring Gligar down pretty quick.

If you thought Woobat was cute, its evolution Swoobat might be even cuter. Swoobat retains the adorable heart-shaped nose but becomes even speedier when it evolves. Unfortunately, it doesn’t become all that much stronger, but it can still be a solid addition to a well-rounded team; who’s to say you can’t forego stats entirely and just keep it with you because it’s cute anyway? It evolves from high Friendship levels which seems on brand from such a wholesome Pokémon.

Gliscor is basically just a stronger and snazzier-looking Gligar; it has near-legendary defense and it’s speed and attack aren’t too shabby either. When it evolves, it becomes more of a vampire/scorpion hybrid and according to its Pokédex entries, it’s a big fan of draining the blood of its enemies. If this sounds like a catch to you, just make your Gligar hold a Razor Fang at night and it will evolve into Gliscor.

Lunala, Cosmog’s final evolution in Pokémon Moon, is a large, celestial bat with a moon motif. It’s definitely the most aesthetically pleasing Pokémon on this list and as a legendary, it’s also the strongest. The dual type Ghost/Psychic Pokémon has great stats and its signature move Moongeist Beam makes use of its strong special attack. It’s an incredible Pokémon but it feels a bit unfair to put a legendary, game-exclusive Pokémon too high on this list.

Noibat is another adorable addition to the list and is a dual type Dragon/Flying Pokémon. Dragon types are loved for a reason; these Pokémon are usually found later in the games and are generally strong and well-rounded for battling. While this Pokémon isn’t the strongest, it can learn some great moves and its echolocation concept is pretty cool. Noibat wins bonus points for being one of the cutest bats in the franchise.

Noivern is the evolved form of Noibat and what it loses in cuteness, it makes up for in ability. This is one fast Pokémon; its base speed is 123 and like most Dragon-types, its other stats aren’t far behind. Noivern, like many of the bats on this list, has some creepy Pokédex entries (the obsession with blood continues) so this is not a Pokémon you want as an enemy. However, if you befriend one, you’ll have one of the coolest bat Pokémon on your team.

We know what you’re thinking — we put Zubat and Golbat dead last in this list — but Crobat is special. If you raise a Zubat with love and care, you will eventually be rewarded with its final evolution and arguably the best bat Pokémon in the franchise. It takes a lot of effort to get a Crobat; Golbat will only evolve into the four-winged Pokémon with high Friendship levels, but the effort is worth it. Crobat not only has a much cooler design than its predecessors, it has much better stats. Its speed is almost as high as some legendaries and it can learn good moves; Crobat can even learn Fly and it’s fun to imagine how the tiny creature could transport a trainer from city to city. It might not be the strongest or even the coolest-looking Pokémon on this list, but Crobat’s evolution is inspiring.