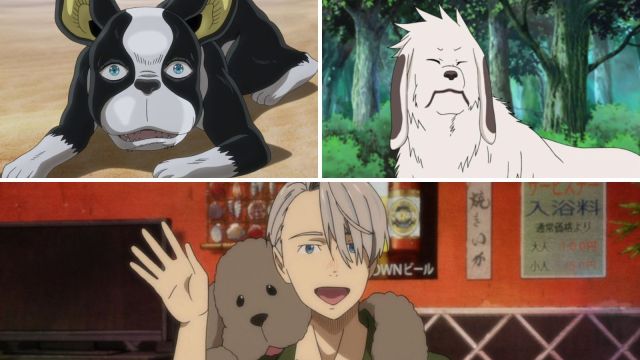 Every dog is a good dog, but at times, the hard decision to rank those dogs comes around. Known to be man’s best friend, dogs are also anime characters’ trusty and faithful companions, handing them a helping paw and a few barks of encouragement if needed. Some dogs, more than others, also help with a little more than heartening motivation, using their own teeth and claws to defend their beloved owners. On a related note, here are (some) of the best dogs in anime.

The faithful companion of Sato is Kedama, a 9-month-old Pomeranian puppy who keeps Sato company since he is oftentime home alone. Kedama is a cheerful and sweet pup, who happily greets everyone visiting Mafuyu’s place. Absolutely adorable and the perfect fluffy friend for the vocalist of Given, Kedama is even Sato’s wallpaper on his phone, showing his love for the beloved pooch.

Menchi lives in constant fear of finally becoming Excel’s emergency food supply. This adorable yet fearful pup has a strained relationship with her owner and does try to run away from Excel in every single episode. With a translator narrating Menchi’s thoughts — which are filled with distress and desperation — every episode ends with Menchi’s song of despair. Needless to say, she never manages to escape.

Granted, Cezar is a zombie, but consider the fact that he’s been through a lot. Missing an eye and a leg, Cezar is a very unlucky pup who did not meet the kindest fate while alive but now has finally met his loving owner as a zombie. Only appearing during Season 2, Cezar quickly becomes a source of wholesomeness for the audience, especially considering Hectors’ loving and affectionate actions towards his forever friend.

This absolutely adorable toy poodle belongs to the one and only Victor Nikiforov from Yuri!! On Ice. Standing by his owner through thick and thin, Makkachin is a loyal companion to the five-time World Champion winner, accompanying him through all of his endeavors, including his constant trips from Japan to Russia. The devotion between the pair isn’t at all one-sided considering Victor’s constant concern and affection for Makkachin, who has accompanied him for over a decade. Victor even took a break from skating with the intent to spend Makkachin’s last years together. If that isn’t devotion, nothing is.

To call Mike a dog may be… a slight exaggeration. Weighing nearly 900 pounds, Mike is the guard hound of the Zoldyck family. Considering this family of assassins lives in a remote mountain, they certainly need a pooch who can handle wandering tourists, proving Mike to be certainly fit for the job due to his massive size and appetite to match. In spite of his threatening aura and machine-like actions, Mike does obey the Zoldycks and is still loyal to the one command he was given years ago: to kill all intruders.

Still on the note of large and gigantic dogs, Sadaharu, the endearing mascot of the Yorozuya clan, weighs over 600 pounds. This pup was initially a God who was meant to defend and protect the Dragon’s Lair, but after becoming jobless, the Yorozuya took him in as part of their clan. Although always willing to give out a helpful paw and bite off a head or two, Sadaharu became more of a mascot over time, being oftentimes taken on a walk by Gintoki, and taken care of by Kagura who very much appreciates his destructive and stubborn attitude.

Part of Kakashi’s ninken (or ninja dogs), Pakkun is a miniature pug with lots of attitude and quirks. Behaving like an old man —and even calling himself such — Pakkun has a very lazy and sluggish demeanor, with a raspy and low voice to complete his antiquated antics. Although this pup is indeed a bit passive at times, in reality, he is rather loyal and fierce, even cursing himself for not being as helpful or involved in fights. In spite of his insecurities, Pakkun still has a keen sense of smell which proves to be incredibly dependable time and time again.

Named after his owner, Tetsuya is a cute pooch who can’t help but develop a liking for basketball. At times affectionally called #2 by Kuroko, Tetsuya is taken care of by the entire Seirin team, to the point of becoming the unofficial mascot for the group. This dog is just like any regular puppy that has a lot of energy — he barks, pees, and plays a lot. Sporting a No.16 basketball jersey, this pup certainly enjoys any ball games with his owners, to the point where he even cheers and celebrates whenever the team scores during a game, thus becoming the best and cutest cheerleader anyone could’ve asked for.

With a tearful backstory and a bright future ahead, Chouchou is the faithful pup of One Piece. Although his presence in the anime is rather short-lived, Chouchou’s impact will never go unnoticed and the unwavering loyalty this pup shows towards his already deceased owner is ultimately what makes him such a good pup. After his owner’s passing, Chouchou never forgot the one promise he made his owner, which was to look after the pet food shop in Orange Town — and that’s exactly what he did. Surviving multiple attacks from opponents, Chouchou still defends and protects the cherished memory left behind by his owner, even putting his own life on the line for it, showing exactly how strong this friendly mutt can be.

Known for his appetite and for “eating with a lot of gusto,” hence the name, Guts is a goofy-looking pug from the Mankanshoku family. This family pet is absolutely adorable and the focal point of his story — other than being adorable — is his insatiable hunger and love for food. Guts also has a few quirks of his own; being able to stand on his hinder legs, just like a human, as well as having particular interest and affection for Ryuko, the main protagonist. In spite of his huggable exterior, his nature is not as pure. He is a mischievous dog that often steals food if he catches someone distracted.

Everyone knows Growlithe, but many people don’t associate them with being dogs, even if they are canines. With a peculiar appearance, especially for a hound, Growlithe is a fire-type puppy Pokémon with unfaltering loyalty to those they care about. In the Pokémon anime, “Growlie,” — a Growlithe — is introduced as Team Rocket grunt James’ puppy when he was a child, but whom he left behind after running away from home. Although James left a long time ago, Growlie shows Growlithe’s true nature and remains loyal to his previous owner.

Riza Hawkeye’s best friend and naughty companion, Black Hayate is a Shiba Inu puppy that was found on the street by one of Riza’s comrades. After deeming everyone unfit to care for this puppy, Riza takes him in, and through a handful of misbehaving situations, the pair ended up finding a middle ground and learning each other’s antics and quirks. Under Hawkeye’s discipline, Black Hayate starts learning several tricks and slowly changes his unruly behavior as time goes by, even if he likes to bury his bones near the Warehouses.

A ninken (again, dog ninja) and also part of the Konohagakure’s Inuzuka clan, Akamaru is the bundle of joy keeping Inuzuka company. Devoted and active as a pup, Akamaru loved typical dog activities throughout the anime, like going for walks and running through the trees. As he gets older, everyone gets to meet this pooch’s thought process, showcasing exactly how thoughtful, rational, and humorous he really is. In this pup’s old age, Akamaru is oftentimes seen taking naps around the house and playing with his offspring.

One of the most intelligent pups in anime is Ein, a Pembroke Welsh Corgi with a wise and friendly snout. Also known as a data dog, Ein underwent an unknown procedure to enhance his intelligence, thus making him an essential element in the Bebop crew. Facing a number of challenges and a past that hasn’t been so kind to the pup, Ein found his companions at last and happily took part in their exciting adventures. Ein’s intelligence goes well beyond just rationale; he can also physically drive a car with his tiny Corgi paws, answer telephones, and even hack computer databases using his mind alone.

Iggy is a mutt who was found on the streets of New York and he’s anything but a normal dog. Anthropomorphic and cartoon-looking, this pup with a unique exterior has a lot of…personality. Joining the Joestar group in their expedition to Cairo and aiming to defeat Dio, Iggy’s personality immediately shines through. He is a rude, narcissistic, and anti-social dog, who enjoys causing mayhem and disrespecting humans. In typical Jojo’s fashion, by creating havoc, he helps the Joestar group in the most unexpected ways. The uniqueness of this dog paired with his strong will may be uncommon for the average pooch but he really is the personification of dependable.

From large murderous mutts to adorable domestic Pomeranians, anime dogs come in all shapes and sizes. Thankfully, our favorite protagonists are lucky enough to have these pups beside them, keeping them company when it’s most needed.