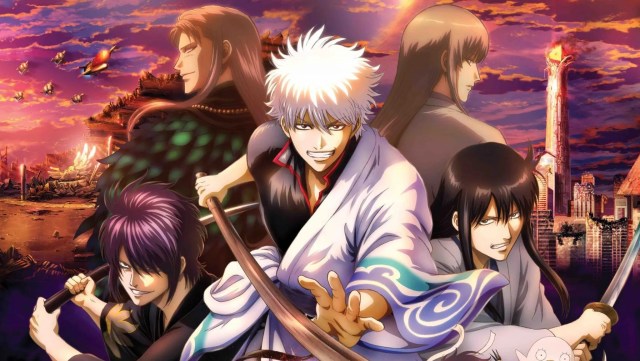 Gintama is set in an alternate reality during the Edo period in Japan, where a powerful alien race called the Amanto has invaded Earth. While Japan’s mightiest samurais try to defend the planet, the cowardly shogun surrenders and forces the citizens to turn over their samurai swords.

Gintoki Sakata, meanwhile, is a jack-of-all-trades kind of guy who works odd jobs to pay the bills. After rescuing Shinpachi Shimura’s sister, who was about to be handed over to an alien brothel, they team up and rescue a super-powered alien girl named Kagura from the Yakuza. The trio of misfits open a business helping people, making friends and enemies along the road.

The popular anime Gintama ran from 2006-2018, spanning across 367 episodes and three films. Despite the alternate reality setting, Gintama is more realistic than most anime concerning fight sequences, allowing for mistakes and chance to change the victor on the battlefield. While most anime protagonists are the most powerful fighters in their world, that isn’t the case with Gintoki. But who is the most powerful? Read further to find out.

When Hedoro first arrived on the scene, he was terrifying, with monster-like features and unbelievably powerful. An Amanto from the Dakini Tribe, Hedoro had godlike strength before being taken down by a flower. Now peaceful, he opened a flower shop on Earth.

Katsura is unassumingly powerful because people assume he’s stupid, but can amass followers because he is so charismatic. Like others in the anime, he’s highly skilled at swordsmanship, but cannot be rivaled by his bomb-making abilities. His is a master of disguise and can battle people using food.

The main female protagonist of Gintama is Kagura, a member of the Yato Tribe and daughter of Umibozu. She is a master at hand-to-hand combat and can catch bullets with her bare hands and mouth. When angry, she is extremely powerful and goes into a blind rage, which she tries to control in fear of it consuming her.

Known as the most powerful assassin in Tenshouin Naraku branch, Oboro is cool, calm and collected, making him a uniquely terrifying villain. He is a master of hand-to-hand combat, with cat-like speed and reflexes, and can use meditation to power himself up. He is also a powerful swordsman and has mastered the use of poisoned needles.

The main antagonist of Gintama before Utsuro entered the picture, Takasugi is the leader of the extremist faction Kiheitai. Takasugi is extremely strong and fast, delivering countless blows in a matter of seconds. He is also a powerful swordsman and knife-wielder, making him one of the most powerful humans in the series.

The commander of the 7th Division of the Harusame Space Pirates, Housen and Umibozu are equal in strength, having fought for three days straight without a victor. What sets Housen apart though, is his because he has no loved ones, nor does he care about anyone or anything but power.

Housen is a skilled fighter – fast and deadly – can catch bullets with his bare hand, and is a master of persuasion and manipulation. A member of the Yato Tribe, Housen possesses incredible strength, but is weakened in direct sunlight, which is eventually his downfall.

The son of Umibozu and brother to Kagura, making him a member of the Yato Tribe, Kamui was once very protective of his family, but grew bitter as his mother’s health deteriorated and his father was never around. He blamed himself and his father for his mother’s death and decided to use his power as a Yato Tribesman to become more powerful than his father, so he could kill him. When he finally got the opportunity though, he and his father made amends. Despite his extreme anger, he holds a soft spot for women, refusing to kill them.

Kamui is one of the main antagonists of Gintama and is known as the Lightning Spear of the 7th Division of the Harusame Space Pirates. He is extremely strong, with the ability to shove his fist into the chest of his opponents and an expert at hand-to-hand combat. He has immense speed and endurance, with the ability to take on several opponents simultaneously. He also has the ability to alter his age.

Umibozu is the most skilled alien hunter in the universe and is as powerful as Housen, but unlike Housen, Umibozu has a family he cares about. Like other members of the Yato Tribe, he is weak to sunlight. Umibozu is the only member of the tribe to refuse to bow down to Housen, who declared himself the King of the Night. Among his clansmen, only Housen and Kamui come close to his fighting capabilities and strength.

Despite his power, Umibozu has a soft spot for his family and fears physically harming them, so he chooses to stay away from them for great lengths of time. He also searched for years for a way to cure his wife of her rare health condition.

Underneath his exterior as a deadbeat loser, Gintoki is actually a skilled samurai whose battlefield exploits are the story of legends, earning him the nickname Shiroyasha, meaning “white devil.”

Gintoki is sadistic, which is unusual for a protagonist, but makes sense in his story. He is strong, fast and an expert swordsman. Because is his unique skills, he’s not someone to mess with – or he’ll stab you with his wooden sword.

Yoshida Shouyou was born with the ability to absorb energy from Earth, making him immortal. Throughout time people feared him because of his immortality and tried countless ways to kill him, which drove him insane.

Although he is the main antagonist of Gintama, the character wants nothing more than to finally be rid of his immortality. He is a master in hand-to-hand combat and swordsmanship, has great strength, speed and fast reflexes, but his greatest strength is his intelligence.