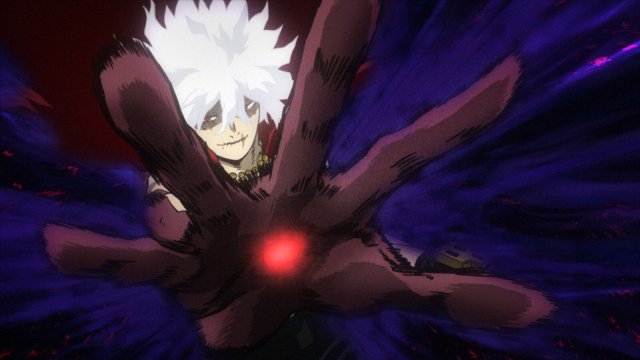 Warning: the following article contains spoilers for the My Hero Academia manga.

My Hero Academia‘s sixth season is still a quarter of the way through, but the stakes have just increased, as the series’ overarching villain is set loose once more.

Finally awake from his four-month induced sleep state, Tomura Shigaraki immediately sets out to destroy the world by activating his Decay Quirk, which deals immense damage to everything around him. The hunger for destruction is not all that motivates the villain now, though. In the sixth episode of season six, we see the vestige of All for One’s previous holder manifesting its will in Shigaraki’s mind, prompting him to acquire One for All. As we know, this has always been All for One’s greatest desire, since One for All is the only Quirk the villain has never been able to steal.

With a more resilient body and in possession of every Quirk previously stolen by All for One, Shigaraki is now more powerful than All for One, and a formidable opponent to the heroes. Despite this, acquiring One for All forcefully is no easy task, which raises the question of whether the villain will ever achieve this or not. Warning: spoilers ahead.

Can Shigaraki steal One for All?

When transferring this power to Shigaraki, All for One wholeheartedly believed that his disciple could surpass him, and would be able to finally steal One for All. However, one must remember that Shigaraki’s transformation was interrupted by Mirko and Present Mic, who shatter the capsule containing his body. Because of this, Dr. Kyudai’s procedure is not completed, and Shigaraki’s modification ends up at only 75 percent, which leads to future consequences for the villain.

Later in the story, Shigaraki makes a valiant attempt at stealing One for All from Deku but is unsuccessful. As previously established, One for All has a natural defense mechanism against All for One, since it only transfers from person to person if the current holder wills it to happen. This means that when the moment comes for Shigaraki to steal the Quirk, he has to battle against Deku’s will, as well as the will of One for All’s previous wielders, whose vestiges remain inside the Quirk. With his body not yet fully adapted to All for One, and at 75 percent capacity, the villain is unable to steal Deku’s power.

This isn’t to say that One for All will never be stolen — the villains are very insistent and can get creative in their attempts — but it has not happened as of now.

My Hero Academia‘s sixth season has a lot more in store, so don’t miss out on any new episodes. The anime is available for streaming on Crunchyroll and Hulu.