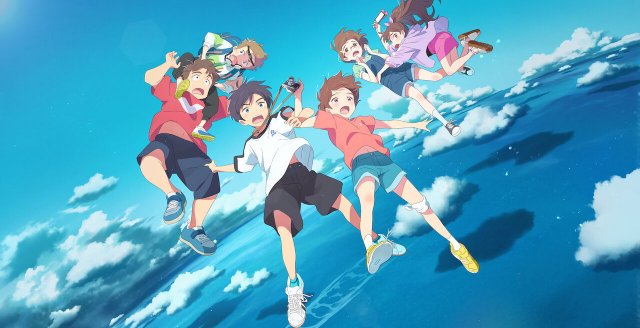 Drifting Home is the name of Netflix’s latest anime movie, and it’s available for streaming on the platform right now. Directed by Hiroyasi Ishida, the movie follows the story of a group of friends during summer break, as they are transported from the safety of the world they know to an underwater wonderland. In an amazing journey, these friends must now find a way to make it back home, which proves to be no easy task.

If you’re interested in watching Drifting Home, you’ll be pleased to know you can choose to stream it in English or in Japanese (with subtitles included, of course). Those who already watched it, though, may have found some of the voices in the English cast very familiar, and they’d be right to feel that way, as the cast is composed of some incredibly well-known voices. In case you can’t quite place where you recognize these voices from, here’s a list of Drifting Home‘s main voice cast, as well as some of their popular works.

Papenbrook began his voice acting career in 2000, playing a younger version of Vash the Stampede, in the Trigun anime series, but that’s far from being his best-known role. During his career, the actor would make a name for himself as the voice of Eren Jaeger in Attack on Titan, Yo Shindo in My Hero Academia, Inosuke Hashibira in Demon Slayer, Shigehiro Ogiwara in Kuroko’s Basketball, and very recently, Julio in Cyberpunk: Edegerunners. Despite starting his career in the anime scene, Papenbrook also voiced some cartoon characters over the years, and currently, his biggest work is in Miraculous: Tales of Ladybug & Cat Noir, where he plays Adrien Agreste/Cat Noir.

This American voice actress started her career in 2005 with Magical Doremi, where she voiced Melissa. Over the years, Cassandra Morris would go on to accumulate a vast number of roles under her belt, from anime, cartoons, and movies, to video games. Some of her best-known works include Taiga Aisaka in Toradora!, Saki Mikajima in Durarara!!, Anastasia Hoshin in Re:Zero − Starting Life in Another World, Calaveras and Cere-Cere in Sailor Moon, and Sue in Doraemon. Regarding her cartoon work, you might also recognize Morris’ voice in Amphibia as Leif, Barbie Dreamhouse Adventures as Stacie Roberts, and Winx Club as Diaspro and Chimera.

Elliot Fletcher’s career started in 2006 as a voice actor, however, life would later take him down a different path and to the front of the cameras. You might know this actor from successful TV show roles like Max from Marvel’s Runaways, Noah in Faking It, Trevor in Shameless, Aaron in The Fosters, and Sam Jordan in Y: The Last Man. In the world of animation, Fletcher’s roles are fewer, having voiced Shiro from Tekkonkinkreet, and Pelagos from World of Warcraft: Shadowlands. If you’re a fan of documentaries, you can also watch this actor in Disclosure: Trans Lives on Screen.

Ben Diskin has been active in the acting world since 1987, making appearances in live-action movies, TV shows, and of course, voicing characters in some of the most popular anime, cartoons, and video games out there. Some of the entries on his voice-acting repertoire include the role of Miyagawa in Mob Psycho 100, Hahn in Avatar: The Last Airbender, Joseph Joestar in JoJo’s Bizarre Adventure, Sai Yamanaka and Urashiki Ōtsutsuki in Boruto: Naruto Next Generations, Venom and Eddie Brock in The Spectacular Spider-Man, AZI-3 in Star Wars: The Bad Batch, Daiki Aomine in Kuroko’s Basketball, and Slush in Bleach: Hell Verse.

Alex Cazares’ voice-acting career took off in 2012, with her first role being Lily/Glitter Peace from Glitter Force. Later, the actress would become known for her work in projects like Naruto Shippuden, as Asura Otsutsuki, Boruto: Naruto Next Generations, as Suika Kannonji and Shin Uchiha, The Boss Baby: Back in Business, as Staci, Rent-A-Girlfriend, as Nagomi Kinoshita, and Twin Star Exorcists, as Chibita. Recently, Cazares also participated in Netflix’s Cyberpunk: Edgerunners, giving voice to Rebecca. However, Cazares’ work isn’t limited to anime and cartoons, as she’s also done some good work lending her voice to characters like Dagr from Fire Emblem Heroes, and Lulu from WarioWare Gold and WarioWare: Get It Together.

Unlike other voice actors in this list — despite her American roots — Abby Trott began her career in Japan, lending her voice to puppets. However, it was only when she moved back to the U.S. that work really took off for this actress. In anime, Trott has voiced characters like Nezuko Kamado in Demon Slayer, Riko Aida in Kuroko’s Basketball, Machi in Hunter x Hunter, Ichi Mezato in Mob Psycho 100, Lipia Zancale in Sword Art Online: Alicization, and Hikari Horaki in Neon Genesis Evangelion. As for cartoons, some of her most popular projects include voicing Windblade in the Transformers franchise and Ellie Sattler in Animaniacs.

While Cherami Leigh’s acting career started early on in life with appearances in TV shows and movies, she wouldn’t start working as a voice actor until 2007. In this field, some of Leigh’s most popular works are in Fairy Tail, as Lucy Heartfilia, Black Butler, as Elizabeth Midford, Blue Exorcist, as Yuri Egin, Psycho-Pass, as Mika Shimotsuki, Beastars, as Mizuchi, Fruits Basket, as Kimi Toudou, Ouran High School Host Club, as Kirimi Nekozawa, Persona 5: The Animation, as Makoto Niijima, and in One Piece, as Carol Masterson, Aisa, and Miss Goldenweek.

Active since 1986, John DiMaggio is best known for his voice acting work in popular cartoons, including roles like Jake the Dog in Adventure Time, Fu Dog in American Dragon: Jake Long, Dr. Drakken in Kim Possible, Blackjack in SpongeBob SquarePants, Aquaman in Batman: The Brave and the Bold, Bender in Futurama, as well as Manly Dan, Love God, and Harry Claymore in Gravity Falls.

At long last, you can stop racking your brain trying to place these voices, and just enjoy Drifting Home. Now that you know the English voice cast for this movie, feel free to also check out their other works; although surely you must already be familiar with some of the anime and cartoons presented here.