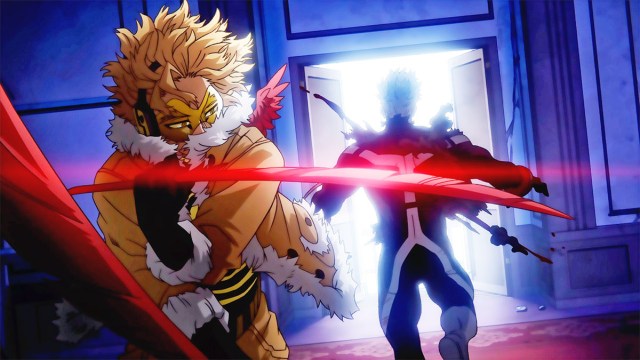 Warning: the following article contains major spoilers for My Hero Academia season six, episode three, as well as for chapter 341 of the manga.

My Hero Academia‘s sixth season is proving to be one of the most ruthless to date, with episode three, “One’s Justice,” already earning its place as the best episode of the season. Of course, with 22 episodes still awaiting release, this could change, but we argue that it’ll be a tough one to beat.

The war between heroes and villains is at its beginning stages, and like in any other war, wins and losses are to be expected. In the anime’s latest episode a major and highly anticipated confrontation took place, leaving viewers to wonder about a certain character’s current vital status. Beware, though, spoilers to follow.

In “One’s Justice”, My Hero Academia pulled the rug from under the audience’s feet by killing a beloved villain. Granted, the foreshadowing for a confrontation was there in the build-up of Hawks’ relationships with Twice, but it was still a shock for those who haven’t read the manga. Being someone who likes to trust others made Twice an easy target for Hawks to exploit and gather information from, which made this betrayal that much more painful, although predictable.

Make no mistake, it’s clear that Hawks grew fond of Twice during his time undercover as part of the Paranormal Liberation Front, but when duty called, emotion couldn’t take part, and the hero did what he had to. No matter how much Hawks would have liked to simply arrest Twice, the latter’s Quirk was too much of a threat to the heroes, and the villain’s will to stand his ground in order to protect his friends didn’t help matters.

After a painful confrontation where Twice reflects on his life and questions the heroes’ holier-than-thou attitude, Dabi comes to Twice’s rescue, but it’s not enough. Hawks manages to evade Dabi’s attacks and decides he has to end Twice’s life if there’s any hope for the heroes to win. When Twice tries to run out to help his struggling friends, Hawks comes from behind to deal the final blow, a literal stab in the back.

While we don’t see the killing happen on screen nor Twice’s dead body, the image of bloodied hair and blood running down one of the floors of the building are enough to paint the picture. In his final moments, Twice gathers his remaining strength to create one last clone of himself who saves Himiko Toga and Mr. Compress, allowing him to say goodbye to his dear friend. In one of My Hero Academia‘s most emotional scenes to date, the villain gives Toga her handkerchief back and declares he lived happily surrounded by his friends, despite his many failures. At last, the clone melts to the floor embraced in Toga’s arms, marking Twice’s death.

Will Twice return to My Hero Academia?

It’s impossible to say for sure if we’ll see this villain come back to the story, but the door is still open for a return of sorts. In chapter 341 of the manga, Dabi gives Toga a vial with Twice’s blood in it, leaving readers to ponder over the gesture’s significance to the plot. As we know, Toga’s Quirk allows her to transform into someone else, as long as she drinks that person’s blood first. If the blood is from someone Toga holds dear, she can even use that person’s Quirk, as we’ve seen her do with Ochaco Uraraka during the Meta Liberation Army arc. While Toga is prone to romantic infatuations, one could argue that her friendship with Twice was the strongest bond Toga ever had, since it was based on mutual affection, instead of being one more of Toga’s one-sided obsessions.

Taking this into account, there’s a high chance that Toga might use Twice’s blood to the villains’ advantage by transforming into her dead friend and using his Quirk. Twice’s ability to create an army of clones is a very useful one, giving the villains the opportunity to overwhelm their opponents by sheer numbers. Unfortunately, this will be a mere impersonation of Twice, but plenty of fans will still be happy seeing Toga’s take on their favorite villain. Additionally, this will be sure to give us some more insight into the duo’s friendship, which is always appreciated.

My Hero Academia‘s sixth season will continue airing on Crunchyroll, with new episodes being released on the platform every Saturday.