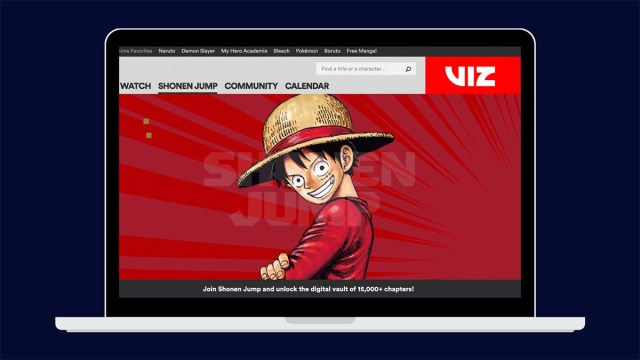 In the past decade, the increase of digital manga has been exponentially growing. More and more people overseas have been trying to access their favorite comics published in Japan and Korea. With the rising amount of online publishers, that access has become easier than ever. Previously with medium only accessible through physical copies in Japan, manga has now been hitting shelves all over the world, and to guarantee even more accessibility, there are thousands of websites and apps containing manga — both legally and illegally.

Korean manhwas and webtoons are far more accessible mediums to find online, and more often than not, a digital copy comes out way before the physical one. On that note, here are the best, legal, manga reading websites and apps to completely satiate your need for content at the touch of your fingertips.

One of the biggest Shonen manga publishers is VIZ Shonen Jump. With a subscription of only $1.99 a month, any reader will be able to access the most popular Shonen manga at the time, including One Piece, My Hero Academia, Jujutsu Kaisen, Demon Slayer, and many other big titles. Due to its cheap monthly subscription, this is one of the best websites to read manga on, considering their massive repertoire as well as their official and timely translations.

Comixology is Amazon’s extension for reading manga. With a separate membership to read manga, Comixology offers a wide variety of titles from romance to Shonen and Josei. With Comixology unlimited, anyone can access titles from the two biggest publishers, including VIZ and Kodansha, and popular series like Attack on Titan and Vinland Saga. However, it does have a few downsides; some series are only partially unlocked, leaving a few volumes and even arcs needing to be paid separately, and it also doesn’t couple with Kindle Unlimited just yet.

For $4.99 a month, anyone can access INKR’s extensive library. With large publishing names like Kodansha and Tokyopop, INKR has a huge variety of titles in its repertoire, including manga, manhwa, webtoons, and comics. From Shonen to Shojo, the INKR app offers great alternatives for anyone looking to read diverse genres in manga and manhwa. This website also offers quite a few free manga available to everyone, and even a number of free chapters per manhwa, allowing everyone to read a portion of the content before committing to the entire story.

With a bit of a tricky subscription, Lezhin is possibly one of the best sources for anything manhwa-related. While one can purchase individual chapters or the full released manhwa, Lezhin does have a few subscription plans that range from $9.99 a month to a $69.99 one-time deal, which offers a limited number of coins that are used to unlock chapters. Although it may be pricier than online manga publishers, Lezhin does offer a huge library with an enormous variety of genres, including historical and romance manhwa, and the most popular genre, Boys Love. US users can also easily get free coins by watching ads, playing games, and downloading apps. However, this feature has proven to be faulty for anyone outside of Asia or the United States. As for explicit content, Lezhin has a browser extension called “Lezhinu,” which is used to publish R-rated content and is only accessible to older audiences.

For a completely free and legal website, Mangaplus really does come through for anyone looking to save their pennies and unlock a new chapter without a ridiculous charge. Owned by Shueisha, a Japanese publishing company, Mangaplus includes titles like Chainsaw Man, One Piece, Spy x Family, and Dragon Ball, and all these series are completely free to read with official English translations. Although it does contain huge titles as previously mentioned, a lot of its repertoire is also based on smaller manga containing several genres, although not as diverse as previous entries on this list. The only catch, other than the smaller library, is having to wait a little longer for the publications. But, honestly, that’s just a small price to pay for having completely free and legal readings ahead.

Another completely free and legal source, this time for manhwa, is the app Webtoon. Containing a huge library of titles, Webtoon is a completely free app, only requiring the user to watch a few ads to get a large number of free coins that can be used to unlock chapters. With an easy and accessible interface, anyone can store an immense number of coins and read the lengthiest manhwa without paying a penny. Containing the most popular themes, a large collection of diverse tropes can be found, including romance, historical, fantasy stories, and popular manhwa titles such as True Beauty and SubZero.

For a legal, lengthy library of romance content, Renta! is a great choice. This website has hundreds of manga available, including several genres. However, it is mostly known for its extensive library of the popular genre that is Boys Love, including explicit and non-explicit content. All the manga is accessible through the exchange of points, which can be purchased on their website, or by purchasing all the volumes or chapters of a manga. Users can also access premium membership by spending $100 dollars over the course of a three-month period. This membership will guarantee 2% of their earnings will be returned as points, which they can use to unlock even more manga.

Mostly containing Chinese Manhua and webtoons, Bilibili Comics offers a free and wide range of comics in their library. Available on their app, or their website, Bilibili Comics has some of the most popular genres attached to their name, including fantasy, historical, romance, and Harem stories; Bilibili appeals to anyone looking for lengthy webtoons with great art and complex stories, all for free from completely legal sources. With daily chapters released, it is recommended that you make an account to keep track of all the titles available as the system updates every single day with new content.

Another great source for Boys Love fans is Futekiya. With a huge library and a subscription plan of $6.99 a month, users can access the entire library at the touch of their fingertips. Only in website format, Futekiya also holds several promotions including a $1.99 “all you can read” plan, where readers can access numerous titles for free over the course of a week. Popular BL manga can be found on this platform, including names like Blue Sky Complex, Pink Heart Jam, and MODS, all of them with an additional warning for titles that may contain explicit content.

With all these trustworthy websites at your disposal, a whole world of manga awaits. Whether it may be a webtoon, manga, or a manhua, one will certainly find everything they wish for in any of these platforms, and swiftly keep up-to-date with their favorite manga.