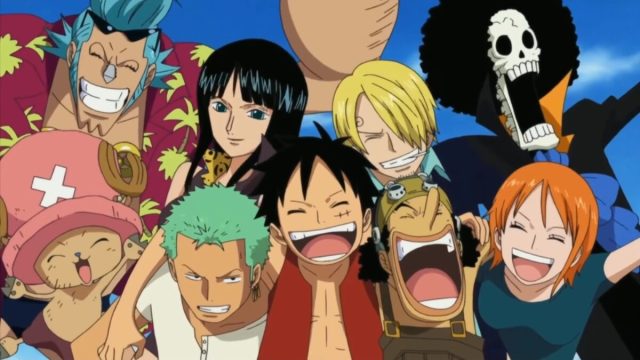 What would One Piece be without its eccentric band of sailors? Eiichiro Oda’s world-famous manga collection has been running since 1997, but the franchise truly skyrocketed to universal success with its Japanese animated series of the same name, which started airing in 1999. One Piece follows Monkey D. Luffy, the founder of the Straw Hat Pirates who scours the seven seas in search of the “One Piece” treasure to become the next King of the Pirates.

Without his own crew — the lovable misfits known as the Straw Hat Pirates — it would be near impossible for Luffy to achieve his dreams. Inspired by his childhood idol, Shanks, he begins to assemble an entourage and acquires a ship, which Luffy deems the “Going Merry.” Somewhere along the line, Luffy eats a Devil Fruit and obtains the physical properties of rubber, allowing him to stretch his limbs à la Mr. Fantastic. But even Luffy — with all his promising traits — needs the support of trustworthy and determined teammates. Hence, the Straw Hat Pirates were born, but how did the dream team come to fruition?

Originally introduced as an antagonist in the anime, Nico Robin becomes the seventh member of the Straw Hat Pirates and a breakout character in the franchise. Acting as a talented historian and archeologist, Robin is a Devil Fruit user with the ability to replicate her limbs and the only known person capable of reading the ancient stones called Poneglyphs. With a bounty on her head, Nico Robin becomes a fugitive and hides out with Sir Crocodile’s Baroque Works group, eventually becoming the vice president.

When Robin encounters the Straw Hat Pirates, long after the Baroque Works have disbanded, she tags along with them, eventually learning to trust them. When the government comes knocking on their door, Nico surrenders herself to save the Straw Hats, which leads them to declare her an honorary member.

Early conceptual designs appointed Nami as the only female member of the Straw Hats until Nico Robin came along. Nami officially joins the Straw Hats after the defeat of her superior Arlong, who had kidnapped and enslaved her after discovering her cartography talent. In return, Arlon promised to free her village for a price, so Nami was forced from others to pay off the debt.

When freed from mindless subservience, Nami retires from pickpocketing and becomes the Straw Hat’s navigator to fulfil her life-long dream of mapping out the Grand Line. Despite initial apprehension, Nami grows to trust and admire the Straw Hats. Able to use a three-sectioned staff to produce weather-based attacks, Nami masters the Clima-Tact, an ability that allows her to manipulate the climate.

Originally a member of the music-themed Rumbar Pirates, Brook took over after the crew lost their captain, Calico. Some time later, the Rumbar Pirates are wiped out, but a Revive-Revive Fruit allowed “Dead Bones” Brook to resurrect from the grave as a musically-inclined skeleton with a knack for the violin. Hoping to fulfil the promise made to his former crew of sailing around the world, Brook joins the Straw Hat Pirates fifty years later.

Brook can influence others through music, often making them fall asleep. While an exceptional violinist, Brook is skilled in combat as well, especially with a Japanese cane sword known as a shikomizue. Eventually, Brook’s Devil Fruit ability, when harnessed, allows him to leave his skeletal body and explore the environment as a soul.

“Black Leg” Sanji belonged to the Vinsmoke family, raised under his father Vinsmoke Judge, who only ever saw Sanji as a born-and-bred soldier. When he escapes to Baratie, Sanji learns how to cook under “Red Leg” Zeff and adopts his fighting style, which typically involves the use of legs in battle. In the manga, specifically Vol. 8 Chapter 68, Don Krieg, admiral of the Krieg Pirates, is decimated — along with his crew — by Dracule Mihawk in the Grand Line.

Following Krieg’s defeat, Sanji joins the Straw Hat Pirates as cook. Sanji is extremely loyal and admirable, as proven in Thriller Bark, where he offers up his own life in exchange for Luffy’s. Often considered to be one of the deepest-written characters in the anime, Sanji has a complicated personality, but always remains true to his moral values.

It goes without saying, but obviousy, Monkey D. Luffy was the founder of the Straw Hat Pirates and therefore the crew’s first member. At just 17, Luffy set sail to travel the seven seas in search of the “One Piece” treasure, hoping to succeed Gol D. Roger as the one and only King of the Pirates. Luffy is the son of Monkey D. Dragon, the leader of the Revolutionary Army.

Joining the Straw Hat Pirates during the Wano Country Arc, Jinbe is an equal parts whale and shark fish-man whose biggest goal is to achieve coexistence and equality between humans and fish-men. He was formerly a member of the Sun Pirates, eventually taking over after the death of the captain, Tiger. At one point in time, Jinbe was one of the Seven Warlords of the Sea, but he resigned during the Summit War of Marineford. Sometime during that war, Jinbe befriended Luffy, whom he joined in preventing the political dispute between the New Fish-Man Pirates and Ryugu Kingdom’s Neptune Royal Family.

Afterward, Luffy invited Jinbe to join the Straw Hats, an offer which he withheld until he had severed ties with Big Mom (Charlotte Linlin), one of the central antagonists of the Wano Country Arc. Once Jinbe had left the Sun Pirates after helping them one last time, he announced his status as an official Straw Hat.

The Straw Hat’s medical personnel, Tony Tony Chopper joined at the end of the Drum Island Arc. He was appointed one of the Nine Senior Officers of the Straw Hat Grand Fleet. Chopper, born a reindeer, ate the Hito Hito no Mi, a Devil Fruit that allows the consumer to turn into a human — or human-hybrid — at will. It was Doctors Hiriluk and Kureha — Chopper’s parental figures — that taught him to become a professional doctor. His dream is to travel the world and hopefully cure all diseases, which is certainly the most ambitious of all the Straw Hats’ desires.

There was a short period of time where Tony Tony Chopper was forced to join the Foxy Pirates during the Long Ring Long Land Arc, but he eventually found his way back to the Straw Hats.

Effectively acting as Luffy’s right-hand man, Roronoa Zoro was the second to join the Straw Hats, doing so during the Romance Dawn Arc. Acting as one of the Straw Hat’s trusted combatants, Zoro is a skilled swordsman and bounty hunter. Also one of the Nine Officers of the Straw Hat Grand Fleet, Zoro is the master of the Three Sword Style, a fighting style conceived during his childhood at Shimotsuki Village. Alongside Luffy and Sanji, Zoro is one of the three strongest members of the Straw Hats, therefore making him a formidable opponent. Zoro promised his deceased friend, Kuina, that he would become one of the greatest swordsmen that ever lived.

Long story short, Zoro agreed to be tied to a pole in Shells Town, where Helmeppo carelessly released his pet wolf into town. Before it could devour a girl named Rika, Zoro saved her by killing the wolf. To repent for his actions, Zoro agreed to receive punishment to gain amnesty, which is where Luffy first encountered him. Presumably, Luffy had heard of Zoro’s deed and invited him to join the Straw Hats, but he flatly refused. Before Zoro could be executed, as per Helmeppo’s orders, Luffy retrieved Zoro’s swords (which were taken from him during the ‘arrest’ of sorts) and Zoro — refusing to be killed — joined Luffy’s crew.

Born “Cutty Flam,” but nicknamed Franky, the so-called “Iron Man” is the shipwright of the Straw Hat Pirates and also one of the Nine Officers commanding the Straw Hat Grand Fleet. Franky would join the Straw Hats at the end of the Post-Enies Lobby Arc. Abandoned by his family at four years old, Franky became a middle-class worker, but a severe incident resulted in extreme damage to most of his body, forcing him to augment himself into a cyborg. When he returned, Franky became the leader of the Franky Family, a notorious band of bounty hunters.

Originally, during the Water 7 Arc, Franky was an enemy of the Straw Hats, but circumstances changed and forced them to become allies. An expert craftsman, Franky’s dream is to build a ship and circumnavigate the world in it; he created the Thousand Sunny and joined the Straw Hats to bring him one step closer to achieving his goal.

Usopp joined at the end of the Syrup Village Arc and is once again one of the Nine Senior Officers of the Straw Hat Grand Fleet. Despite leaving the crew during the Water 7 Arc, Usopp rejoined at the end of the Post-Enies Lobby Arc. Before the Straw Hats, Usopp served as the captain of the Usopp Pirates in Syrup Village, where he was born and raised. He dreams of becoming a valiant warrior like his father, despite his cowardice.

After helping the Straw Hats defeat Kuro and the Black Cat Pirates, Luffy invited Usopp to join the crew — an offer which he gladly accepted.

The daughter of Nefertari Cobra and Titi, Nefertari is the princess of the Arabasta Kingdom and previously part of the Suna Suna Clan. Originally, Vivi appeared as a bounty hunter under Baroque Works in the Reverse Mountain Arc, however, once she was discovered to be a spy plotting against them, Vivi joined the Straw Hat Pirates. Right now, Vivi is reported as missing and has been since the end of the Wano Country Arc. She left the Straw Hats after defeating Baroque Works, but Luffy and the others still consider her to be a member of the crew. Vivi has been keeping tabs on them throughout the series.