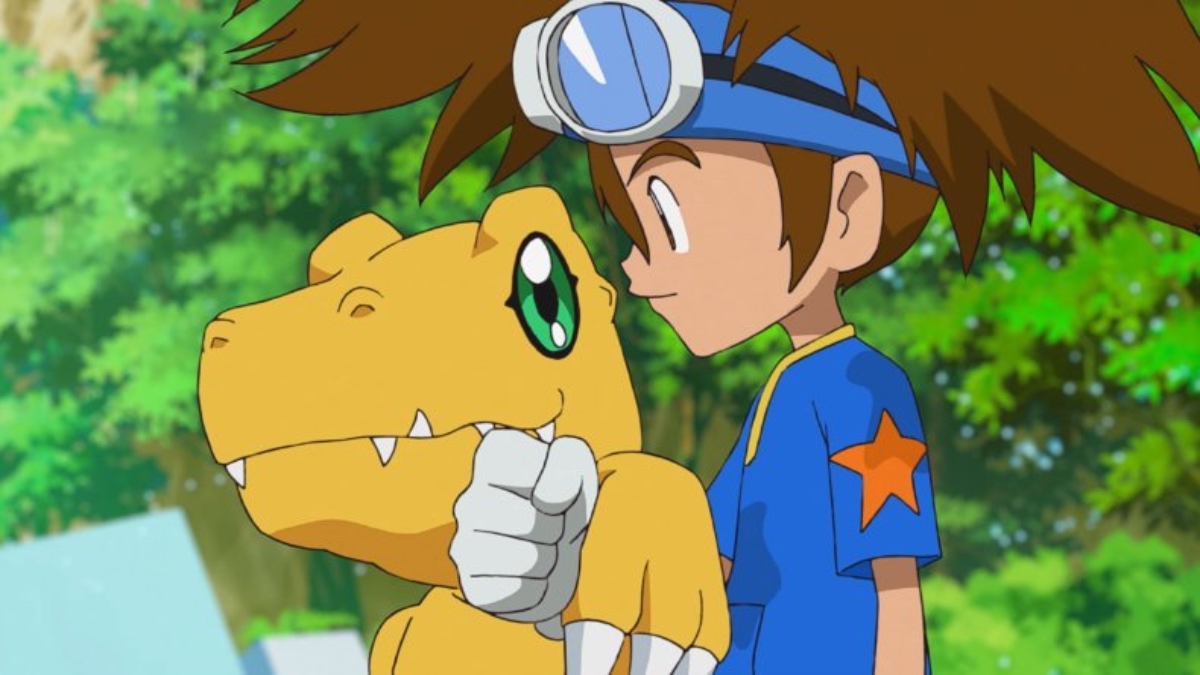 After it was announced not too long ago that Ash and Pikachu would be leaving the Pokémon anime after 25 years, it came as a complete shock, especially since its pocket-monster competitor, Digimon, already ‘ended’ back in February 2020 with Digimon Adventure: Last Evolution Kizuna, set five years after the events of Digimon Adventure tri. While Pokémon began airing in 1996, it wasn’t until 1999 that Digimon Adventure was born. Following a group of pre-teens — Tai, Matt, Sora, Izzy, Mimi, Joe, T.K. and Kari — known as the DigiDestined, Digimon Adventure tells the story of how the DigiDestined discovered mysterious, cybernetic creatures known as Digimon and became entrusted with the task of defending the Digital World from evil-doers.

As of 2021, there have been nine Digimon series overall — Digimon Adventure, Digimon Adventure 02, Digimon Tamers, Digimon Frontier, Digimon Savers, Digimon Xros Wars, Digimon Universe: Appli Monsters, Digimon Adventure:, and Digimon Ghost Game — all of which contain memorable moments for Tai and the gang, who saw themselves aged-up and no longer able to battle alongside their Digimon. In the end, the Digimon ceased to exist, leaving our heroes in mourning but relieving them of their duties as DigiDestined so that they may pursue other dreams — such as attending college. There’s so many significant moments to pinpoint in Digimon, and as we look back on all the DigiDestined’s adventures, it’s hard not to reminisce.

When confronting Devimon in “Angemon’s Awakening!,” T.K. and Patamon find themselves cornered with slim chances of survival. All the Digimon attempt to defend them, but Devimon unleashes a wave of darkness that knocks out all the Digimon and DigiDestined. As a result, only T.K. and Patamon remain able to fight, so when Devimon reaches out to grab T.K., Patamon uses Air Shot, but the move fails to deal any damage. In a desperate attempt to protect T.K., Patamon flies between them, getting caught in Devimon’s clenched fist. While inside Devimon’s fist, Patamon — after being unsuccessful for so long due to T.K.’s young age — manages to Digivolve into Angemon, his next stage of evolution.

Since T.K. and Patamon are the last ones to Digivolve, the Digivolution isn’t special anymore, but there’s nothing more satisfying than watching the underdogs fight back. Eventually, Angemon unleashes a Heaven’s Knuckle move to combat Devimon, but the required power overwhelms him, resulting in both Angemon and Devimon dissolving into light and darkness, respectively. Angemon tells T.K. that they will meet again if he wishes for it, and later on, T.K. discovers another egg that hatches into Patamon’s baby form.

According to the strength of their bond, Digimon Digivolve faster and stronger with the help of their partners, in comparison to Digivolving alone. That isn’t to say that they can’t Digivolve without a human, but the process is much more strenuous and time-consuming. In “The Arrival of GreySkullmon,” Tai and the gang encounter another Greymon, this one hostile, but when Agumon Digivolves into Greymon to counteract, he’s no match for the opponent.

Tai, whose frustrations with losing are getting the better of him, decides to put himself in harm’s way to force Greymon to Digivolve further into SkullGreymon. This kind of Digivolution, known as a Dark Digivolution, causes SkullGreymon to turn on Tai and his friends, triggering a rampage until his energy drains and he reverts back to Koromon. Tai takes responsibility and Koromon forgives him, so it all works out in the end, but the arrival of SkullGreymon — from the animation to the character design — is a pure masterpiece.

Jumping to Digimon Adventure 02, which propels T.K. and Patamon to the lead roles, there’s a specific scene that isn’t easy to forget. In “An Old Enemy Returns,” T.K. confronts Ken, the Digimon Emperor, about his scheme to unleash Devimon — which occurred three years prior — and a fight ensues. Knowing that Ken instructed Devimon to attack them back then, an event which resulted in Agemon’s death and rebirth, T.K. takes justice into his own hands when encountering Ken.

Everything about this scene — especially the dialogue exchange between T.K. and Ken — makes the fiery battle that much better. Although there isn’t any Digivolution involves and instead good old-fashioned fists, it’s still amusing to see Ken get exactly what’s coming to him. There’s also a teachable moment for T.K. here, as he transforms from a crybaby into worthy warrior, more than capable of defending himself and making hard, adult decisions.

4. Agumon Digivolves into Greymon — “The Birth of Greymon”

The DigiDestined and their Digimon find themselves on the receiving end of Shellmon’s unforgiving wrath when they unknowingly trespass on its territory. The Digimon attempt to fight it, but since they’re all hungry, none of their attacks will land — except for Agumon. Tai helps Agumon by making a diversion, but Shellmon quickly counters by ensnaring Tai in its tentacles and trapping Agumon underneath its paw.

Knowing that he needs to Digivolve to defeat Shellmon and save the others, Tai’s Digivice glows and Agumon Digivolves into Greymon for the first time. As expected, Greymon defeats Shellmon with ease, sending the Digimon blasting through the air. Since Tai and Agumon are the main characters, it’s fairly self-explanatory as to why this moment had such an impact, but it’s remained dear to our hearts ever since.

We’ve already touched on this scene briefly, but there’s so many notable occurrences that it’s deserving of two separate spots. Agemon’s ‘death’ is the most tragic and prominent moment, but it’s Patamon’s first-ever Digivolution that’s just as important. As we mentioned, T.K. is the youngest DigiDestined, so it’s natural that he and Patamon are the last to Digivolve. Given his young age and inexperience, plus his and Patamon’s immaturity at times, it seemed that Digifans were waiting forever for T.K. and Patamon to undergo their first Digivolution.

Just like Tai and Agumon, the birth of Angemon occurs in a dire, life-threatening situation, likewise one where the DigiDestined are in danger and it’s the Digimon’s job to muster the strength and Digivolve. In this case, T.K.’s life is in jeopardy, so Patamon has to act fast. It’s almost like a right of passage for T.K. as he and Patamon earn the respect of the others.

2. The first Digivolutions — “And So it Begins…”

We had to include Digimon’s debut episode, “And So it Begins..,” in this ranking. It wouldn’t feel right to leave it out. When the DigiDestined meet their Digimon, they hatch from Digi-Eggs as Fresh-level Digimon, then eventually Digivolve into the In-Training form, which are the blob-like creatures that Tai and friends meet. Before the more advanced forms, such as Champion, Ultimate and Mega, Digimon exist in their Rookie forms.

These are the appearances that they’ll permanently keep until a Digivolution occurs temporarily. For Tai and friends, the Digimon’s Rookie forms were a complete surprise, and why they aren’t as powerful as Champion forms, their combined efforts were enough to defeat a Kuwagamon that targeted the group. After a barrage of combined attacks, the Digimon defeat the Kuwagamon and evolve into the forms they sustain for the remainder of the series.

In 2020, Digimon released its final feature-length film, Digimon Adventure: Last Evolution Kizuna, which serves as a finale to the ongoing Digimon Adventure series. Set five years after the events of Digimon Adventure tri., Tai and the other DigiDestined are approaching adulthood and remain undecided about the future and their aspirations. They discover that their Digivices are powered by the potential of children, and since they’re growing older, they’ve reached their full potential and no longer qualify to be DigiDestined. It is implied that other children will need to be chosen, just as they were.

There is a limited time before the DigiDestined are separated from their Digimon forever, so in the climactic sequence of the film, after achieving their “last evolution,’ the now-grown children prepare to say their final goodbyes to the retiring Digimon. In the emotional scene, Agumon comments on how tall Tai has gotten, while Matt plays the harmonica for Gabumon, who sways side-to-side contently. Both caught in a monologue, Tai and Matt look to their Digimon, who have presumably passed on. Is someone cutting onions?