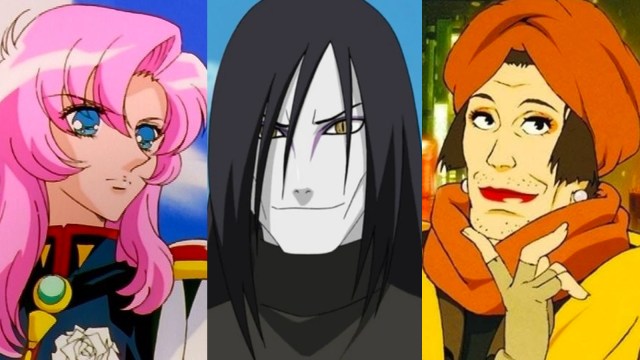 Not every queer character in anime and manga is a walking stereotype and not every character questions their same-sex attraction when in the middle of some hanky-panky. From a non-binary snake to a loud and proud gay ice skater, here are the 10 best LGBTQIA+ characters in anime.

There can’t be a list about the best LGBTQIA+ characters without mentioning at least one character from Revolutionary Girl Utena. The series was created by queer anime director Kunihiko Ikuhara (Penguindrum, Sailor Moon R: the Movie) and follows high schooler Utena Tenjou as she sword fight duels with members of the school council to win back her friend and classmate Anthy.

Utena is also arguably trans-male coded. While she uses she/her pronouns, she only wears boys clothes to school. Utena’s dream is to become Anthy’s prince and knight in shining armor after a brave young man with a sword saved her as a child. It’s a queerification of a classic fairy tale trope and a total serve.

Ash is a baby-faced yet ruthless New York gangster who meets, befriends and then falls for kindhearted Japanese boy Eiji. He’s a bit of a lone wolf — well, lynx — until he meets Eiji and takes him under his wing. He’s sassy, quick-witted and charming, but also someone surrounded by tragedy and loss.

Yuri on Ice is a revolutionary anime in the sports genre because unlike most shows it gives us a genuine same sex romance instead of a queer-baited one.

Victor is a pro-ice skater who just happens to be queer, reminding us that queer people can thrive in sport too. He’s loud and proud, obnoxiously camp, and talented. It’s his relationship with title character Yuri however and the fact nobody ever questions his sexuality that makes them so beloved.

A lot of people give Shinji slack for his chronic indecisiveness and inability to do simple tasks, but he’s just a depressed pansexual with daddy issues. Shinji shows an interest in both men and women in Neon Gensis Evangelion, developing feelings for Kaworu and ending up with Mari. But he can also be read as questioning.

Hana is a character unlike any other in Japanese animation. She’s a homeless trans-woman and former drag queen. She’s strong-willed, sensitive, extremely animate, compassionate, and religious. She jokes early in Tokyo Godfathers that she hopes to miraculously become a mother like the Virgin Mary, only to become a temporary surrogate mother to the newborn child she, Gin, and Miyuki find in a pile of trash.

Sailor Uranus and Sailor Neptune are Sailor Scouts and in a canonical queer relationship. Even when the original ‘90s dub retconned them as cousins, it was still painstakingly obvious they were a thing. They go out on dates, hold hands, and are intimate and vulnerable with each other. They’re girlfriends who fight to save the world together with their pals: fighting evil by moonlight, having brunch together by the daylight.

Sailor Uranus and Sailor Neptune were the first visible queer romance many anime fans saw on TV. Ignoring the original dub, what makes them great is how normalised they are. It was honestly a pretty big deal to see two women in love on a mainstream show like Sailor Moon.

Homura is a magical girl turned evil. She transforms into a demon and reveals she’s driven by her love for fellow magical girl Madoka. In a world where magical girls are destined to lose control and turn into mindless witches, Homura rewrites the universe so Madoka can live a normal life. She’s a complicated character and arguably did nothing wrong. She’s just a girl in love.

Hange is a fun-loving and passionate scientist obsessed with uncovering the truth behind the titans, but their gender has always been ambiguous and for a good reason. Attack on Titan creator Hajime Isayama told Kodansha Comics and his editor Hange’s gender was never meant to be explicitly stated. A spokesperson for the manga publisher told a fan in a post on the company’s official Tumblr back in 2014 they were told the character uses he and she pronouns “with equal frequency”. So really, they could be interpreted as gender-fluid.

Tomoyo Daidouji is Sakura’s best friend in Cardcaptor Sakura, and like most baby queers she has a diehard crush on her bestie. Sure, Sakura’s brother Touya is a stay-at-home boyfriend to Yukito and their relationship is historically one of the first major queer romances in anime. But Tomoyo’s unrequited love for Sakura is honestly more relatable for those of us with lived queer experiences.

Orochimaru’s gender has been noticeably ambiguous since Masashi Kishimoto first introduced them in the Naruto manga in the early 2000s. But their gender fluidity was officially confirmed in an episode of Boruto: Naruto Next Generations in 2018.

Orochimaru’s son Mitsuki asks Orochimaru if they’re his mother or father. Orochimaru tells him they’ve been a man and a woman at different periods of their life, and “outside appearances don’t matter”.

It’s a rather nuanced take from a show written by someone who can’t write women but Orochimaru is a gender fluid icon.