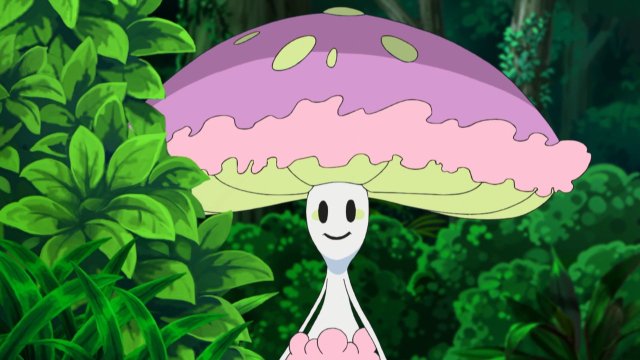 With all the bizarre Pokémon in existence, we wonder if the creators were influenced by—or under the influence of—shrooms. They created enough mushroom-type creatures to support that theory. The morel lore is so extensive that it comprises several types of fungi, including those that are parasitic, bioluminescent, and even culinary. Here are the five best Pokéverse spore-shooters. Since “best” is subjective, we’ve picked the shrooms based on their base stat totals (BST).

Shroomish is a Generation III Pokémon defined by its chill temper and lifestyle. It spends much of its time stuck to forest floors feasting on dead organic matter. Only when someone disrupts its simple existence will Shroomish get agitated and release poisonous spores. It’s a pretty powerful defense mechanism, which, combined with other shiitattacks, gives Shroomish a respectable BST (295) for a non-evolved Pokémon.

Parasect is the evolved form of Paras, which was the first Mushroom Pokémon introduced to the franchise. Like its predecessor, Parasect is comprised of a bug and a parasitic fungus attached to its back. The parasite has total control of its host. Although it removed the bug’s agency, the malicious mushroom gave it some potent powers. Parasect has a BST of 405.

Also with a BST of 405, Shiinotic is a shiitake-inspired Pokémon with very un-shiitake-like qualities. Most apparent of these is bioluminescence. Shiinotic’s light can confuse travelers and put enemies to sleep, after which it drains their energy like a squishy dementor. Conversely, it supplies energy to its allies. Shiinotic evolves from another bioluminescent shroom called Morelull.

Breloom is what happens to Shroomish after it learns MMA. Yes, aside from producing spores, this pugilistic Pokémon couldn’t be more different than its stationary precursor. Breloom’s combat skills and poison spores are a one-two punch that gives it a BST of 460.

Amoonguss is a humongous Mushroom Pokémon that evolves from Foongus, a tiny truffle which uses its Poké Ball-patterned cap as a lure. Amoonguss has three Poké Ball-patterned caps. With its balls exposed, it lies in wait for prey to approach and then hits them with a plume of poisonous spores. It’s not very effective, but what Amoonguss lacks in attack it makes up for in durability. Hit points account for 114 of its 464 BST.