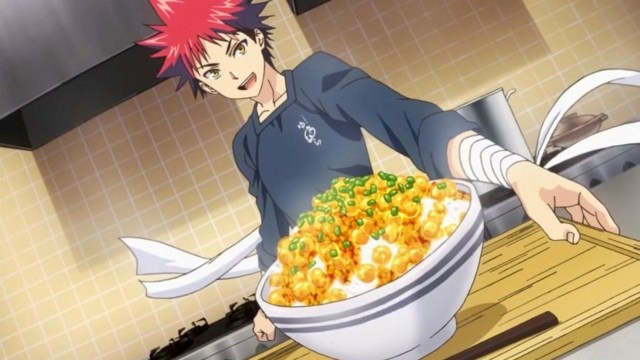 One of the most appreciated anime series dedicated to the culinary arts, Food Wars has been a hit since it’s debut. The series, known for its elaborate dishes and delicacies is a fan-favorite, no doubt because of the protagonist Akihisa Soma and the other interesting characters.

Food Wars is also known for its constant fan service, displayed by characters having foodgasms after taking a bite out of the edible creations. From expressive moans, to losing their clothes as a reaction, Food Wars has spurred some of the most hilarious anime memes on social media.

There is a wide variety of meals on the show, and naturally, some are more delicious and expensive than others. Whether it’s by using everyday ingredients to make masterpieces, or sourcing out some of the finest meats to create complex dishes, here are the most expensive meals showcased in Food Wars.

Insalatta Frittata is an Italian dish made by Takumi Aldini for the breakfast buffet challenge during the Totsuki Friendship and Rapport Training Camp. It takes inspiration from Takumi’s Italian roots. It is an omelet meant to be eaten with a salad by breaking the frittata into rough chunks and combining it with lettuce, cherry tomatoes, and English cucumber. Parmesan cheese is then added with Balsamic vinegar. Insalatta Frittata its refreshing taste from the vinegar and is a breakfast dish you can make at home or buy in a restaurant for $8.

Kozhi Varutha Curry is an Indian dish made by Akira Hayama for Soma Yukihira and Megumi Tadokoro at the Shiomi Seminar to show off the power of spices. Akira made his signature curry dish that uses water and not coconut milk. The meal can be translated to “fried chicken curry” and it contains chicken meat, curry leaves, onions, cayenne chili peppers, and some of the finest spices in the world in Tamil Nadu. Chicken Curry is a popular dish that is normally served with rice and goes for around $15 at most restaurants.

These Semifreddo variants were made by Subaru Mimasaka and Takumi Aldini respectively for their quarter final bout. Subaru had originally copied Takumi’s dish with his ability ‘Perfect Trace’, but Takumi added a secret fourth layer to give himself the overall edge. The first layer has Scattered Pralines; the second layer has Ice-Cream (Meringue and Heavy Cream); the third and final layer for Subaru was Genoise; and Takumi had a fourth and final layer for his adding lemon curd made with eggs, sugar, lemon juice, lemon zest, butter, and olive oil. Takumi was able to again mash two cultures together. You can get a semifreddo for around $29-$49.

The first entry from Soma Yukihira on this list is a French dessert cake, with the primary ingredient being mountain yam. Soma made this to combat Sarge in the BLUE arc of the series. A cake entirely free of dairy or added sugar, the dish used a broken ice-cream spoon to texture the outside, making it resemble a log. It is based on the Christmas tradition in which the act of burning a log symbolizes a new beginning for a new year. It starts with a cocoa-flavored sponge cake that is filled with cocoa hazelnut whipped cream, chocolate ganache with meringues, sugared cranberries, and rosemary. It ranges from $28-$63 during the holiday season in France.

A Squid based meal made by Rindo Kobayashi to combat the Calamari Ripireni made by Takumi Aldini in their fourth round bout, the dish contains a fluffy squid hamburger, spear squid, egg whites, onions, lemon, and mayonnaise, along with lightly fried soy sauce. Rindo used irish potatoes that act like lightly pressed sushi and was dyed with Aji Amarillo. Normally the hamburger should contain tuna, but Rindo used Arapima instead, which has properties similar to chicken. With her expertise, she tamed the flavors and made a quality dish. Spear Squid will most set you back about $50.

This dish was made by Eishi Tsukasa during his match against Satoshi Isshiki during the second card of the fourth bout of the Regiment de Cuisine. Tsukasa was the current top chef at the academy at the time, and he made the dish into five parts: Liévre Ensemble, Rabbit Blood & Chocolate Sauce, Royale Custard, Chestnut Confit, and a Fig-Apple with Black Truffles added to bring out the richness. The meal, as usual, blew the judges away. Lièvre À La Royale goes for around $60 in many restaurants in France.

The next four are specialty meals made by the four best cooks in the academy. Signature meals from chefs usually range from $400-$1000 depending on the quality of the chef.

The series protagonist Soma Yukihira made this his signature dish and he used it in the fifth bout of the Regiment de Cuisine. It looks like the meat associated with the Stone Age, but Soma infused some of his best dishes into the meal to make the best appetizer he had yet. He infuses beef slices, bacon, marinade, yakiniku sauce, honey, grated onions, and orange juice.

The meal made by Erina Nakiri, with the help of Soma Yukihira, to battle and finally win against Central in the Regiment de Cuisine was a Japanese-French main course. It is cooked from an unexpected culmination of snacks, including squid and peanut butter, to make a very delicious meal. The main ingredients of the meal are: high-grade chicken, minced squid, peanut butter, scrambled eggs, furikake, and Nikogori. The term “Le Plat Veritable” translates to “the true plate.”

This meal is Rindo Kobayashi’s appetizer specialty and she made it during the Regiment de Cuisine. A mushroom meal based on French Cuisine, as this dish is made by using the formic acid from ants, paired with the rich and mellow flavors of the mille-feuille. The meal hails from as far back as the times of Napoleon and is still a top pastry in France to this day

The final meal made by the head of the Totsuki Ten, Eishi Tsukasa, White Armour Plate is a French cuisine with Venison Roast as the main ingredient. The meal is Tsukasa’s specialty, and by using the salt-crushing method, he was able to concentrate the delicate flavors, juices and blood of the venison to bring out its most delicious form. Due to the sheer beauty of the dish, one of the judges, Anne, was afraid to take a bite out of it. When paired with Rindo’s Mille-Feuille, anyone eating the White Armour Plate gets taken to Gourmet Eden.