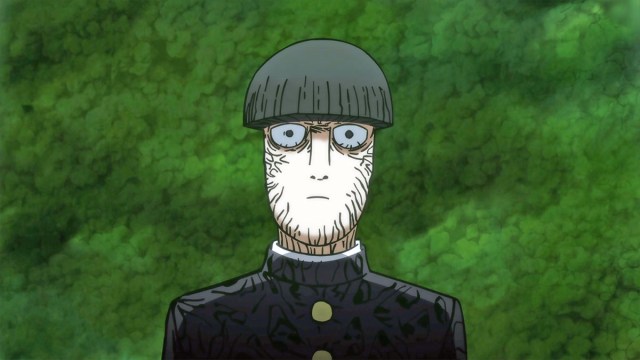 The newest Mob Psycho 100 III episode has had some understated progress in Seasoning City. As per the development from earlier seasons, the city, where Mob and Reigen live, has undergone some placement changes — namely, the giant broccoli that arose from the ground as a result of Suzuki and Mob’s battle, when the latter went ballistic with a head of the vegetable in his pocket. This caused the gigantic greenery to blossom, getting the name “Divine Tree,” and gathering a number of followers in a religion called “Psycho Helmet Cult.”

Since the appearance of the Divine Tree, several people have come forward claiming to be the founder of the giant vegetable and wishing to be placed at the front of the cult, thus getting monetary gains as well as popularity. As the rightful founder, Mob never staked his claim until the two most recent episodes, when he decided to eventually declare his position as the creator of the tree, naturally for questionable reasons: he wanted to look cool in front of his crush.

This would backfire as someone, nearly identical to Mob would come forward as the founder, with extraordinary psychic powers to back up his claim. But who is this mysterious figure impersonating Mob?

Who is the Psycho Helmet?

Psycho Helmet takes on the appearance of the Psycho Helmet Cult’s logo, looking eerily similar to Mob in comparison, although with distinct features separating him from the true founder. His outward look is made up of what looks like tree roots, and he is wearing a Salt Mid uniform, much like Mob’s outfit from school. The impersonator also preaches about peace and happiness, seemingly having traits of the god complex syndrome, all while hypnotizing and brainwashing the people of the city to force them to become fully devoted to him.

What hasn’t yet been disclosed in the anime is that Psycho Helmet is actually the aftermath of Dimple — the spirit who’s friends with Mob — merging with the roots of the Divine Tree. The reason why he does this is to finally achieve his original goal of becoming a god of the modern world after Mob seemingly refused to take the role of the founder and allowed Dimple to lead the cult.

This wasn’t the first time Dimple has hypnotized a surge of people. During the Cult Arc, Dimple founded a cult that amassed several dozen people in just a month and made his followers put on smile masks that possessed a hex forcing people to laugh. This character, although ambiguous, isn’t necessarily evil. Dimple just intends to be worshipped by all humanity, trying to get there at any cost, in spite of his closeness with Mob and Reigen. Unfortunately, his ultimate creation will lead to life-threatening situations from the moment Psycho Helmet seeks individuality, becoming its own entity outside of Dimple’s influence, and retaining its desire to take over the world.

Although it was fairly easy to connect all the dots leading to the discovery that Dimple was behind Psycho Helmet, no one could have foreseen that this creation would gather its own free will.

The remaining episodes of the Mob Psycho 100 III season will be airing on Crunchyroll every Wednesday at 12 pm ET.