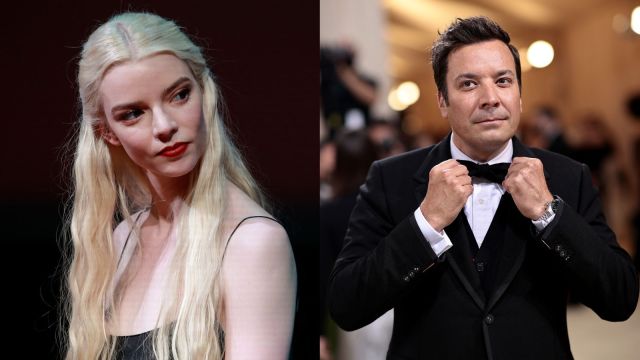 Dead man walking, Jimmy Fallon, who found himself being victimized by the hot trending Twitter hashtag #RIPJimmyFallon, opened his show with a gospel number, singing “I’m alive!” before receiving gratitude from his guest that he is, in fact, not dead.

Fallon also had some jokes, saying that because his fake death was trending, Ticketmaster kicked him out of line for Taylor Swift tickets. He probably should’ve added that, even so, he would still get tickets faster than Swifties.

The first guest of the night was Anya Taylor-Joy of Queen’s Gambit fame. There to promote her new film, The Menu, Taylor-Joy happily told Fallon, “I’m particularly glad that you’re not dead because, I don’t know if you know this but, you actually saved my life once.”

Fallon, unsure if Taylor-Joy was being serious or not, was curious to hear the story.

“It was at the Met Gala. My first and only time being there. I was wearing a dress that was ridiculously heavy and I couldn’t really move and I was just kinda trying to get through the evening and at the end of the night, I’m on the top of the stairs, the gorgeous Hailee Steinfeld walks past me and she has a very complicated like three-train thing and I get wrapped up in it and I’m like, ‘Oh, I’m gonna die. I’m gonna die on the steps of the Met.'”

Was Anya about to take a dive down the stairs? It appears she believed she was going to until, as she puts it, “Out of nowhere, the hand of god came out and pulled me out of it and it was you.”

The sweet story by Anya made Fallon laugh in embarrassment and Taylor-Joy added that he then introduced himself to her. Fallon replied, “I do remember that. You were going down!”

What if the recent dark Fallon rumors were true? What if he wasn’t around anymore to save people from falling down stairs? Would we all be trippin’?

Let us be thankful that we can’t presently know the answer because Fallon still very much lives among us.