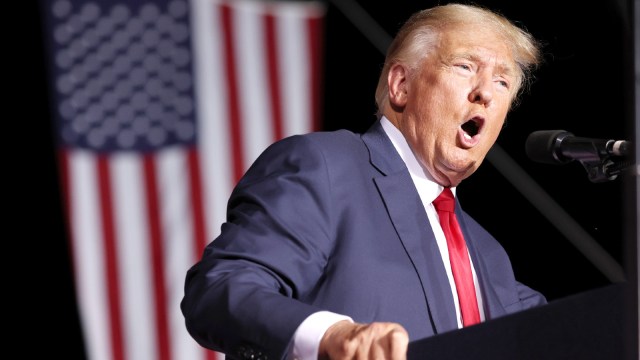 Elon Musk confirmed on Thursday morning that he had indeed gone through with his $41 billion acquisition of Twitter, revealing the news in a lengthy statement on the platform that seemingly outlined his motivations for buying the company.

“The reason I acquired Twitter is because it is important to the future of civilization to have a common digital town square, where a wide range of beliefs can be debated in a healthy manner, without resorting to violence,” the 51-year-old SpaceX founder wrote. “There is currently great danger that social media will splinter into far right wing and far left wing echo chambers that generate more hate and divide our society.”

We have some bad news for the guy, Twitter was already a heavily divided cesspool long before Musk set his sights on it. And it sounds like things are going to quickly get worse, as he’s expected to reinstate notoriously banned Twitter accounts — including, yes, that of former President Donald Trump — as part of the regime change.

“Permanent bans should be extremely rare and really reserved for accounts that are bots, or scam, spam accounts,” Musk said earlier this year, just weeks after making his intentions known. “I do think it was not correct to ban Donald Trump. I think that was a mistake, because it alienated a large part of the country and did not ultimately result in Donald Trump not having a voice.”

The problem with Musk’s apparent self-whataboutism is that Trump was ultimately banned from the platform because he literally stoked violence leading up to, and during, the Jan. 6, 2021 insurrection on the U.S. Capitol building. That was violence. Five people died.

So Musk wants to give Trump his voice back while also avoiding having his reinstatement resort to violence. Great. Good luck with that. But speaking of “far right wing and far left wing echo chambers,” let’s take a took at some famously banned Twitter accounts that Musk might reinstate. And despite his both-sides-ism, you’ll find a heck of a lot more of the former than the latter on this list.

Unless the negotiations between Musk and Twitter included a stipulation that Trump was never, ever, ever going to be allowed back on the platform, we can probably already consider this done. There had been calls to ban Trump long before Jan. 6 due to the flood of misinformation and dog whistles that constantly dribbled from his account like ketchup dripping down the walls of the White House, but again, in the end all it took was getting five people killed.

Both Alex Jones and his alt-right website InfoWars were permanently suspended from Twitter in one fell swoop back in 2018 for repeatedly violating its abusive behavior policy. Just recently, Jones was ordered to pay nearly $1 billion to families of Sandy Hook victims for spreading misinformation that the horrific mass shooting tragedy was a hoax.

Former Breitbart editor and notorious troll Milo Yiannopoulos was finally given the permanent boot in 2016 for violating Twitter’s terms of service after being temporarily suspended several times and even having his verified status revoked. The thing that finally did him in? Yiannopoulos led the charge in harassing Leslie Jones following the release of Paul Feig’s all-women Ghostbusters reboot that effectively made giant baby men everywhere lose their collective minds. Good riddance.

A better question might be “what didn’t Martin Shkreli get banned for?” After being temporarily suspended in January of 2017 for harassing journalist Lauren Duca on May 3, 2017, the so-called pharma-bro, who notoriously jacked the price of an AIDS and cancer treatment medication from $13.50 to $750 per pill, announced on Facebook that he had been permanently suspended from the platform. Though Twitter declined to elaborate, his apparent suspension came just days after he leaked two tracks from Lil Wayne’s then-unreleased album “Carter V,” which he had acquired the December before.

After getting the boot, Shkreli briefly attempted to tweet from a new account, @TrashyTheCat, that he had named after a rescue cat he adopted from Philadelphia, however that account was likewise quickly squashed.

Steve Bannon is one of those public figures who you’d have to figure came out of the womb suspended from Twitter — but no, it took until Nov. of 2020 before he became a member of the exclusive club. And all it took was for Trump’s former White House chief strategist to call for the beheadings of Dr. Anthony Fauci and FBI Director Christopher Wray.

“I’d put the heads on pikes. Right. I’d put them at the two corners of the White House,” Bannon said in a since-deleted video that he posted to Twitter, as well as other social media platforms. “As a warning to federal bureaucrats: Either get with the program or you’re gone.”

But thankfully, even if Bannon’s account gets reinstated, you can’t tweet from prison, where he is currently headed for a four-month extended vacation.

Trump’s former campaign advisor Roger Stone was first banned from Twitter in Oct. of 2017 for accusing CNN’s Jake Tapper and Don Lemon, as well as New York Times columnist Charles Blow of being “fake news” and attacking them with derogatory slurs. Interestingly enough, this past April, Stone attempted to rejoin the platform after news broke of Musk’s planned acquisition, because he wanted “to see how strong Elon Musk’s commitment to free speech is,” but his new account was likewise swiftly terminated.

Far-right conspiracy theorist and convicted felon Jacob Wohl was permanently removed from Twitter after he admitted to USA Today in February of 2019 that he had been operating a ring of fake accounts in attempts to “steer the left-wing votes in the primaries to what we feel are weaker candidates compared to Trump.”

“It is not illegal, unethical, or untoward for Americans to steer an American election,” he later told NBC News. “I’m an American.” He sure is — an American who is no longer allowed on Twitter. Though, that may regrettably change soon.

Georgia Rep. Marjorie Taylor Greene’s personal Twitter account was first temporarily suspended from Twitter in Jan. 2021 for violating the company’s “civic integrity” policy, which was intended to crack down on QAnon-related accounts. (As of now, her official government account is still active) However, just a year later, she was handed down a permanent suspension for “repeated violations of [the company’s] COVID-19 misinformation policy.”

When Greene received her first temporary suspension, Trump conspirators Michael Flynn and Sidney Powell were given no such grace. Amid spending time with the former president at the White House in efforts to undermine the 2020 election and overturn the results, Flynn and Powell were both casualties of Twitter’s Qanon sweep.

“The accounts have been suspended in line with our policy on Coordinated Harmful Activity,” a spokesperson told NBC News. “We’ve been clear that we will take strong enforcement action on behavior that has the potential to lead to offline harm, and given the renewed potential for violence surrounding this type of behavior in the coming days, we will permanently suspend accounts that are solely dedicated to sharing QAnon content.”

Writer and podcaster Ira Madison III was cut a bit of a raw deal with his permanent Twitter suspension, which stemmed from a prank. Ahead of the presidential election in November 2020, Madison changed his name to Beto O’Rourke and tweeted: “I’ll drop my nudes if Texas goes blue.” He was quickly suspended on grounds of impersonating O’Rourke, which is one thing that the company really does not mess around with — regardless of the promise of nudes.

You probably didn’t have “Tila Tequila turns to Nazism” on your 2016 bingo card, but what can we say, it was a wild year. After expressing increasingly worrying neo-Nazi rhetoric as far back as 2013, the former MySpace queen — who was born to a Vietnamese family in Singapore and later raised in Texas — tweeted a photo of herself performing a Nazi salute with two men at the alt-right National Policy Institute gathering in Washington, DC, which had been organized by white supremacist Richard B. Spencer. She captioned the photo “Sieg heil!” and was subsequently thrown off the platform.

“MyPillow guy” Mike Lindell was likewise permanently banned as part of Twitter’s civic integrity policy in Jan. 2021 after he continued to falsely insist that Trump won the 2020 election. Though he attempted to rejoin the platform earlier this year under a new account, that account was quickly Whac-A-Mole’d out of existence by the platform for violating rules on ban evasion.

Like a few others on this list, the former San Francisco Giants player was banned from Twitter in August of 2021 after repeatedly violating the platform’s COVID-19 misleading information policy. Among Huff’s false claims about the pandemic which had killed over four million people by that point, was that the COVID-19 vaccine made people sicker than the virus itself, apparently. Bye bye!