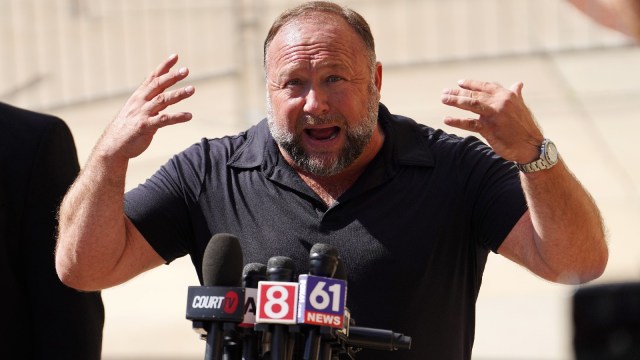 Alex Jones now has a court-ordered amount of nearly $1 billion to pay after he lost a high-profile lawsuit in Connecticut that named him as a defendant.

The jury who handed down the $956 million judgment in a Waterbury courthouse sided with the families who sued Jones “who suffered from his false claim that the Sandy Hook Elementary School shooting was a hoax,” according to Associated Press.

The 15 plaintiffs who won the lawsuit include victims’ families and an FBI agent, with a jury determining the defamation damages and emotional distress damages for each one. Testimonies during the trial included victims’ family members who “testified about being harassed by people who say the shooting was staged in a plot for more gun control,” NBC Connecticut reported.

This isn’t the only lawsuit Jones has been embroiled in lately. One trial in Texas a couple of months back ordered Jones to cough up $50 million in damages to a victim’s family member. Though the Texas trial concluded in August, another trial in Jones’ hometown is slated to begin before the end of the year, according to CBS News.

Jones was not present when the verdict was read, but his Infowars show streamed the live video of the courtroom via a split screen. Though Jones admitted in court the shooting was real, and said he was wrong about Sandy Hook, he’s also been defiant during the trial and on his show. He even called the proceedings a “kangaroo court” and mocked the judge at one point.

The emotional tone of the trial from the testimony of the parents and siblings of the victims, who tearfully recounted about the years of harassment from people who believed Jones’ lies, culminated in some of the plaintiffs exchanging hugs when the verdict was finally read aloud.