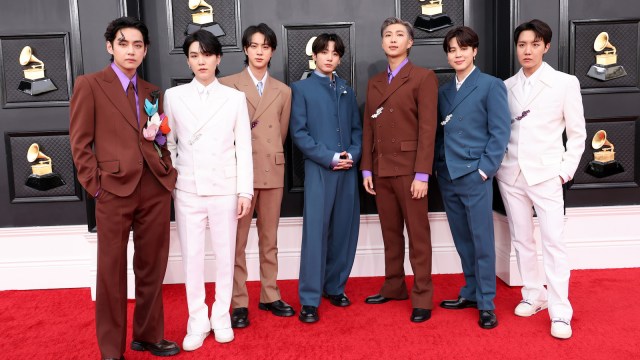 Not a lot of celebrities can break the internet with a simple post, but the members of BTS come dangerously close every time they share something on social media. The latest culprit is SUGA, or more accurately, his hair.

The rapper shared a nonchalant picture from a yet unknown photoshoot on Instagram where he shows off his new look, and fans are obsessed. This is the longest SUGA has grown out his hair, and considering the break BTS are currently taking from most group activities, ARMYs haven’t had a lot of chances to get a closer look.

In the black and white picture, which he also made his new profile picture, SUGA’s hair is styled to appear disheveled and unruly – a strike contrast with his steely expression and smart white shirt. Fans have theorized that this might be a sneak peek into the artist’s photopholio, as part of a group-wide project to celebrate each member’s birthdays. So far Jungkook, RM, and Jimin have shared their pictures with the creative direction being chiefly their responsibility.

With ARMYs already losing their minds over one picture, who knows what kind of chaos the entire photoshoot might unleash once it’s out?

The rapper-producer had already made quite the impression when he was seen at Incheon Airport on Sunday before flying to the US. The main topic of discussion was once again his hair, with a video where he casually ruffles it drawing in over 100 thousand likes on Twitter.

Known for changing hairstyles often, the BTS members never grow out their hair for long, usually cutting it short right before an event or important shoot, but ARMYs are adamant SUGA steers clear of any scissors.

BTS is currently gearing up for a massive free concert in Busan, South Korea, to promote the city’s bid to host the 2030 World Expo. The concert will be attended by an estimate of 100 thousand fans and will be streamed live worldwide on HYBE’s own social network Weverse Oct. 15.