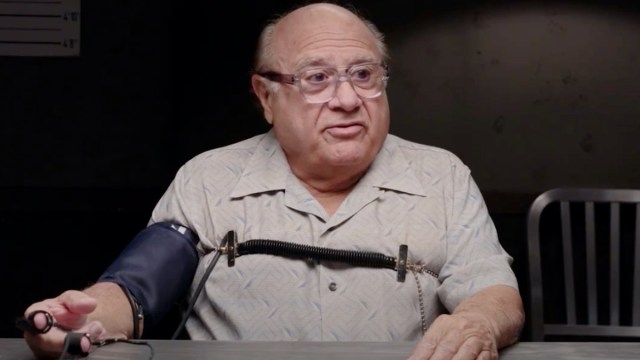 Danny DeVito and his daughter Lucy DeVito are currently starring in a new animated FXX series Little Demon, about a teenage girl from Delaware who learns that her father is Satan himself and, as such, she’s the antichrist. While promoting the new series, the pair sat down with Vanity Fair for the magazine’s lie detector test video series to grill one another while hooked up to the machine.

The elder DeVito went first, and after a few straightforward questions about his name and who his favorite child is, Lucy got into the nitty gritty.

Sliding a photo of a familiar face across the table, Lucy started to ask: “Do you think this Batman…” “Is my favorite,” responded DeVito, before allowing her to finish. “This is my favorite. This is Michael Keaton. He was the Batman when I was the Penguin.” When asked if she should even bother showing the other Batman, DeVito responded with a blunt “no.”

So, it shouldn’t be shocking how DeVito answered the follow-up question of whose Penguin was better. The 77-year-old starred as the notorious Gotham villain in 1992’s Batman Returns, and later the decidedly un-Penguin-esque Colin Farrell played the character in 2022’s The Batman, opposite Robert Pattinson and Zoë Kravitz.

“Was that the truth?” he asked the lie detector technician, who answered to the affirmative. “It certainly was — in my opinion,” he continued, laughing. “It’s my opinion, yeah. Good man, though. Colin’s a good guy.”

Well, there you have it. Though, you can’t say the lie detector was wrong about that one, opinion or not. You can watch the entire segment below.