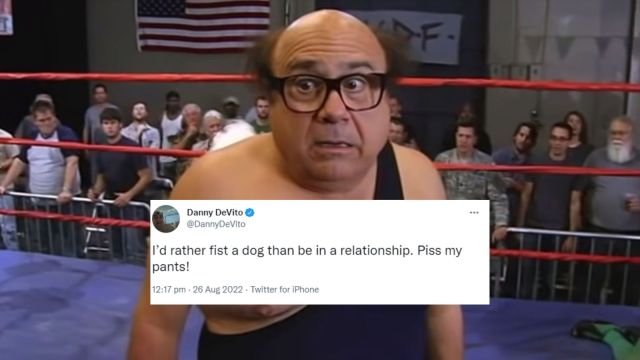 One of the greatest character actors of all time, Danny DeVito, has put the internet on high alert after a series of truly bizarre tweets.

On Thursday night, fans started getting considerably concerned after logging in and viewing a series of surreal and absurd tweets without any context. The tweets read like something Frank Reynolds from It’s Always Sunny in Philadelphia would say after drinking a crate of beer or going on one of his many drug-induced escapades, but they’re absolute pieces of art and something to behold.

Beginning the night with the beautiful phrase “get ready for some hot sauce”, it later went so far down a DeVito rabbit hole you’d be forgiven for thinking he’d just taken a recreational substance. Things got better and better, however.

Next was a tweet that also doubled as solid advice for any young person seeking to find their way in this universe: don’t fuck with the Antichrist. If only my father taught me that lesson. Oh yeah, and raise your hand if you “fucked the devil”.

Perhaps the Citizen Kane of his tweets however, was one about preferring to fist a dog than be in a relationship: with an epilogue that simply read “piss my pants”.

Other nuggets of wisdom included “I just wanted to get the mailman to fart”.

But what on Earth is actually going on here? Well, it turns out Danny DeVito and his family were livetweeting the first episode of his new animated series Little Demon, which aired its first episodes overnight on FXX. The beauty is that his tweets may go down longer in memory than whatever happens on the show, even if his online antics were enough to cause genuine concern.