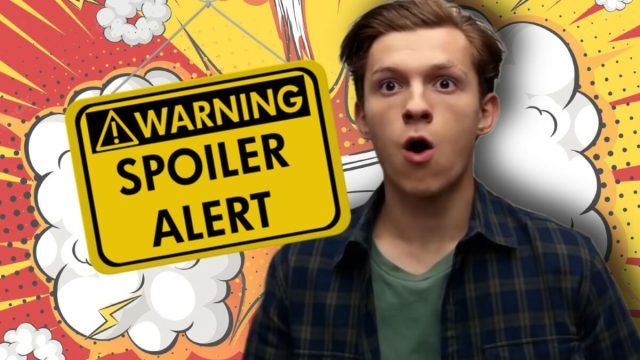 In the MCU, Tom Holland is credited for a lot of things — for saving the sinking ship that was Spider-Man, for making the seemingly impossible Sony-Marvel deal finally work out, for continuing to be the best Peter Parker ever, etc. But that one credit that he would gladly like to not be accounted for is being the official “Spoiler King” of the Marvel universe.

Oh, it’s not that Holland hasn’t tried to rectify the error of his ways — the young actor has sworn left and right countless times that he would not repeat his mistakes. But it is now beyond obvious that while he can detect any incoming danger in the MCU thanks to his character’s Peter-tingle, nothing allows Holland to sense that he is about to blurt out a major Marvel secret.

But no matter how big and official his blunders are, there is no denying that they have become iconic moments. To that add Holland’s blood-draining-from-his-face look the second he realizes the fiasco he has committed… icing on the cake!

There is no disputing the fact that Spider-Man: No Way Home has been the most poorly kept secret of Marvel Studios. The entire plot of the film was leaked months before even its trailer — which was also leaked, FYI — officially debuted. But everyone associated with the film, especially Tom Holland, determinedly kept denying Tobey Maguire and Andrew Garfield’s involvement in the film…

…at least until, his and Zendaya’s interview with BBC Radio 1 where he inadvertently revealed that there was going to be more than one Spider-Man in the film. And if anyone had any doubts about whether he did spew a spoiler, his “soul leaving his body” expression soon after sealed the deal.

Just like it’s impossible to rein in the Hulk the moment he goes on his rage-fueled rampage, there is no stopping Tom Holland from disclosing secrets the studio works hard to keep under tight wraps.

During an appearance on Jimmy Kimmel Live! to promote the then-upcoming Avengers: Infinity War, the cast members — Robert Downey Jr., Pom Klementieff, Zoe Saldana, and Paul Bettany — talked about the studio’s efforts to keep the film’s plot away from leaks and loose cannons like Holland by giving the cast fake scripts. The actors even pointedly highlighted the Spider-Man star’s habit of blurting spoilers and how he is thus never left alone to do interviews anymore.

But all their hard work went down the drain when Holland animatedly decided to add his two cents to the whole “getting fake scripts” topic by sharing how he thought he was reading a fake one too as it mentioned that Spidey is in space but then realized it was the real plot. We know, major whoopsy! Oh my, what wouldn’t we give to be there when the studio reprimands the actor for the zillionth time about why it is not nice to be a ticking time bomb waiting to spew plot secrets.

Accompanied by Benedict Cumberbatch, Holland engaged in a chat with Access Hollywood before Infinity War’s premiere and talked about how his co-star messed up his lines more during the film’s production because the poor sap had to keep jabbering about the “Quantum Realm” in it.

Though Cumberbatch tried to play it off, the damage was done as clever MCU fans were quick to add two and two together after Infinity War’s release and correctly theorized that the fleetingly mentioned Quantum Realm in the first Ant-Man film will be used to undo Thanos’ Snap in Endgame.

Seeing Holland’s penchant for unceremoniously dropping classified Marvel info, it is no wonder that the fictional superhero who has saved numerous lives single-handedly needs a babysitter (read: Spoiler Averter) every time he does an interview. Because evidently, leaving Holland to do an interview alone almost always ends up in Marvel Studios scrambling to put the cat back in the bag. But Holland has proved that he is a force of nature that no one can stop.

Spoiling Spider-Man: Homecoming when nobody even mentioned the film

This was one of his first instances of spoiling a Marvel film. If the question asked had been digging for spoilers, then it would have been easy to understand why Holland let slip a crucial detail about the film. But this incident took place while he was doing a Facebook Live interview before Homecoming’s premiere and was questioned about his experience of appearing in the stage musical Billy Elliot at the age of twelve.

Tom Holland being his usual chirpy, holding-nothing-back self, started talking about how his dance training for the same prepared him to do at least some, if not all, his stunts in his films now. He then proceeded to highlight a particular action sequence from his then-unreleased first Spider-Man solo film where Vulture drops Spidey in a lake to drown.

“There was a few things that I couldn’t do. There was, like, some time where they dangled my poor stunt double under a helicopter and dunked him in a lake.”

It wasn’t long before he realized what he had done and clapped a hand over his mouth in horror over his slip-up before lamenting how much trouble he will be in (with the studio).

Apparently, the general audience is not the only one running the risk of getting exposed to Holland’s spoiler-dropping spree. So far, the actor has only exposed mild leaks about Marvel films but imagine what would have happened if he had ended up revealing Iron Man’s death in Endgame before the film was released? That would have been one A-grade disaster!

Well, it did happen but fortunately (for us), only Zendaya was on the receiving end of the unwanted spoiler!

A similar incident happened with Ms. Marvel star Iman Vellani who was waiting to see No Way Home and shielding herself from any possible leaks, only for Holland to effectively ruin her plans by showing her a picture of himself with Maguire.

Though Marvel Studios must really want the actor to curb this particular superpower of ruining movie plots, here is to Holland and many more such spoilers. After all, the fandom survives the big time gaps between films by spinning speculations, and thanks to Holland’s hobby of “sharing” plot twists, MCU fans have a constant source of the fuel they need to keep their heated debates and wild theories going.