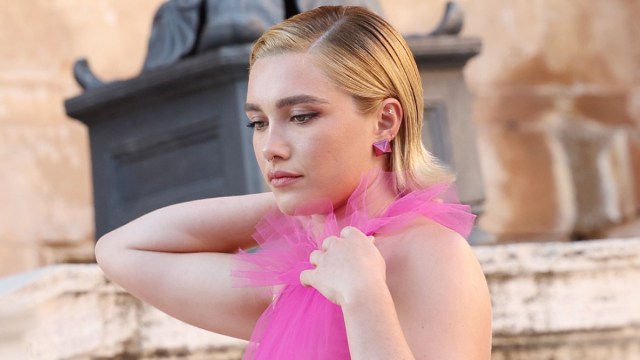 Florence Pugh is no longer in a relationship with Zach Braff after three years and plenty of input from strangers.

The 26-year-old British actress confirmed in a new Harper’s Bazaar profile this week that she and the 47-year-old actor and filmmaker quietly decided to end things earlier this year.

After collaborating on Braff’s short film, In the Time It Takes to Get There, the pair was first spotted holding hands in New York City in April of 2019. Over the course of their three-year relationship, Pugh and Braff faced no shortage of speculation over their 21-year age gap, which is perhaps why they decided to keep even their breakup under wraps.

“‘We’ve been trying to do this separation without the world knowing, because it’s been a relationship that everybody has an opinion on,.We just felt something like this would really do us the benefit of not having millions of people telling us how happy they are that we’re not together. So we’ve done that. I automatically get a lumpy throat when I talk about it.”

Though it’s currently unclear what led to the split, Pugh suggested that being in the public spotlight was not easy on her or the relationship and that it felt “incredibly wrong” when paparazzi would capture private moments.

“I don’t think that people, just because they have this job, that every aspect of their life should be watched and written about,” she explained. “We haven’t signed up for a reality TV show.”

Speculation into Pugh’s personal life first went into overdrive when she was spotted vacationing with her Midsommar co-star Will Poulter in Ibiza back in May. At the time, she took to Instagram to shoot down the rumors.

“Ooookay. Man. This is getting a little silly now. No, Will Poulter and I are not dating,” she explained. “We went to the beach with our friends, who are always about half a metre away from us in every picture, but have been cleverly cut out/framed out so that it looks otherwise. You can LITERALLY see my best friend in the corner of so many shots and Archie [Madekwe]’s arms at the sides.”

“I understand that the nature of this job is that you sometimes get your privacy bulldozed by paparazzi but to fabricate this stuff does more damage than good,” she added. “Thanks for saying we look sexy … doesn’t mean we’re doing the sexy.”

Before their split, Pugh collaborated with Braff on his upcoming film A Good Person, which also stars Morgan Freeman and Molly Shannon and is due out in theaters next year. Despite the unfortunate circumstances, Pugh had a great experience working on the film.

“The movie that we made together genuinely was probably one of my most favorite experiences,” she told Harper’s. “It felt like a very natural and easy thing to do.”